All
A B C D E F G H I J K L M N O P R S T U V W Y Z
lake ice
floating ice formed in lakes.
lake talik
a layer or body of unfrozen ground occupying a depression in the permafrost table beneath a lake.
lamina
thin plate, sheet or layer; laminae (plural).
land sky
the relatively dark appearance of the underside of a cloud layer when it is over land that is not snow covered; this term is used largely in polar regions with reference to the sky map; land sky is brighter than water sky, but is much darker than ice blink or snow blink.
lapse rate
the rate of change of any meteorological element with height.
large-scale atmospheric processes
atmospheric processes with a representative scale (large-scale) of 10,000 kilometers (6,200 miles); in meteorology, it is a scale in which the curve of the earth is not negligible; the large-scale atmospheric flows are essentially nearly hydrostatic, nearly geostrophic and wave-like in appearance; they exist mainly in response to the latitudinal differences in radiative heating, to the particular value of the coriolis force and to the spatial distribution of the oceans and continents.
latent heat of fusion
the amount of heat required to cause a change of phase from solid to liquid, or the heat released when the phase change is from liquid to solid; in the case of melting snow, the phase change from ice to water requires a significant amount of heat160 times that required to raise the temperature of the same amount of ice by just 1 degree Celsius; until the required amount of heat is supplied to completely melt all of the ice being considered, no further increase in temperature will occur.
latent heat polynya
a polynya that forms from strong winds in a persistent direction that push the ice away from a barrier (the coast, fast ice, a grounded iceberg, or an ice shelf).
lateral moraine
a ridge-shaped moraine deposited at the side of a glacier and composed of material eroded from the valley walls by the moving glacier.
lateral talik
a layer or body of unfrozen ground, overlain and underlain by perennially frozen ground.
latitudinal limit of permafrost
the southernmost (northernmost) latitude at which permafrost occurs in a lowland region in the northern (southern) hemisphere.
latitudinal zonation of permafrost
the subdivision of a permafrost region into permafrost zones, based on the percentage of the area that is underlain by permafrost.
layered cryostructure
the cryostructure of frozen silt or loam in which ice layers alternate with mineral layers that have a massive cryostructure.
lead
long, linear areas of open water that range from a few meters to over a kilometer in width, and tens of kilometers long; they develop as ice diverges, or pulls apart.
Image 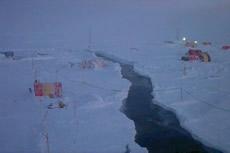 Lead that developed through the middle of an Arctic camp site.