All
A B C D E F G H I J K L M N O P R S T U V W Y Z
ice
the solid crystalline form of water.
ice apron
a mass of ice adhering to a mountainside.
ice area
the region covered by sea ice, typically given in square kilometers. For a grid cell, it is the area of the portion of the cell covered by ice. For an entire hemisphere, it is the total area covered by ice, which corresponds to sum of the area of each cell multiplied by the fractional concentration for that cell.
ice blink
white glare on the underside of low clouds indicating presence of ice which may be beyond the range of vision.
ice cake
a floe smaller than 20 meters (66 feet) across.
ice canopy
pack ice from the point of view of the submariner.
ice cap
a dome-shaped mass of glacier ice that spreads out in all directions; an ice cap is usually larger than an icefield but less than 50,000 square-kilometers (12 million acres).
Image 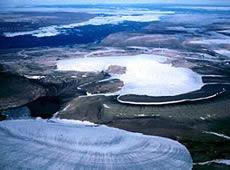 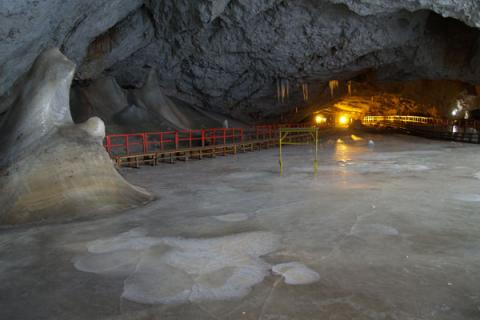 This photograph shows a 22-meter thick ice block along with ice stalactites and stalagmites in the Great Hall of Scarisoara Ice Cave, Romania.

Aurel Persoiu
ice cluster
a concentration of sea ice, covering 100's of square kilometers, which is found in the same region every summer.
ice concentration
the fraction of an area that is covered by sea ice. Ice concentration typically is reported as a percentage (0 to 100 percent ice), a fraction from 0 to 1, or sometimes in tenths (0/10 to 10/10).
ice content
the amount of ice contained in frozen or partially frozen soil or rock.
ice core
a core sample drilled from the accumulation of snow and ice over many years that have recrystallized and have trapped air bubbles from previous time periods, the composition of which can be used to reconstruct past climates and climate change; typically removed from an ice sheet (Antarctica and Greenland) or from high mountain glaciers elsewhere.
ice covered
land overlaid at present by a glacier is said to be covered; the alternative term glacierized has not found general favour.
ice divide
the boundary separating opposing flow directions of ice on a glacier or ice sheet.
ice edge
the boundary at any given time between open water and sea, river or lake ice of any kind, whether drifting or fast; may be termed compacted when it is clear-cut, or open when it forms the indefinite edge of an area of dispersed ice.
Image 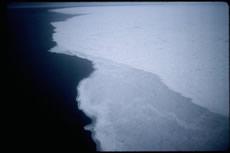 Todd Arbetter, National Snow and Ice Data Center
ice extent
the total area covered by some amount of ice, including open water between ice floes; ice extent is typically reported in square kilometers. Extent defines a region as either "ice-covered" or "not ice-covered." A threshold determines this labeling. A typical threshold is 15 percent, meaning that if the data cell has greater than 15 percent ice concentration, the cell is labeled as "ice-covered." Sea Ice Index products have a threshold of 15 percent. A threshold can also be as high as 30 percent.
ice floe
a cohesive sheet of ice floating in the water; the sea ice cover is made up of conglomerates of floes; ice floes are not unique to sea ice, as they also occur in rivers and lakes.
Image

ice fog
a suspension of numerous minute ice crystals in the air, reducing visibility at the earth's surface; the crystals often glitter in the sunshine; ice fog produces optical phenomena such as luminous pillars and small haloes.
ice fringe
a very narrow ice piedmont, extending less than about 1 km inland from the sea.
ice front
the vertical cliff forming the seaward face of an ice shelf or other floating glacier, varying in height from 2 to 50 meters (2.2 to 55 yards) above sea level.