All
A B C D E F G H I J K L M N O P R S T U V W Y Z
pack ice
ice that is not attached to the shoreline and drifts in response to winds, currents, and other forces; some prefer the generic term drift ice, and reserve pack ice to mean drift ice that is closely packed.
palsa
a peaty permafrost mound possessing a core of alternating layers of segregated ice and peat or mineral soil material.
palsa bog
a poorly-drained lowland underlain by organic-rich sediments, which contains perennially frozen peat bodies (peat plateaux) and, occasionally, palsas.
pancake ice
pieces of new ice approximately circular, up to 10 centimeters (4 inches) thick and 0.03 to 3 meters (0.1 to 9.8 feet) in diameter, with raised edges that form from rubbing against each other; formed from the freezing together of grease ice, slush or shuga, or the reaking up of ice rind or nilas.
Image 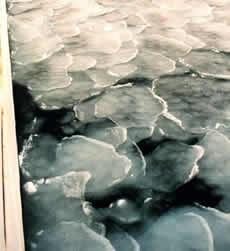 National Oceanic and Atmospheric Administration/Department of Commerce
parameter
(1) a term used loosely by many meteorologists for almost any meteorological quantity or element (2) an arbitrary constant or variable appearing in a mathematical expression; changing it can give various outcomes for the phenomena represented.
partial pressure
in a mixture of gases, each gas has a partial pressure, which is the pressure the gas would have if it occupied that volume alone.
partially-bonded permafrost
ice-bearing permafrost in which some of the soil particles are not held together by ice.
passive construction methods in permafrost
special design and construction methods used for engineering works in permafrost areas where preservation of the frozen condition is feasible.
passive single-phase thermal pile
a foundation pile provided with a single-phase natural convection cooling system to remove heat from the ground.
passive two-phase thermal pile
a foundation pile provided with a two-phase natural convection cooling system to remove heat from the ground.
past weather
predominant characteristic of the weather which had existed at an observing station during a given period of time (during the preceding hour or six hours), specified in the international synop code.
patch
a collection of pack ice, less than 10 kilometers (6.2 miles) across, whose limits can be seen from the masthead.
patterned ground
a general term for any ground surface exhibiting a discernibly ordered, more or less symmetrical, morphological pattern of ground and, where present, vegetation.
Image 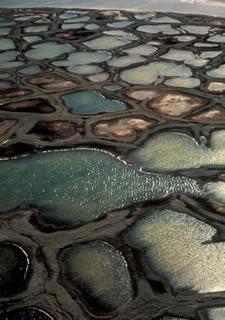 U.S. Fish and Wildlife Service
peat
a deposit consisting of decayed or partially decayed humified plant remains.
peat hummock
a hummock consisting of peat.
peat plateau
a generally flat-topped expanse of peat, elevated above the general surface of a peatland, and containing segregated ice that may or may not extend downward into the underlying mineral soil.
peatland
peat-covered terrain.
penitents
the extreme relief of ablation hollows found most often at high altitudes in the tropics; the resulting spikes of snow resemble repentant souls.
pereletok
a layer of frozen ground which forms as part of the seasonally frozen ground (in areas free of permafrost or with a lowered permafrost table); remains frozen throughout one or several summers, and then thaws.
perennial snow
snow that persists on the ground year after year.