All
A B C D E F G H I J K L M N O P R S T U V W Y Z
gas hydrate
a special form of solid clathrate compound in which crystal lattice cages or chambers, consisting of host molecules, enclose guest molecules.
gauge
in meteorology, general term for any device that measures strength of wind, pressure, and other parameters; the most widespread gauges on meteorology are balance snow gauge, barometer gauge, density-of-snow gauge, dew gauge, distance gauge, rain-and snow gauge, rain-intensity gauge, standard gauge, wind gauge, etc..
gelifluction
the slow downslope flow of unfrozen earth materials on a frozen substrate.
general circulation
of the atmosphere; complete statistical description of atmospheric motions over the earth.
general circulation model
numerical representation of the atmosphere and its phenomena over the entire earth, using the equations of motion and including radiation, photochemistry, and the transfer of heat, water vapor, and momentum.
geocryology
the study of earth materials having a temperature below 0 degrees Celsius.
geomagnetic pole
the point of intersection of the Earth's surface with the axis of a simple magnetic dipole that best approximates the Earth's actual, more complex magnetic field; if the Earth's magnetic field were a perfect dipole then the field lines would be vertical at the geomagnetic poles, and they would therefore coincide with the magnetic poles: however, the dipole approximation is in fact far from perfect, so in reality the magnetic and geomagnetic poles lie some distance apart.
geostrophic wind
theoretical wind which results from the equilibrium between horizontal components of the pressure gradient force and the coriolis force (deviating force) above the friction layer; only these two forces (no frictional force) are supposed to act on the moving air; it blows parallel to straight isobars or contours.
geothermal gradient
the rate of temperature increase with depth in the subsurface.
geothermal heat flux
the amount of heat moving steadily outward from the interior of the earth through a unit area in unit time.
geyser
fountain that develops when water from a conduit is forced up to the surface of a glacier; also called a negative mill.
glacial advance
when a mountain glacier's terminus extends farther downvalley than before; occurs when a glacier flows downvalley faster than the rate of ablation at its terminus.
glacial erratic
a boulder swept from its place of origin by glacier advance or retreat and deposited elsewhere as the glacier melted; after glacial melt, the boulder might be stranded in a field or forest where no other rocks of its type or size exist.
Image

Erratic boulder, northeastern Manitoba, Canada. A sense of the size of the glacial erratic can be estimated by noting the person standing in front of the boulder, on the left side. This erratic, as well as neighboring ones, were carried by the Keewatian Ice Sheet. 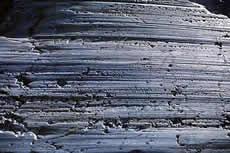 Striated Graywackie, Yale Glacier, Alaska. 1997. Parallel striations and bedrock fracture trends (across the left side of the image) are clearly visible in this photo.

Tom Lowell, University of Cincinnati
glacial retreat
when the position of a mountain glacier's terminus is farther upvalley than before; occurs when a glacier ablates more material at its terminus than it transports into that region.
Image

Striated Graywackie, Yale Glacier, Alaska. 1997. Parallel striations and bedrock fracture trends (across the left side of the image) are clearly visible in this photo.

Tom Lowell, University of Cincinnati
glacial till
accumulations of unsorted, unstratified mixtures of clay, silt, sand, gravel, and boulders; the usual composition of a moraine.
glacial trough
a large u-shaped valley formed from a v-shaped valley by glacial erosion.
Image 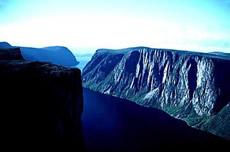 Western Brook glacial trough, Newfoundland, Canada. The sheer walls of this glacial trough soar up to 700 m high, and the glacial basin is 500 m deep in places.

Natural Resources Canada, copyright Terrain Sciences Division, Geological Survey of Canada
glaciated
land covered in the past by any form of glacier is said to be glaciated.
glacier
a mass of ice that originates on land, usually having an area larger than one tenth of a square kilometer; many believe that a glacier must show some type of movement; others believe that a glacier can show evidence of past or present movement.
Image

Taku Glacier winds through the mountains of southeastern Alaska, calving small icebergs into Taku Inlet. This photograph dates from 1929.

U. S. Navy, archived at the World Data Center for Glaciology, Boulder, CO