All
A B C D E F G H I J K L M N O P R S T U V W Y Z
band ogives
alternate bands of light and dark on a glacier; usually found below steep narrow icefalls and thought to be the result of different flow and ablation rates between summer and winter.
banded cryogenic fabric
a distinct soil micromorphology, resulting from the effects of freezing and thawing processes, in which soil particles form subhorizontal layers.
barograph
a barometer that records barometric pressure over time (days or weeks).
barometer
an instrument for measuring atmospheric pressure; two types of barometers are commonly used in meteorology: the mercury barometer and the aneroid barometer.
barrens
areas of discontinuous vegetation cover in the polar semi-desert of the high arctic.
basal cryopeg
a layer of unfrozen ground that is perennially cryotic (t < 0 degrees Celsius), forming the basal portion of the permafrost.
basal cryostructure
the cryostructure of a frozen deposit of boulders that is saturated with ice.
basal sliding
the sliding of a glacier over bedrock.
basal-layered cryostructure
the cryostructure of a frozen layered deposit of gravel and boulders that is saturated with ice.
beaded stream
a stream characterized by narrow reaches linking pools or small lakes.
Beaufort Gyre
an ocean and ice circulation pattern in the Beaufort Sea, north of Alaska. This gyre moves in a clockwise direction, fed by an average high-pressure system that fosters anti-cyclonic winds. Ice that forms in or drifts into the Beaufort Gyre has historically remained in the Arctic ice system for years, accumulating snow and thickening each winter. Beginning in the late 1990s, the ice began melting away while in the southern parts of the gyre, before completing the circulation.
bedrock
hard-packed rock lying below the Earths surface; lies in beds or layers; can be variable across geographic space; above bedrock is a layer of broken, weathered rock.
belt
a long area of pack ice from a few km to more than 100 kilometers in width.
bergschrund
crevasse that separates flowing ice from stagnant ice at the head of a glacier.
Image 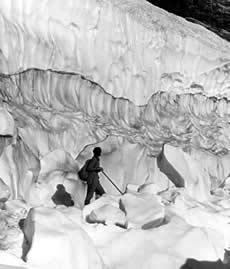 Explorer on Skillet Glacier in 1936. Bergschrund is visible as the dark band of ice in the background.

bergy bit
large chunk of glacier ice (a very small iceberg) floating in the sea; bergy bits are usually less than 5 meters (15 feet) in size and are generally spawned from disintegrating icebergs.
Bermuda high
the semipermanent subtropical high over the North Atlantic Ocean, especially when it is located over the western part of the ocean; the same high over the eastern part of the Atlantic is called the Azores high; on mean charts of sea level pressure, this high is one of the primary centers of action in northern latitudes.
beset
situation of a vessel surrounded by ice and unable to move.
bight
an extensive crescent-shaped indentation in the ice edge, formed either by wind or current.
blind lead
a lead closed off on all sides within the ice pack.
blizzard
winds of at least 35 miles per hour along with considerable falling and/or blowing snow reducing visibility to less than one-quarter mile for a period of at least three hours (extremely cold temperatures are often associated with dangerous blizzard conditions, but are not a formal part of the modern definition).