All
A B C D E F G H I J K L M N O P R S T U V W Y Z
hail
precipitation of small balls or pieces of ice (hailstones) with a diameter ranging from 5 to 50 millimeters (0.2 to 2.0 inches), or sometimes bigger, falling either separately or agglomerated into irregular lumps; when the diameter is less than about 5 millimeters (0.2 inch), the balls are called ice pellets.
halo
group of optical phenomena, in the form of rings, arcs, pillars or bright spots around the sun or moon, produced by the refraction or reflection of light by ice crystals suspended in the atmosphere (cirrus clouds, diamond dust, etc.).
hanging glacier
a glacier that terminates at or near the top of a cliff.
Image

hanging valley
a valley formed by a small glacier that has a valley bottom relatively higher than nearby valleys formed by larger glaciers.
hard frozen ground
frozen ground (soil or rock) which is firmly cemented by ice.
haze
fine dust or salt particles dispersed through a portion of the atmosphere; the particles are so small that they cannot be felt or individually seen with the naked eye, but they diminish horizontal visibility and give the atmosphere a characteristic opalescent appearance that subdues all colors; a type of lithometeor.
headwall
a steep cliff, usually the uppermost part of a cirque.
heat balance
equilibrium between the gain and loss of heat at a specific place or for a specific system.
heat balance of the earth-atmosphere system
the equilibrium that exists between the radiation received by the earth and atmosphere from the sun and that emitted by the earth and atmosphere.
heat budget
relation between fluxes of heat into and out of a given region or body and the heat stored by the system; in general, this budget includes advective, evaporative, and other terms as well as a radiation term.
heat capacity
the amount of heat required to raise the temperature of a unit mass of a substance by one degree.
heat flux
the amount of heat transferred across a surface of unit area in a unit time.
heat sink
process, or region, in which energy is removed from the atmosphere in the form of heat.
heat source
process, or region, in which energy is added to the atmosphere in the form of heat.
heaving pressure
upward pressure developed during freezing of the ground.
high
area of high pressure in the atmosphere; used interchangeably with anticyclone.
high-center polygon
an ice-wedge polygon in which melting of the surrounding ice wedges has left the central area in a relatively elevated position.
high-level clouds
typically thin, white clouds above 6,000 meters (20,000 feet); at these altitudes, temperatures are so cold that clouds are composed primarily of ice crystals; includes cirrus, cirrocumulus and cirrostratus clouds.
hoarfrost
a deposit of interlocking ice crystals (hoar crystals) formed by direct sublimation on objects, usually those of small diameter freely exposed to the air, such as tree branches, plant stems and leaf edges, wires, poles, etc.; the surfaces of these objects are sufficiently cooled, mostly by nocturnal radiation, to cause the direct sublimation of the water vapor contained in the ambient air.
horn
a peak or pinnacle thinned and eroded by three or more glacial cirques.
Image 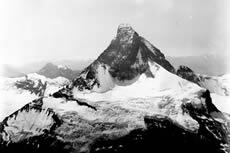 The Matterhorn in Switzerland was carved away by glacial erosion.