The Ice, Cloud, and land Elevation Satellite-2
In this section

The NSIDC DAAC ICESat-2 data collection includes data products derived from the Advanced Topographic Laser Altimeter System (ATLAS) instrument aboard the Ice, Cloud and land Elevation Satellite-2 (ICESat-2). ATLAS has a single laser split into six beams and arranged in three pairs to better gauge the slope of Earth's surface. The device measures heights across Earth's surface by comparing the time it takes for a laser pulse to echo from the ground back to the receiver as it orbits the Earth. It is exceptionally fast, shooting out 10,000 laser pulses per second compared with only 40 pulses per second from its predecessor, the Geoscience Laser Altimeter System (GLAS), and taking measurements every 28 inches as it propels forward through space. ICESat-2 data products at the NSIDC DAAC describe elevations of sea ice, land ice, forest canopies, water height, urban areas, and more. Data observations span from late 2018 to present.

ICESat-2 is the third in a series of NASA missions designed to provide continuous polar observations over time. Previous missions include the ICESat/GLAS mission, which collected satellite observations from 2003 to early 2010, followed by Operation IceBridge. The Operation IceBridge mission included more than 1,000 aircraft surveys from 2009 to 2019 and primarily served to bridge the gap between ICESat/GLAS and ICESat-2 and validate ICESat-2 measurements. The NSIDC DAAC provides data from all three missions.

When combined with data from the ICESat/GLAS and Operation IceBridge data collections, ICESat-2 data enable researchers to investigate and better understand changes occurring to the cryosphere over time. They can also use these data to monitor changes in sea ice thickness over time, to detect icebergs and forecast where they will travel, and to better predict how Earth’s melting glaciers will impact global sea rise in the future. Using data collected from ATLAS, researchers can estimate the annual height changes of the Greenland and Antarctic ice sheets to within four millimeters (about one-sixth of an inch). For a sampling of ICESat-2 observations, visit NASA’s Scientific Visualization Studio ICESat-2 gallery.

In addition to cryospheric data, ATLAS also measures the height of ocean and land surfaces, including forests, snow, lakes, rivers, ocean waves, and urban areas. These additional measurements are useful in a variety of scientific disciplines and for real-world applications. For example, researchers can use forest data to estimate the amount of carbon stored in the world’s forests and to improve wildfire behavior forecasts. They can use snow and river height data to better plan for floods and droughts. And they can use elevation data around volcanoes to more accurately predict volcanic eruptions.

The NSIDC DAAC distributes Level-1, Level-2, Level-3A, and Level-3B ICESat-2/ATLAS products, which range in temporal coverage from October 2018 to present. The nominal ICESat-2 mission is three years in length, but is expected to continue collecting data for several years beyond that target. 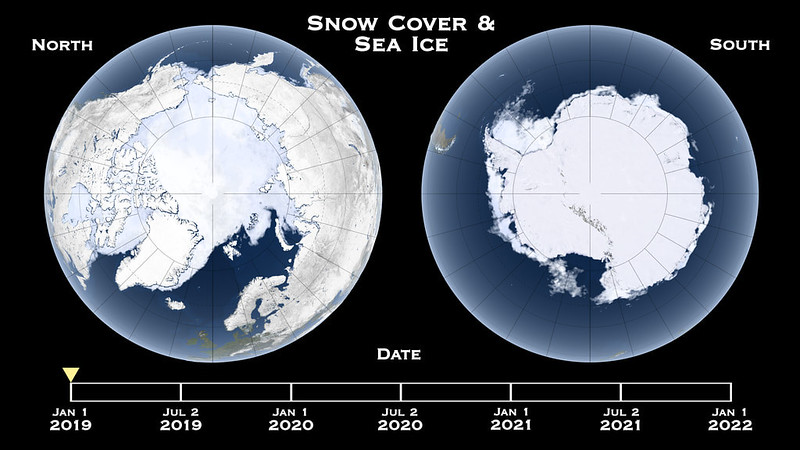