The NOAA@NSIDC Environmental Working Group (EWG) Atlases data collection comes from a cooperative effort between the United States and Russia in the 1990s. The collection is composed of observations of the Arctic from the 1950s through the mid-1990s. The atlases  include Russian and Western perspectives on the Arctic climate system, including atmospheric, oceanographic, and cryospheric data, maps, histories, and facts about climate and weather. The EWG Atlases cover three broad areas:

The EWG Atlas on the Arctic Ocean (versions for both winter and summer) was compiled from over a million individual observations collected from Russian drifting stations, icebreakers, and airborne surveys. Release of the EWG Atlas on sea ice was compiled from, among other measurements, decades of sea ice observations from submarines, where knowledge of sea ice location and thickness would provide tactical advantages. Russian and US observations from 1950 to 1994 were incorporated into this atlas. The EWG Atlas of Arctic weather and climate incorporates US and Russian perspectives, as well as Inuit knowledge.

By providing snapshots of conditions recorded during the Cold War, the EWG Atlases document how conditions changed over the second half of the twentieth century, and provide comparison data for more recent observations. Originally released on CD-ROM from 1997 to 2001, the atlases are now available via FTP download. Once downloaded, the atlases can be browsed with any web browser.

Why the EWG Atlases matter

Although it has one of the most hostile climates on the planet, the Arctic has long been a region rich with human activity. In addition to being the home of Indigenous Peoples for millennia, the Arctic has been traversed for exploration, commerce, and intelligence gathering by rising and falling superpowers for centuries. With increasing success in the twentieth century, seafarers have traveled through the Northwest Passage and the Northern Sea Route. The Arctic Ocean has also provided the shortest maritime link between extreme western and eastern Russia.

The EWG Atlases resulted from an unprecedented exercise in cooperation between world superpowers. During the Cold War of the twentieth century, the United States and Russia gathered intelligence on the Arctic Ocean in anticipation that the region could become a staging ground for military conflict. In the 1930s, Russia (part of the Soviet Union at that time) began focusing intense scrutiny on the Arctic Ocean. The Soviets established their first sea ice drifting station in the Arctic in 1937, and shut down their thirty-seventh drifting station in 1991. Throughout the Cold War, both the United States and Russia studied the Arctic through airborne surveys, satellites, icebreakers, buoys, and submarines.

Tensions between the United States and Russia began to ease in the early 1990s. Prompted by Tennessee senator and soon-to-be US Vice President Al Gore, the United States and Russia recognized the scientific value locked within the vast archive of classified Arctic observations. The two nations agreed to declassify and share their scientific data. Under the direction of Presidents Bill Clinton and Boris Yeltsin, Gore and his Russian counterpart, Prime Minister Viktor Chernomyrdin, led months-long negotiations to release and share data that had previously been gathered covertly.

Scientifically, the ocean data are unique in that they give a three-dimensional picture of salinity and temperature arrived at by model assimilation of data from US and Russian navies and other sources. Much of the data on the sea ice and meteorology atlases were not publicly available prior to the publication of the Atlases. In particular, the atlas of the Arctic Ocean (versions for both winter and summer) more than doubled the scientific oceanographic observations of the Arctic available to scientists at that time.

You can learn more about the history of research and collaboration in the National Geographic article An Arctic breakthrough. You can learn more about the efforts to declassify data and the US Central Intelligence Agency in The New York Times article Inside the CIA, she became a spy for Planet Earth. A login or subscription may be required for access to each publication.

Learn about Arctic weather and climate

Explore images from the project 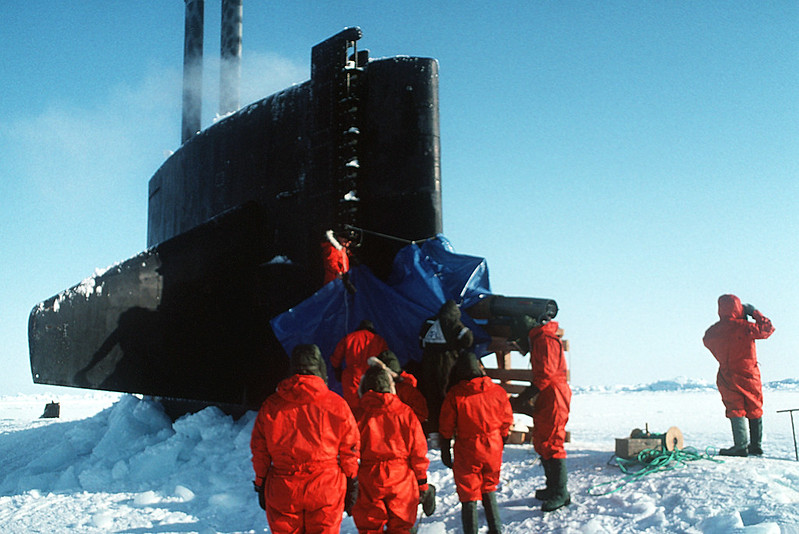