Sea ice extent near both poles was again below average, but higher than in recent years for most of the month. In the Arctic, seasonal sea ice loss began more slowly in May than in the recent years as air temperatures were closer to the 1981 to 2010 average. In the Antarctic, a slowdown in ice growth late in the month quickly brought sea ice extent levels close to record lows. 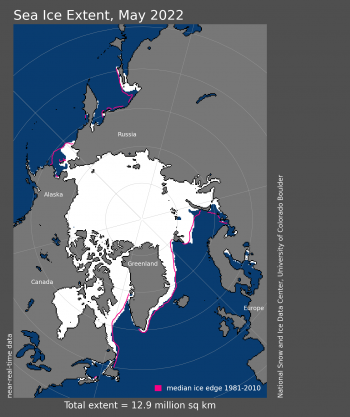 Average Arctic sea ice extent for May 2022 was 12.88 million square kilometers (4.97 million square miles) (Figure 1). This was 410,000 square kilometers (158,000 square miles) below the 1981 to 2010 average, yet it was the highest May extent since 2013. As was the case for April, sea ice extent was slow to decline, losing only 1.28 million square kilometers (494,000 square miles) during the month. Ice loss in May occurred primarily in the Bering Sea, the Barents Sea, and within Baffin Bay and Davis Strait. However, several openings, or polynyas, in the pack ice have started to form, particularly within the eastern Beaufort Sea, the Chukchi Sea, the Laptev Sea, and around Franz Joseph Land in the northern Barents Sea. Ice also started to pull back from the shores of Russia in the Kara Sea. In Hudson Bay, the ice started to melt out in the south within James Bay and off of Southampton Island in the north. Overall, the daily sea ice extent tracked within the interdecile range (encompassing 90 percent of the 1981 to 2010 daily values) for much of the month. By the end of the month, extent was close to the sea ice extent observed in late May 2012. 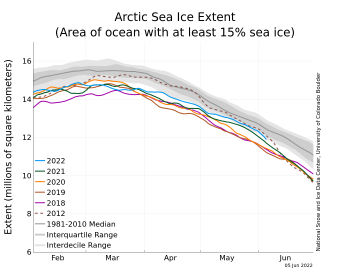 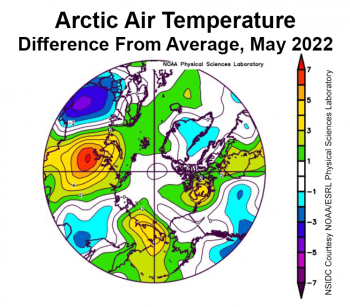 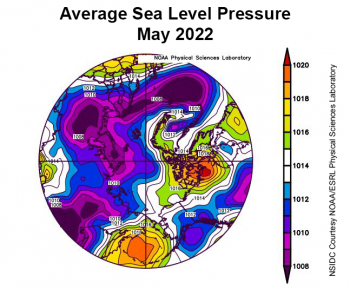 Through May, sea ice extent was tracking above levels not seen since 2013. The relatively extensive ice cover for this time of year was largely the result of lower than average temperatures in Baffin Bay. Winds from the north also slowed the retreat of ice in the Bering and Barents Seas. Within the Arctic Ocean, air temperatures at the 925 mb level (about 2,500 feet above the surface) were near average over most of the region in May, and 1 to 5 degrees Celsius (2 to 9 degrees Fahrenheit) above the 1981 to 2010 average along the coast of the Kara and East Siberian Seas, the East Greenland Sea, and the Canadian Archipelago (Figure 2b). Areas where openings formed within the ice cover were dominated by off-shore ice motion, pushing ice poleward as well as toward Fram Strait. This offshore ice motion is largely driven by a pattern of low sea level pressure over Eurasia coupled with high pressure over the Pacific sector of the Arctic (Figure 2c).

May 2022 compared to previous years 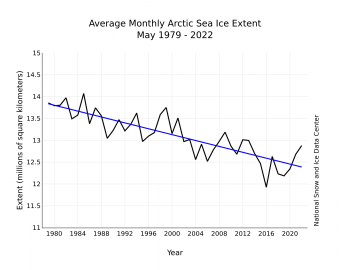 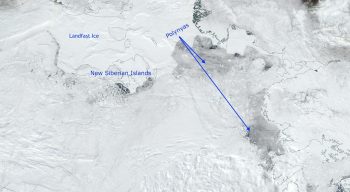 Figure 4a. This NASA Worldview image from NASA’s Moderate Resolution Imaging Spectroradiometer (MODIS) on May 29, 2022 shows polynyas forming off the coast of Siberia. 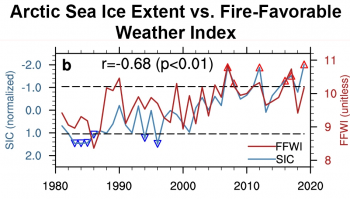 Figure 4b. This plot shows the relationship between averaged sea ice extent from July through October (in blue) and the regional average fire-favorable weather index (FFWI) over the western United States the following autumn and early winter (September to December, in red).

Polynyas have begun to form, providing open water regions that strongly absorb the sun’s energy, warming the near-surface ocean mixed layer, and enhancing lateral ice melt from the sides. One of the larger polynyas is in the Laptev Sea to the west of the New Siberian Islands (Figure 4a). Despite the thin cloud cover, polynyas can be seen at the edge of the landfast ice, ice fastened to the coastline, to the west of the New Siberian Islands as well off the coast of the Taymyr Peninsula between the Kara and Laptev Seas.

A consequence of summer sea ice loss is that the ocean absorbs more of the sun’s energy. Before the ice can form again in the fall and winter, this heat has to be released back to the atmosphere. This is one of the reasons why the Arctic is warming more strongly than the global average, particularly in the fall season. Studies have suggested this amplified Arctic warming may be impacting weather systems at lower latitudes. One hypothesis is that the warm air released from the surface propagates up through the atmosphere and disrupts the polar vortex in the stratosphere. This can lead to cold air outbreaks, such as in February 2021 when cold Arctic air reached as far south as Texas, causing the failure of the power grid, billions of dollars in damage, and loss of lives. Proposed links between Arctic warming and mid-latitude weather nevertheless remain controversial and are far from settled.

Another recent study reveals a correlation between Arctic sea ice extent (averaged from July to October) and conditions favoring California wildfires after removing the long-term trend in both the sea ice and a regional fire-favorable weather conditions index. However, correlation is not causation. This study addresses the potential physical link by examining sensitivity simulations using low and high sea ice years and comparing the atmospheric conditions from climate model runs. The results suggest that during low sea ice minimum years there is tendency for low sea level air pressure over Alaska and high sea level pressure over the western United States. This results in dry and hot air flowing from the south and southwest over California, conditions favorable for wildfires there in the following autumn and early winter (Figure 4b). 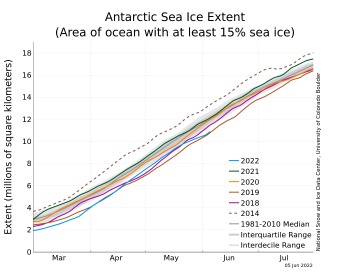 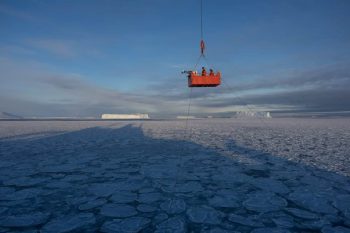 As reported in a previous post, this year, Antarctic sea ice shrank to the lowest extent in the satellite record at 1.92 million square kilometers (741,000 square miles) on February 25. This event was set against the background of several low minimum extents since 2014. During the month of May, sea ice tracked slightly below the 1981 to 2010 reference period, until late in the month when sea ice autumn growth slowed significantly (Figure 5a). Stronger than average winds from the north and northeast in the Belligshausen and Amundsen Sea regions led to warm conditions near the sea ice edge, inhibiting growth. At month’s end, Antarctic sea ice extent was above only 1980, 1986, 2017, and 2019 in the 44-year record. Sea ice is particularly low in the Amundsen and Weddell Seas.

A United Kingdom-led project, called Drivers and Effects of Fluctuations in sea Ice in the ANTarctic (DEFIANT), aims to address this problem. The DEFIANT team is particularly interested in learning how radar waves interact with the snow that covers Antarctic sea ice. A recent DEFIANT field campaign involved three scientists travelling to the Weddell Sea with a radar designed to mimic those mounted on satellites. They investigated radar penetration into snow of different ages, densities, and surface roughness (Figure 5b). The results will help the research community better understand how to measure the underlying sea ice thickness using satellites. In 2023, two DEFIANT-affiliated scientists will spend the entire winter in Antarctica with the same radar instrument, monitoring the snow cover and its radar-reflective properties.