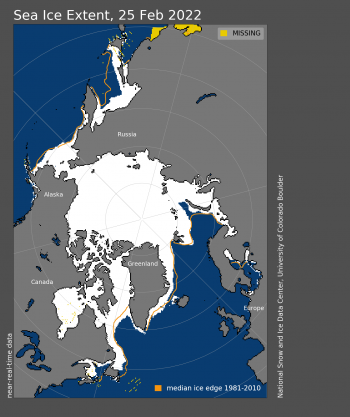 The date of the maximum this year, February 25, was fifteen days earlier than the 1981 to 2010 average date of March 12. Only two years had an earlier maximum, 1987 and 1996, both on February 24. This year is the second earliest date on the satellite record, tying with 2015, which also reached its maximum extent on February 25. 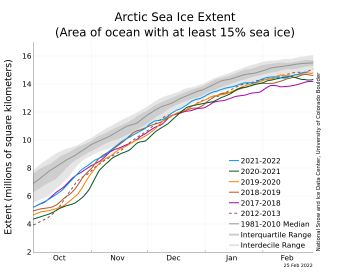 The ice growth season ended with near average sea ice extent in the Bering Sea, above average in Baffin Bay and off the coast of south-eastern Greenland, and below average in the Barents Sea with a narrow open-water wedge north of Novaya Zemlya. Extent was well below average in the Gulf of St. Lawrence and the Sea of Okhotsk.

Since the maximum on February 25, extent has dropped about 390,000 square kilometers (151,000 square miles), with losses primarily in the Sea of Okhotsk and the Barents Sea. These losses have been offset by gains in the Bering Sea, Baffin Bay, and the Labrador Sea. 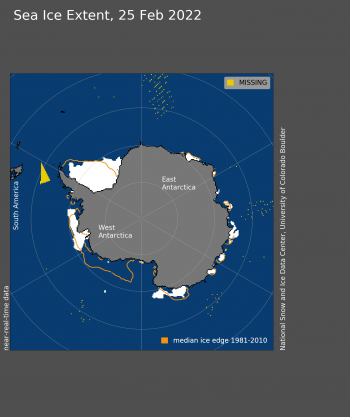 The February 25 timing of the minimum was only a day later than the 1981 to 2010 median date of February 24 for the minimum. Over the satellite record, the Antarctic minimum has occurred as early as February 15 and as late as March 6.

Average austral summer air temperatures at the 925 mb level (about 2,500 feet above sea level) over Antarctic sea ice regions have been near average. However, winds have been much stronger and generally in a more northward direction, helping to break up the ice and melt it in warmer ocean waters. One exception was the Weddell Sea, where winds came more from the north, but that served to push the ice edge southward, reducing extent near the Antarctic Peninsula.

Since the minimum on February 25, ice growth has progressed at a near-average rate with growth around most of the continent, except off the coast of Dronning Maud Land and Enderby Land, which lie to the south of Africa.