Sea ice extent increased at a faster than average pace through November and by the end of the month, extent was just within the interdecile range. Extent was above average in the Bering Sea, but Hudson Bay remained unusually ice free through the month. 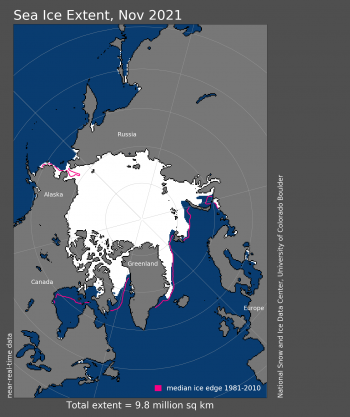 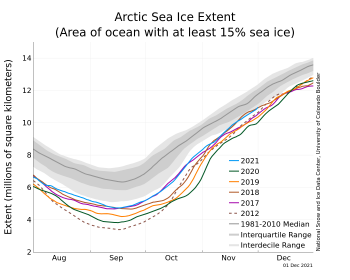 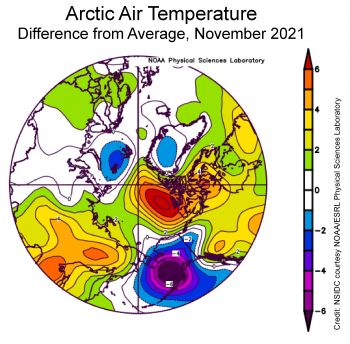 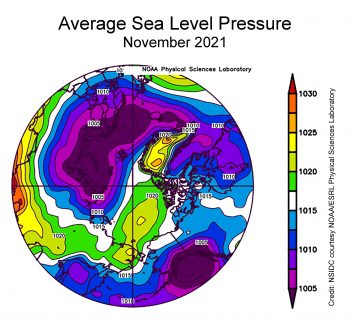 The sea level pressure pattern for November featured widespread low pressure over the Atlantic side of the Arctic and extending into the Barents and Kara Seas, paired with a moderately strong Beaufort Sea High (Figure 2c). Strong low pressure over the Gulf of Alaska resulted in a circulation pattern in the eastern Bering Sea that brought cold air from the north. This pattern was favorable for sea ice growth, and can explain the above average ice extent in the region. 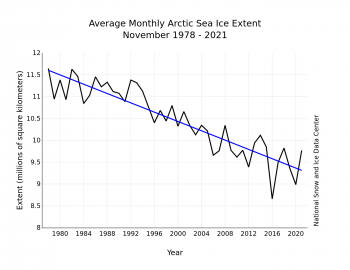 The downward linear trend in November sea ice extent over the 43-year satellite record is 53,300 square kilometers (20,600 square miles) per year, or 5 percent per decade relative to the 1981 to 2010 average. Also based on the linear trend, since 1979, November has lost 2.2 million square kilometers (849,000 square miles). This is equivalent to about three times the size of Texas.

No freeze in Hudson Bay 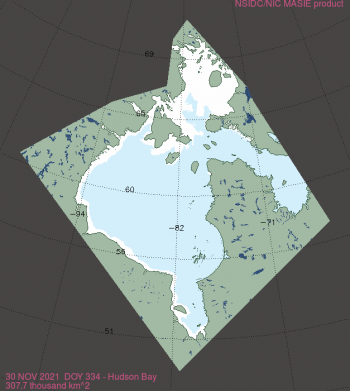 Typically, Hudson Bay begins freezing up by the beginning of November. By the end of the month, the northern half of the bay is usually completely iced over. However, as of the end of November 2021, only the far north has frozen over; the rest of the bay is ice free except for a narrow band of ice along the western coastline. According to the NSIDC Sea Ice Index, this is the second lowest extent in Hudson Bay at this time, above only 2010.

The USNIC/NSIDC Multisensor Analyzed Sea Ice Extent (MASIE) product provides a more detailed view (Figure 4). It also shows ice only in the far north of the region and along the western coast. The lack of ice has potential ramifications for polar bears in the region that must wait for the bay to freeze over to hunt. While the lack of ice in Hudson Bay at this time of year is extreme, the bay will eventually freeze over through the coming winter.

Frozen in the Northern Sea Route 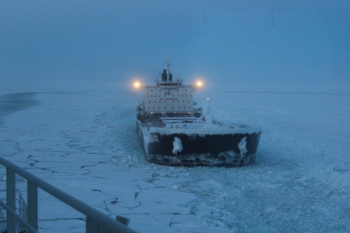 An early freeze of sea-ice has led to logistical chaos on the Northern Sea Route.

The story on the opposite side of the Arctic stands in sharp contrast to Hudson Bay. Ice formed along the eastern part of the Siberian coast relatively early, at least compared to recent years. This caught ships transiting through the Northern Sea Route by surprise. Several have become frozen in and are awaiting icebreakers to free them. In addition to the surprisingly early freeze up, winds also pushed ice together into ridges (piled up ice) that are much more difficult to navigate through. Supplies to northern Siberian cities have been delayed.

Springtime in the South 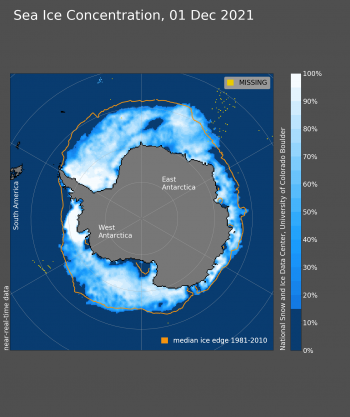 In the Antarctic, ice extent declined relatively rapidly during the austral spring. By the end of November, extent was the second lowest in the satellite record, bested only by the extreme low recorded in 2016. Extent was particularly low in the Bellingshausen and Weddell Seas as well as in the Indian Ocean sector, north of Enderby Land. The Maud Rise polynya has once again formed. This feature was not seen for many years after the 1970s, but has started to form in recent years.

ASINA team member Ted Scambos is currently on his way to Antarctica for field work.