On September 16, Arctic sea ice likely reached its annual minimum extent of 4.72 million square kilometers (1.82 million square miles). The 2021 minimum is the twelfth lowest in the nearly 43-year satellite record. The last 15 years are the lowest 15 sea ice extents in the satellite record. The amount of multi-year ice (ice that has survived at least one summer melt season), is one of the lowest levels in the ice age record, which began in 1984. 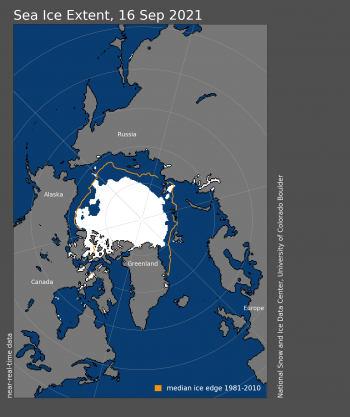 On September 16, sea ice reached its annual minimum extent of 4.72 million square kilometers (1.82 million square miles) (Figure 1). In response to the setting sun and falling temperatures, ice extent has begun rising and will continue to rise through autumn and winter. However, a shift in wind patterns or a period of late season melt could still push the ice extent lower. 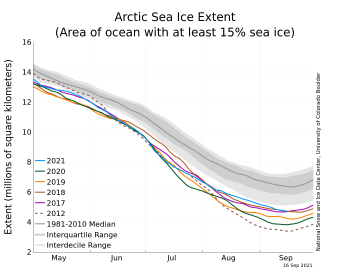 In the 43-year-satellite record, 15 of the lowest minimums have all occurred in the last 15 years.

The overall, downward trend in the minimum extent from 1979 to 2021 is 13.0 percent per decade relative to the 1981 to 2010 average. The loss of sea ice is about 80,600 square kilometers (31,100 square miles) per year, equivalent to losing the size of the state of South Carolina or the country of Austria annually.