At mid-month, Arctic sea ice extent is tracking close to 2012, the year with the lowest minimum in the satellite record. Sea ice volume is also tracking at low levels. Smoke from Siberian wildfires continues to cover much of the Pacific side of the Arctic Ocean, but as solar input declines this late in the melt season, it is unlikely to impact sea ice loss. 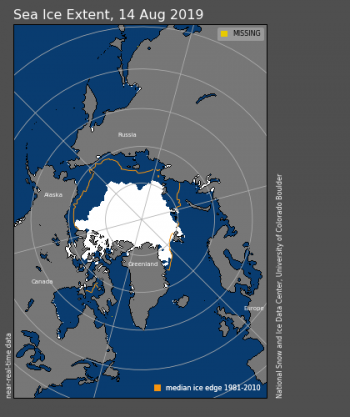 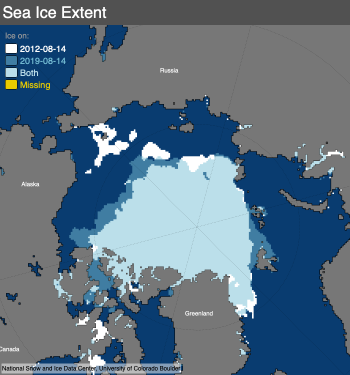 Sea ice retreat in the first half of August 2019 was mainly in an area of patchy sea ice in the East Siberian Sea and along the ice edge in the northern Beaufort and Chukchi Seas. The Northern Sea Route appears to be open in our satellite-based mapping, but ice may remain in some areas. The Northwest Passage is still closed. There was little change in the ice edge in the Svalbard region and northern Barents and Laptev Seas. However, areas of low sea ice concentration are present along much of the remaining ice edge.

A comparison of 2019 and 2012 ice extent for August 14 shows remarkable similarities. In 2012, some patchy ice remained in the east Siberian Sea; however, the ice edge in the northeastern Beaufort and northern Chukchi Seas was further north, and some larger channels in the Canadian Archipelago were open (Figure 1b). 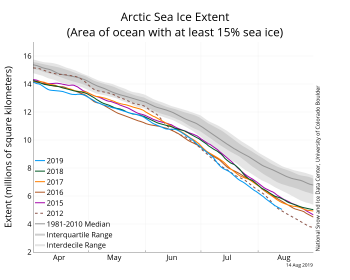 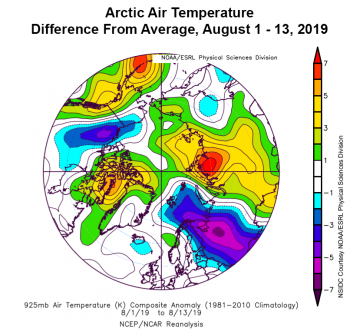 Over the first half of the month, air temperatures along the Siberian coast at the 925 hPa level (about 2,500 feet above the surface) were generally 2 to 7 degrees Celsius (4 to 13 degrees Fahrenheit) above the 1981 to 2010 average, and 1 to 6 degrees Celsius (2 to 11 degrees Fahrenheit) above average over the Canadian Archipelago (Figure 2b). This was partly balanced by below-average temperatures in northern Scandinavia and the Kola Peninsula by 4 to 6 degrees Celsius (7 to 11 degrees Fahrenheit), a sharp counterpoint to the near-record heat of the late July European heat wave. Near-average temperatures prevailed over the central Arctic Ocean and slightly lower-than-average temperatures were present along the North Slope of Alaska and northwestern Canada. The atmospheric circulation was characterized by high pressure over the Northern Pacific, the Aleutians, and Greenland, and by a center of lower air pressure over northern European Russia. This combination drove cool Arctic air into Scandinavia and easternmost Russia.

Smoke gets in your ice 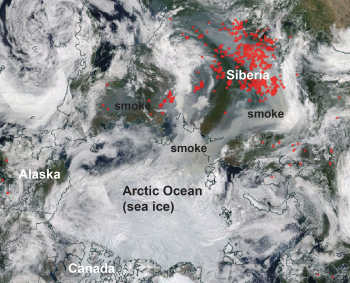 Figure 3. This NASA Worldview image from August 10, 2019, shows the locations of wildfires in the Arctic as detected by thermal images (not shown). Red areas indicate wildfires. Huge areas of burning forests in Siberia have filled the air with smoke over much of the Pacific side of the Arctic Ocean. This image was taken by the Moderate Resolution Imaging Spectroradiometer (MODIS) sensor on the NASA Terra satellite.

Huge areas of burning forests in Siberia have filled the air with smoke over much of the Pacific side of the Arctic Ocean. However, at this late stage in the melt season, with rapidly declining solar input, it is unlikely to have much impact on sea ice loss. The fires are a result of the very warm and dry spring and summer conditions over the eastern Siberian Arctic.

There is such a thing as too thin 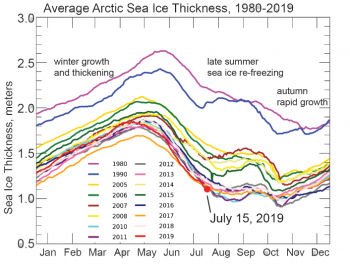 Figure 4a. This figure shows average Arctic sea ice thickness by month from 1980 t0 2019 as determined by the Pan-Arctic Ice Ocean Modeling and Assimilation System (PIOMAS). 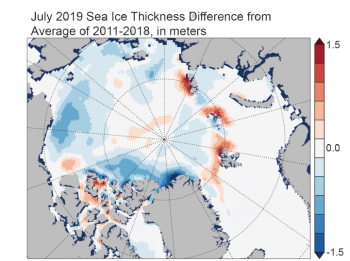 Figure 4b. This map shows Arctic sea ice thickness in July 2019 as a difference from average (in meters), relative to 2011 to 2018, from the Pan-Arctic Ice Ocean Modeling and Assimilation System (PIOMAS).

Arctic sea ice volume, as estimated by a well-validated model produced by our colleagues at the University of Washington, is tracking at low levels as seen from satellite observations (Figure 4a). Arctic sea ice cover is thus very thin in addition to being very low in extent. Average Arctic sea ice thickness is estimated to be less than half of what it was at this time of year in 1980.

Sea ice thickness follows the change in the seasons. Early in the year, cold conditions and snowfall steadily thicken the sea ice. At the start of the melt season, typically in March, the thinner southern edges of sea ice cover melt first. Hence, the average thickness of the remaining sea ice increases, even though spring ice retreat has begun. By June, when much of the Arctic Ocean surface has reached the melting point, rapid thinning of the ice pack begins. Thickness and extent both reach a minimum in September. However, even though ice extent continues to decline through August, average sea ice thickness begins to increase slightly as the thinner ice at the edge melts away. Then, after the minimum extent, typically reached in mid-September, a rapid increase of sea ice extent begins, with thin sea ice covering large areas of the Arctic Ocean in a few weeks. This rapid increase of very thin ice reduces the average ice thickness, even though sea ice extent is increasing rapidly.

Is a new record minimum possible? 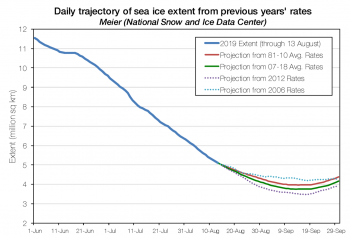