The pace of sea ice loss sharply quickened in the past ten days, triggered by a series of strong storms that broke up thin ice in the Beaufort and Chukchi Seas. Amundsen’s historic Northwest Passage is opening up; the wider and deeper route through Parry Channel is currently still clogged with ice. 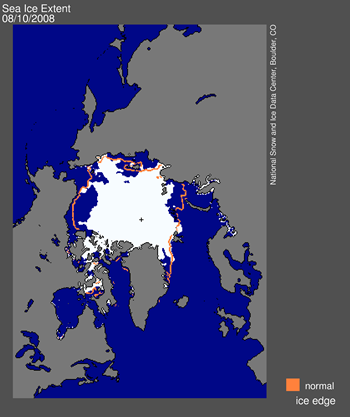 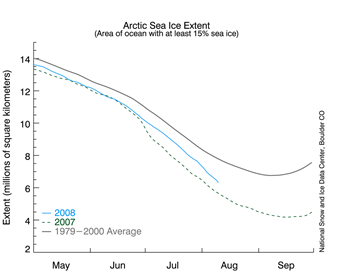 Many of the areas now seeing a rapid retreat saw an early melt onset (see July 2, 2008); this helped set the stage for rapid retreat (July 17 and April 7). However, the more fundamental issue is that these regions started the melt season covered with thin first-year ice, which is especially vulnerable to melting out completely. Thin ice is also vulnerable to breakup by winds; the last ten days have seen a windy, stormy pattern that has accelerated the ice loss. 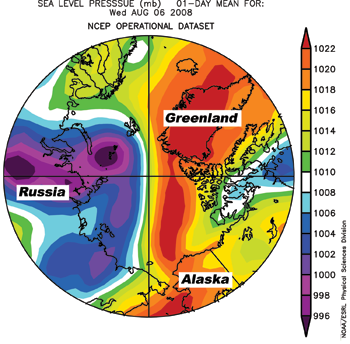 A series of storms north of Alaska and Siberia in late July and early August have helped break up the thin ice and have brought warm southerly winds into the region.

Subsequently, a pattern has developed with high pressure over the Beaufort Sea and low pressure over the Laptev and East Siberian Seas (Figure 3). In accord with Buys Ballot’s Law, this pattern has brought southerly winds to the region, enhancing melt, breaking up ice, and pushing the ice edge northward. 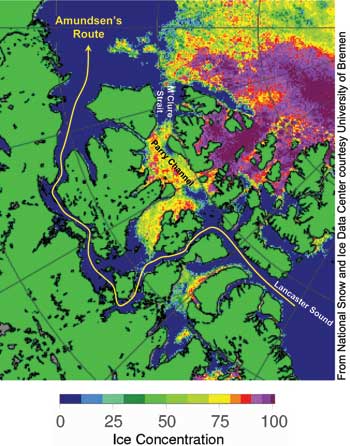 The Northwest Passage that Roald Amundsen navigated with great difficulty starting in 1903 is opening for the second year in a row, as shown in the AMSR-E sea ice product from the University of Bremen (Figure 4).

The most recent operational analysis from the Canadian Ice Service and the U.S. National Ice Center on August 8 showed a small section of Amundsen’s historic path still blocked by a 50-kilometer (31-mile) stretch of sea ice, although that should melt within the next few days.

Amundsen’s route requires sailing through treacherous narrow and shallow channels, making it impractical for deep-draft commercial ships. The more important northern route, through the wide and deep Parry Channel, is still ice-clogged. The northern route opened in mid-August last year; it may still open up before the end of this year’s melt season.