The Arctic sea ice is now at the peak of the melt season. Although ice extent is below average, it seems less likely that extent will approach last year’s record low.

The pace of summer decline is slower than last year’s record-shattering rate, and peak sunlight has passed with the summer solstice.  However, at least six weeks of melt are left in the season and much of the remaining ice is thin and vulnerable to rapid loss. A race has developed between the waning sunlight and the weakened ice. 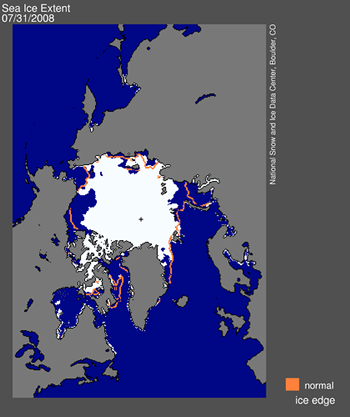 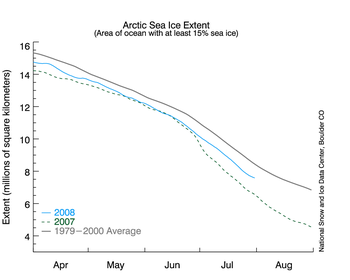 Sea ice extent continues to decline, but we have not yet seen last July’s period of accelerated decline. Part of the explanation is that temperatures were cooler in the last two weeks of July, especially north of Alaska.

Because we are past the summer solstice, the amount of potential solar energy reaching the surface is waning. The rate of decline should soon start to slow, reducing the likelihood of breaking last year’s record sea ice minimum. 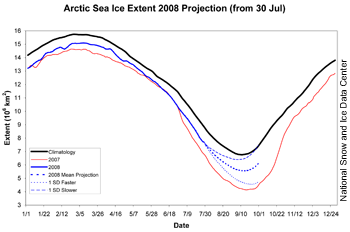 If the Arctic experiences a normal decline rate, the minimum extent will be between the second-lowest extent, which occurred in 2005, and the third-lowest extent, which occurred in 2002. Even at a rate one standard deviation faster than normal, the extent will not fall below last year’s minimum—so it appears unlikely that we will set a new record low. 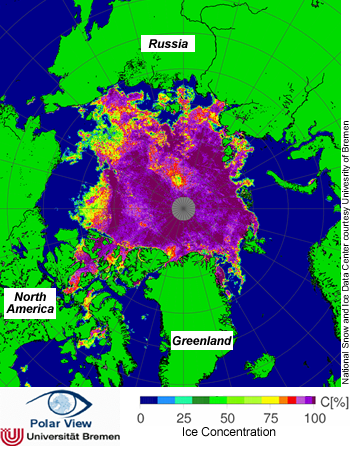 But a more vulnerable ice cover

Nevertheless, it is perhaps too soon to make a definitive pronouncement concerning this year’s probable extent at the summer minimum.  The Arctic sea ice is in a condition we have not seen since satellites began taking measurements. As discussed in our April analysis, thin first-year ice dominated the Arctic early in the melt season. Thin ice is much more vulnerable to melting completely during the summer; it seems likely that we will see a faster-than-normal rate of decline through the rest of the summer.

Building on our July 17 analysis, the fragility of the current ice conditions is evident in the sea ice concentration fields produced at the University of Bremen using NASA Advanced Microwave Sounding Radiometer (AMSR) data. Widespread areas of reduced ice concentration exist, particularly in the Beaufort Sea. Even north of 85 degrees latitude, pockets of much-reduced ice cover appear. The passive microwave data used in Figure 4 tends to underestimate ice concentration during summer because melt water on the surface of the ice can be mistaken for open water. Nevertheless, such low concentrations indicate strong melt and a broken, thin ice cover that is potentially vulnerable to rapid melt. 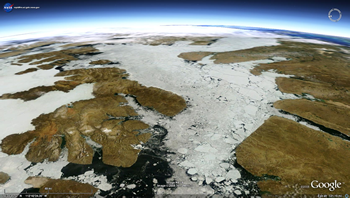 Visible-band imagery from the NASA Moderate Resolution Imaging Spectroradiometer (MODIS) sensor shows a more detailed picture of the ice than AMSR-E. Looking east into the Northwest Passage on July 28, the image confirms the low ice concentrations revealed in the AMSR-E data.

So, will we break last year’s record low minimum extent? Will the North Pole become ice-free? Probably not this year. However, the ice is in a vulnerable state and there are six weeks of melting left, so a lot can still happen.

And perhaps the most important point as we continue to watch this season’s evolving ice cover is that, whether or not Arctic sea ice sets a new record low, this year continues the pattern of well-below-average ice extent seen in recent years.