Summer in the Arctic is drawing to a close, and sea ice extent is likely to remain higher than in recent years. Several polynyas have formed poleward of 85 degrees North within the pack as well as areas near the thin ice edge. While some thin ice can still be found in the Northern Sea Route and southern Northwest Passage, both appear to be largely open. The northern deep water Northwest Passage route also appears to be largely open. Antarctic sea ice has remained at record or near-record low extent for the month. 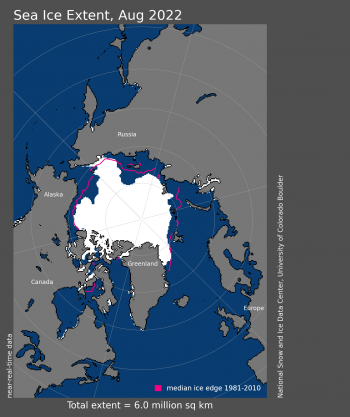 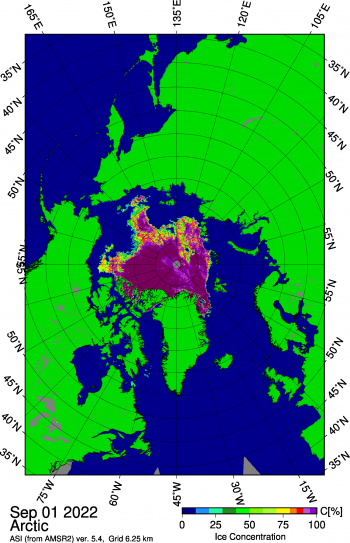 Average Arctic sea ice extent for August 2022 was 5.99 million square kilometers (2.31 million square miles), ranking thirteenth lowest in the satellite record (Figure 1a) and 1.21 million square kilometers (467,000 square miles) below the 1981 to 2010 average. Ice extent tracked below the interdecile range of the satellite record through the month, and the total ice loss through the month was 1.79 million square kilometers (691,000 square miles). Extent remained particularly low in the Laptev and Chukchi Seas. As seen in the Advanced Microwave Scanning Radiometer 2 (AMSR2) imagery, areas of low concentration ice that started to develop poleward of 85 degrees North in July developed into areas of open water within the pack ice, or polynyas (Figure 1b). These features are much further north than is typical. On the Atlantic side, the ice edge remained north of Svalbard and Franz Josef Land, continuing the pattern seen for most of the season. 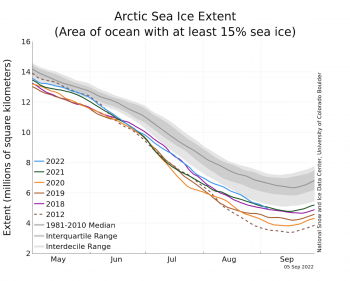 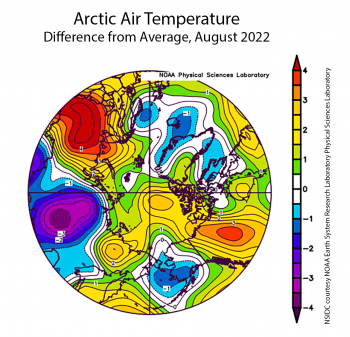 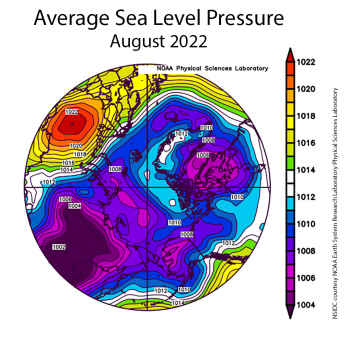 Air temperatures over the central Arctic Ocean at the 925 hPa level (about 2,500 feet above the surface) were generally 1 to 3 degrees Celsius (2 to 5 degrees Fahrenheit) above 1991 to 2020 reference period (Figure 2b). Conditions in the Barents Sea and southern Kara Sea were particularly warm, ranging up to 4 degrees Celsius (7 degrees Fahrenheit) above average. However, temperatures over the Bering Sea and the Denmark Strait (between Iceland and Greenland) were slightly below average.

The sea level pressure pattern for August favored winds from the south and west toward Europe, and cool air moving out of the Arctic over the Laptev Sea coast in Siberia (Figure 2c). Low air pressure over Alaska led to winds from the north over the Bering Sea, consistent with the below-average temperatures in that area.

While the summer melt season is nearly over, the forecast for early September is for above-average air temperatures over the central Arctic. Coupled with the thin and dispersed sea ice cover, and residual heat in the upper ocean where low sea ice concentration permitted some solar warming earlier in the summer, we may see an expansion of the polynyas near the North Pole for a time in early September. 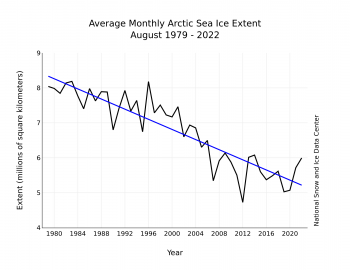 As of the August 27, sea ice area in the northern (deep water) route of the Northwest Passage (NWP) was tracking well below the 1991 to 2020 average (Figure 4, top) but above 2011 record low conditions. High concentrations of multi-year ice were still present in some areas. Ice area in the southern route (Amundsen’s route in 1905) was also tracking well below the 1991 to 2020 average (Figure 4, bottom). The southern route was almost sea ice-free as of late August except for some low concentration first-year ice in the vicinity of Victoria Strait. The northern route of the Northwest Passage is considered to eventually be more viable for shipping. Mudruyk and team discuss the impact of the current warming trend on potential shipping through the Canadian Arctic, noting large increases in navigability of the NWP and other parts of the Arctic with 2 degrees Celsius (4 degrees Fahrenheit) global warming above pre-industrial levels. Even non-ice strengthened vessels may have a 15-day season of operation in the northern NWP according to their study. By contrast, the Northern Sea Route has been nearly free of ice for at least part of August and September for most of the past decade, and it is used increasingly for shipping both within the Russian Arctic and from Arctic ports to the Far East. 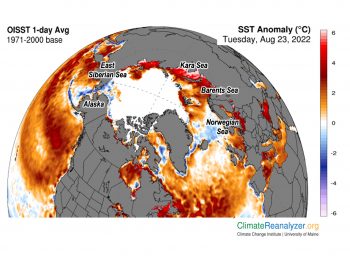 Figure 5. This map shows sea surface temperatures (SSTs) for the Arctic and much of the northern Atlantic and Pacific Oceans, as well as the peripheral seas in the northern hemisphere. Data shows SSTs on August 23, 2022. Extremely warm ocean conditions exist along parts of the Siberian coast, but cooler than average conditions are found in the Bering Sea and Norwegian Sea.

According to our colleague, Mike Steele, at the University of Washington Polar Science Center, Pan-Arctic sea surface temperatures (SSTs) in late August are generally above average relative to the 1971 to 2000 reference period (Figure 5). However, Alaskan Arctic SSTs this year are lower than average, likely because the relatively late sea ice retreat limited warming through solar heating. Meanwhile, SSTs on the Russian continental shelf from the eastern Barents Sea to the western East Siberian Sea are far above average. Ice retreat was early there, allowing the upper ocean to warm more strongly through solar heating, with advection of warm air in the southern Barents and Kara Seas (Figure 2 in the August 17 post) perhaps also playing a role.