Arctic spring melt has begun. Ice extent declined most substantially in the Bering Sea and the Sea of Okhotsk. Overall decline was slower than average through the month. 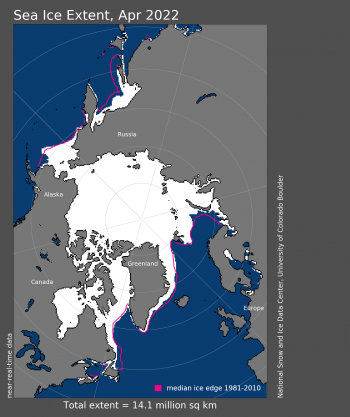 Average Arctic sea ice extent for April 2022 was 14.06 million square kilometers (5.43 million square miles) (Figure 1). This was 630,000 square kilometers (243,000 square miles) below the 1981 to 2010 average and ranked eleventh lowest in the 44-year satellite record. Extent declined slowly through the beginning of the month, with only 87,000 square kilometers (33,600 square miles) of ice loss between April 1 and April 10. The decline then proceeded at an average pace for this time of year through the reminder of the month. Reductions in sea ice extent during April occurred primarily in the Bering Sea and the Sea of Okhotsk. Other regions had small losses at most. The southern Barents Sea lost some ice, but the channel of open water north of Novaya Zemlya that persisted for much of the winter closed during April. Overall, the daily sea ice extent tracked just below the interdecile range (below 90 percent of past daily values) for the month. 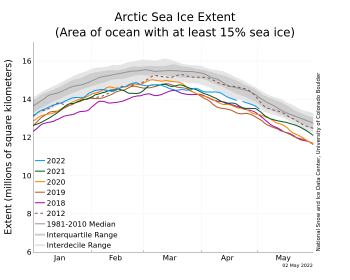 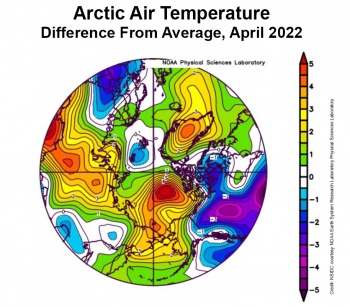 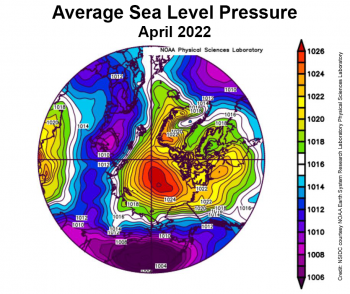 Figure 2d. This animation (click to see animation) shows the polynyas, or openings in the ice cover, that formed in the Chukchi Sea from April 12 to 30, 2022. In April, strong offshore winds over the northwest coast of Alaska led to the formation of these polynyas.

Strong offshore winds over the northwest coast of Alaska led to openings in the ice cover, called polynyas. The first pulse of winds began on March 21. At that time, surface air temperatures were still well below freezing, and the water in the coastal polynya quickly refroze. By April 9, the offshore push of the ice ceased and the polynya iced over completely. However, starting on April 12, a second round of offshore wind pushed the ice away from the coast, initiating another polynya. Refreezing began anew in the open water areas, but the ice growth was noticeably slower, reflecting the higher surface air temperatures by the end of the month (Figure 2d). 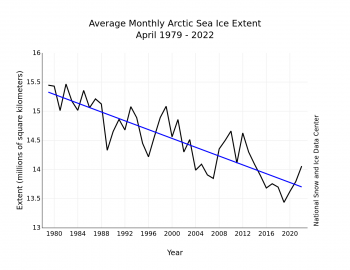 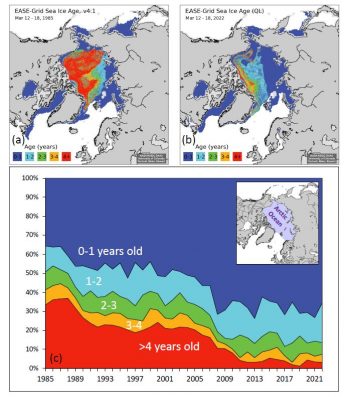 With the onset of spring, it is time again for a check-in on sea ice age—the number of years that a parcel of ice has survived summer melt. As noted in previous posts, ice age provides a qualitative assessment of thickness, as older ice has more chances to thicken through ridging, rafting, and bottom ice growth (accretion) during winter. The coverage of the old, thick ice has a significant control on how much total ice survives the summer melt season—the first-year ice that grows thermodynamically over winter is more easily melted away during summer. That which survives through the summer melt season grows in age by one year. The extent of old ice declines through the winter when it drifts out of the Arctic through the Fram or Nares Strait. At the end of last summer, the extent of the oldest ice (greater than 4 years old) tied with 2012 for the lowest in the satellite record. This spring, we continue to see a dominance of first-year ice (Figure 4). The percentage of the greater than 4-year-old ice, which once comprised over 30 percent of the Arctic Ocean, now makes up only 3.1 percent of the ice cover. 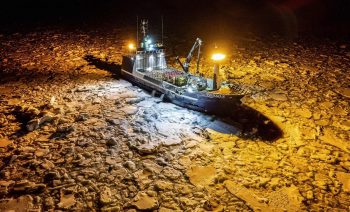 The Bering Sea is an important crab fishery, with several species represented. Crab fishing is dangerous work because of frequently rough seas, icing on the ship’s superstructure, and dense pack ice (Figure 5). This past winter, the population of lucrative snow crabs was down substantially. This decline in crabs appears to be related to low sea ice extent during the 2018 and 2019 winters. Snow crabs prefer cold bottom water that protects the young from predators. The cold-water pool on the Bering Sea floor is caused by winter ice formation where dense, cold, and salty water sinks as the ice grows. However, in 2018 and 2019 there was very little ice. This opened young crabs to more predation, and far fewer survived to maturity. 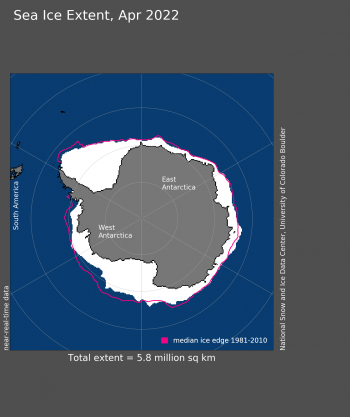 After the record low minimum Antarctic sea ice extent at the end of February and the strong heat wave that followed in mid-March, conditions in the Southern Ocean have calmed down. Ice extent remains low for this time of year below the interdecile range, but is above 2017, 2018, and 2019, as well as 1980. Extent remained below average in the Weddell, eastern Ross, and western Amundsen-Bellingshausen regions, but near average around the rest of the continent (Figure 6). Through April, ice extent increases in all regions around the continent, but with relatively slower growth in the Amundsen-Bellingshausen Seas. 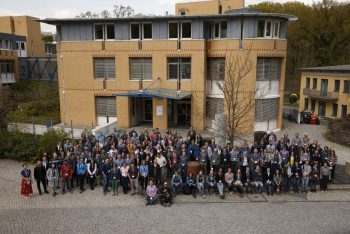 Figure 7. The first in-person Multidisciplinary Drifting Observatory for the Study of Arctic Climate (MOSAiC) science conference was held at the end of April in Potsdam, Germany. This was the first chance to present findings from the year-long expedition and pave the way for future analysis and collaboration.

The Multidisciplinary Drifting Observatory for the Study of Arctic Climate (MOSAiC) expedition took place during 2019 and 2020 when the German icebreaker, Polarstern, was frozen into the ice and drifted across the Arctic for nearly a year. During the year, numerous observations were taken of the atmosphere, ocean, sea ice, and biogeochemistry. The scientific analysis is ongoing, and exciting results are starting to be reported.

The first in-person MOSAiC science conference was held at the end of April in Potsdam, Germany (Figure 7). This was the first chance to present findings from the year-long expedition and pave the way for future analysis and collaboration. Science teams from each discipline (atmosphere, ocean, sea ice, snow, remote sensing, ecosystem, biogeochemistry) discussed initial research results. Key to the success of MOSAiC is the strong interdisciplinary collaboration of the projects needed to provide a holistic understanding of Arctic Ocean changes and their impacts. NSIDC scientist Julienne Stroeve presented on the impacts of a rain-on-snow event in mid-September and the potential impact this would have on satellite retrievals of sea ice concentration, snow depth, and ice thickness. In January 2023, all MOSAiC data collected will be made available to the wider science community. 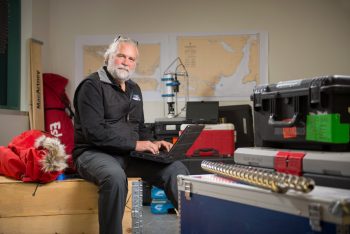 Figure 8. Polar scientist David Barber of the University of Manitoba passed away on April 15, 2022.

It is with sadness that we note the passing of one of the world’s pre-eminent polar scientists, David Barber, of the University of Manitoba, who died on April 15, 2022. He was a force in Canadian science, leading several large projects that increased understanding of sea ice and the Arctic.