May saw above average temperatures over nearly all of the Arctic Ocean, Baffin Bay, and Greenland. Early sea ice retreat in the Bering Sea extended into the southern Chukchi Sea. Northern Baffin Bay and the Nares Strait have low ice cover. By month’s end, open water extended along the northeastern Alaskan and northwestern Canadian coasts, all well ahead of schedule. However, this was partly balanced by slower-than-average ice loss in the Barents Sea. At the end of May, Arctic sea ice daily extent stood at second lowest in the 40-year satellite record. 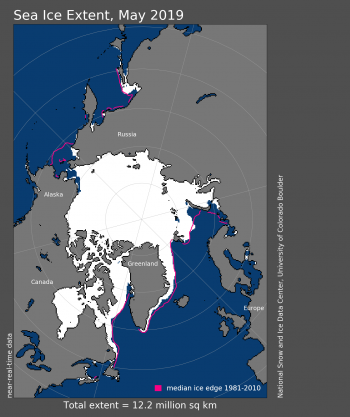 Although ice loss in the Barents Sea was rapid in early May, it subsequently slowed and extent slightly increased late in the month. There was nevertheless an overall ice retreat for May as a whole. Around mid-month, a polynya began to open at the north end of Baffin Bay, near the Nares Strait. At about this time, an ice arch that restrains southward ice drift in the Lincoln Sea began to fail, allowing transport of ice through the strait and creating a small polynya northwest of Greenland (discussed below). By the end of May, other polynyas started to form around the New Siberian Islands as well as Severnaya Zemlya, and open water began to develop along coastal regions in the Kara Sea and in northern Hudson Bay. 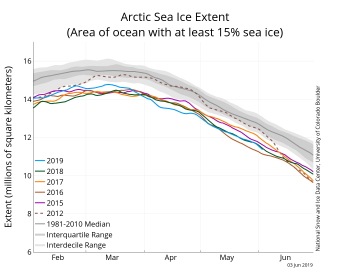 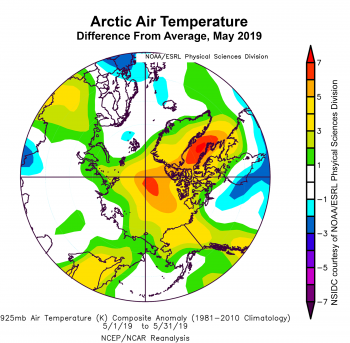 May 2019 compared to previous years 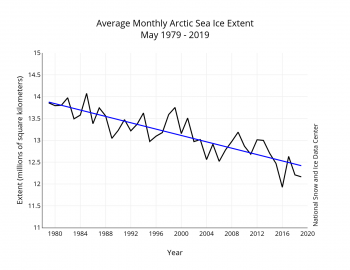 Ice arch break up in the Lincoln Sea 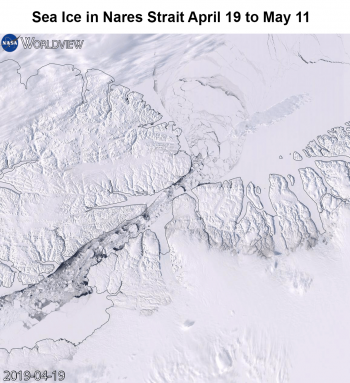 In most years (2007 being a notable exception), an ice arch forms during late autumn and winter at the north end of Nares Strait, the narrow passage that separates Greenland from Ellesmere Island. This arch acts as a barrier, preventing ice from the Arctic Ocean from drifting through the strait and into Baffin Bay. The arch typically breaks up in June or July, allowing ice to drift through the narrow channel. This year, the arch broke up by late March, much earlier than is typical. Since then, there has been a steady flow of ice through Nares Strait (download animation to view). Since 2000, only four other years appear to have had similar early breakups of the arch: 2007 (when no arch formed at all), 2008, 2010, and 2017 (Moore et al., 2018). Typically, strong wind events trigger the break up, but warm temperatures and thinner ice can also contribute. 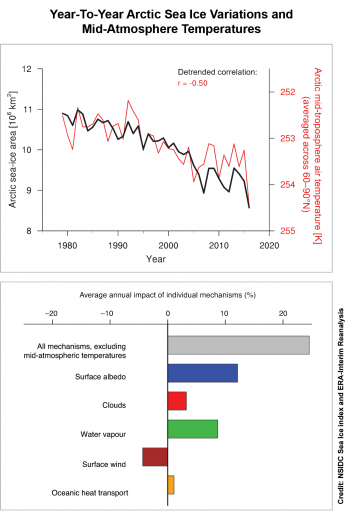 Figure 5. The top figure shows how the year-to-year sea ice area co-varies with mid-atmosphere temperatures (average of temperatures between 850 HPa to 400 HPa, or about 5,000 to 25,000 feet above sea level). The below bar graph provides the contributions of other suggested mechanisms. Combined, they account for about 25 percent of the sea ice variations. The direct influence of mid-atmosphere temperature fluctuations remains as the primary cause of year-to-year sea-ice variations.

While Arctic sea ice extent is declining sharply, it is also highly variable from one year to the next. Scientists from the Max Planck Institute for Meteorology (MPI-M) and the University of Stockholm have proposed that this strong variability is closely related to fluctuations in the air temperature above the Arctic Ocean driven by atmospheric heat transport into the Arctic from lower latitudes. In contrast to previous assumptions, they argue that other factors, such as the ice-albedo feedback, cloud and water vapor feedbacks, and oceanic heat transported into the Arctic together explain only 25 percent of the year-to-year sea ice extent variations. Most of the sea ice variations are thus directly caused by mid-atmospheric temperature conditions; this is evident in both observational data and climate models. Their study implies that year-to-year fluctuations in sea ice extent are easier to understand than previously thought. However, their study also suggests that it may be more difficult to predict the summer extent of Arctic sea ice from one year to the next, because the problem of predicting atmospheric heat transport is closely related to the challenges of long-term weather forecasting. 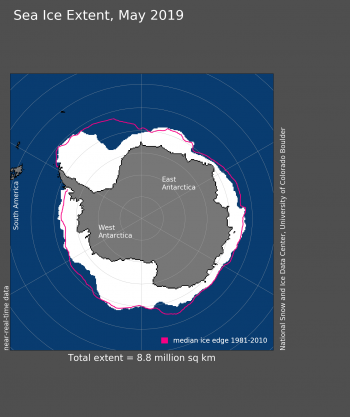 Antarctic sea ice extent continues to climb toward its seasonal maximum, which is expected in late September or early October. At the end of May, Antarctic sea ice extent was very close to record daily lows over the period of satellite observations, previously set for the month in 1980. Unusually low ice extent in the eastern Weddell Sea and northern Amundsen Sea are responsible for the low overall total extent, with smaller areas of open water in the eastern Wilkes Land coastal region and southwestern Indian Ocean (Cosmonaut Sea). Slightly above average sea ice extent is present in the north-central Ross Sea and northwestern Weddell Sea.