Nearly frozen up by the end of October, the Arctic Ocean still showed small regions of open water within the Beaufort and Chukchi seas on its western side, and within the Kara Sea on its eastern side. These open water areas contributed to warmer than average air temperatures over the western Arctic. 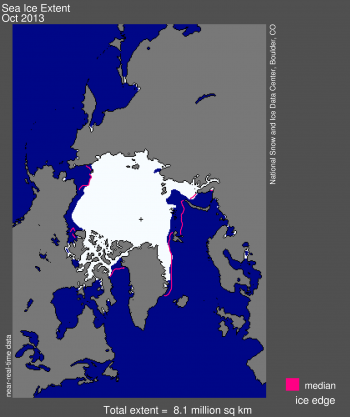 As open water areas refreeze and continue to lose the heat gained during the summer back to the atmosphere, near surface air temperatures have remained higher than average over areas that have not yet completely frozen over. As of the beginning of November, small parts of the Beaufort, Chukchi, and Kara seas remain ice free, while the East Siberian and Laptev seas have completely frozen over. Higher than average air temperatures have been observed over the ice-free regions while the rest of the Arctic is at near average to below average temperatures. This is in contrast to the first half of October 2012 when large parts of the East Siberian and Laptev seas remained ice free and the entire Arctic was warmer than average. 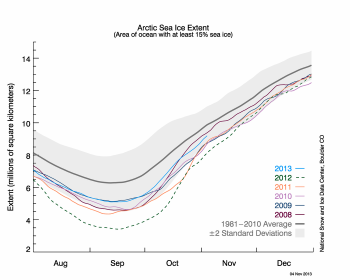 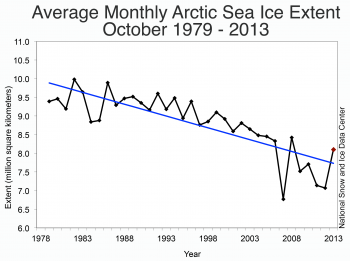 Sea ice decline and the greening of Arctic tundra 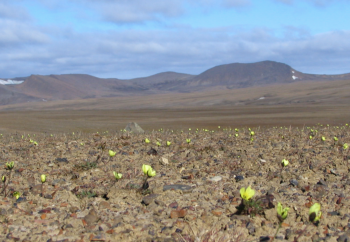 Figure 4. Yellow flowers (Papaver dahlianum), typical of the high Arctic subzone A, dot the tundra on Ellef Ringnes Island in Nunuvut, Canada. Arctic tundra is the coldest of the Circumpolar Arctic Vegetation Map’s bioclimate subzones. The subzones range from mean July temperatures just above freezing in the tundra (Subzone A) to mean July temperatures of around 10 degrees Celsius in Subzone E where shrubs can reach up to heights of 2 meters.

As sea ice extent declined over the past years, Arctic tundra has received an increased amount of summer warmth and has gotten greener. Arctic tundra (Figure 4) is a maritime biome, most of which can be found within 100 kilometers (62 miles) of seasonally ice-covered seas. This proximity to sea ice limits the tundra’s exposure to available warmth and vegetation growth. Over 30 years of remote sensing data show that the decline in sea ice extent corresponds to land surface warming (Figure 5, left panel) and increased vegetation cover (Figure 5, right panel, Maximum Normalized Difference Vegetation Index, or MaxNDVI). When sea ice extent is below average in coastal seas, land surfaces warm, and satellites see a stronger signal of vegetation. 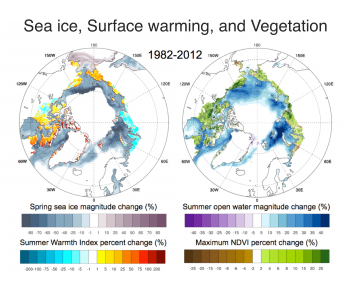 However, the same data offer a few puzzles. While land surface warming and vegetation cover have steadily increased in the vicinity of Greenland over the last thirty years, warming and vegetation have actually decreased in some parts of Eurasia over the last decade. This suggests that once sea ice declines or the climate warms beyond a limit, other processes begin to play a more central role in summer climate variability, such as moisture availability in the soil or cloudiness, which can lead to cooler conditions during the northern summer. Another mystery is the decline in vegetation cover over the southwest Alaskan tundra despite an increase in land surface temperature over the same period. Researchers are looking into these puzzles as they think ahead to what the tundra may look like in a future of ice-free summers.