Arctic sea ice extent at end of December 2009 remained below normal, primarily in the Atlantic sector of the Arctic. Average air temperatures over the Arctic Ocean were much higher than normal for the month, reflecting unusual atmospheric conditions. Finally, we provide a review of 2009 Arctic sea ice conditions. 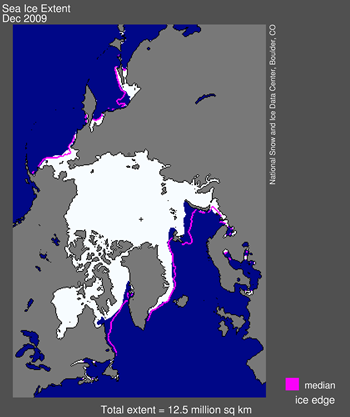 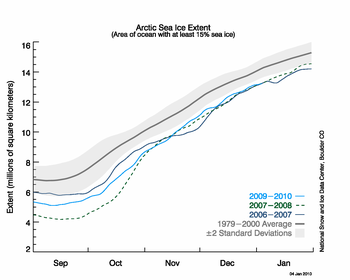 During December 2009, ice extent grew at an average of 68,000 square kilometers (26,000 square miles) per day. Sea ice extent increased at a fairly steady rate throughout the month, staying slightly above the levels observed in December 2007. 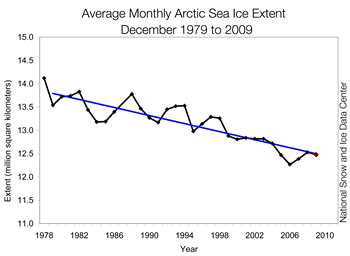 December 2009 compared to past years

December 2009 had the fourth-lowest average ice extent for the month since the beginning of satellite records, falling just above the extent for 2007. The linear rate of decline for December is now 3.3% per decade. 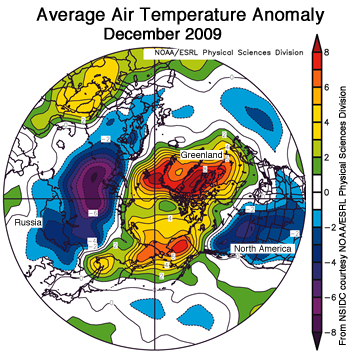 December air temperatures over the Arctic Ocean region, eastern Siberia, and northwestern North America were warmer than normal. In contrast, temperatures in Eurasia, the United States, and southwestern Canada were below average. The strongest anomalies (more than 7 degrees Celsius/13 degrees Fahrenheit) were over the Atlantic side of the Arctic, including Baffin Bay and Davis Strait, where ice extent was below average. 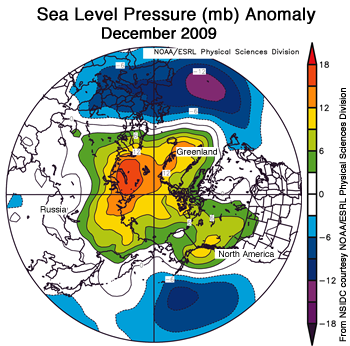 The phase of the AO is described in terms of an index value. In December 2009 the AO index value was -3.41, the most negative value since at least 1950, according to data from the NOAA Climate Prediction Center.

While a negative AO leads to warmer temperatures over the Arctic, it also tends to reduce the flow of sea ice out of the Arctic by affecting the winds that can export the ice to warmer waters, where it melts. In this way, a negative AO could help retain some the second- and third-year ice through the winter, and potentially rebuild some of the older, multiyear ice that has been lost over the past few years. However, we do not yet know if the strongly negative AO will persist through the winter, or what its net effect will be.

For more information on the AO, see the NSIDC Arctic Meteorology and Climatology Primer.

The minimum ice extent in September 2009 was greater than the past two Septembers, but again fell below the long-term average. The melt season began with a young, thin Arctic sea ice cover, suggesting that significant amounts of ice would be lost during the melt season. However, a cooler summer with favorable winds helped preserve the ice.

Despite the cool summer, the ice remained thin and vulnerable at the sea ice minimum, with little of the older, thicker ice that used to characterize much of the Arctic. Recently published research by Barber and colleagues shows that the ice cover was even more fragile at the end of the melt season than satellite data indicated, with regions of the Beaufort and Chukchi Seas covered by small, rotten ice floes.