Arctic Sea Ice News RSS feed for automatic notification of analysis updates. Updates are also available via Twitter.Atmospheric circulation patterns in August helped spread out sea ice, slowing ice loss in most regions of the Arctic. NSIDC scientists expect to see the minimum ice extent for the year in the next few weeks. While this year’s minimum ice extent will probably not reach the record low of 2007, it remains well below normal: average ice extent for August 2009 was the third-lowest in the satellite record. Ice extent has now fallen below the 2005 minimum, previously the third-lowest extent in the satellite record. 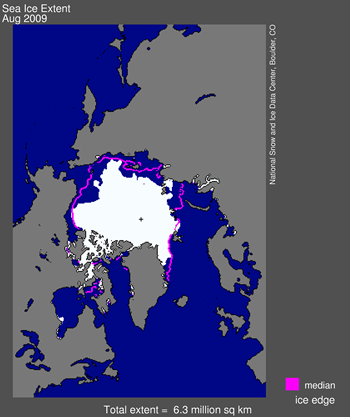 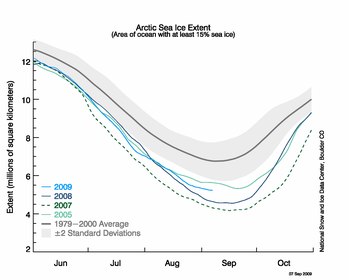 On September 2, Arctic sea ice extent dropped below the minimum extent for 2005. This year is now the third-lowest ice extent in the satellite record, with one to two weeks left in the melt season. 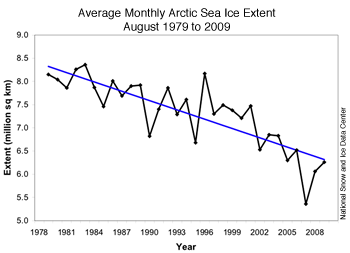 August 2009 compared to past years

Arctic sea ice extent for August 2009 was the third lowest August since 1978, continuing the downward trend observed over the last three decades. Only 2007 and 2008 had lower ice extent during August. The long-term trend indicates a decline of 8.7% per decade in August ice extent since 1979. 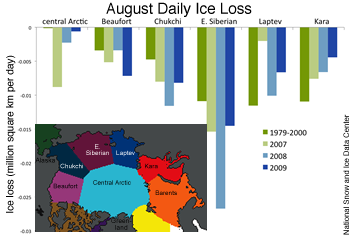 High ice loss in the Beaufort Sea and Siberian Arctic

This August, the Beaufort Sea lost more ice than in either 2007 or 2008. In other regions of the Arctic, ice loss rates were about the same as in August 2007, except in the central Arctic, where more ice was lost in 2007. These year-to-year differences in regional ice loss rates reflect variations in surface wind and temperature patterns that affect the ice motion and melt.

Overall, ice loss rates this year were slower than than in August 2008, when ice declined at record rates. But because the July 2008 rate of decline was slower, the minimum ice extent in September 2008 did not reach the 2007 record low. 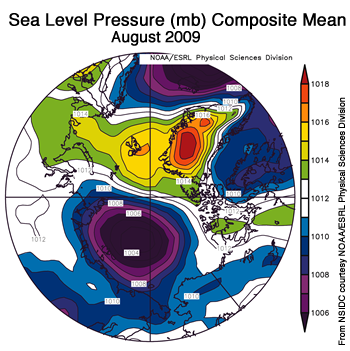 Figure 5. The map of sea level pressure (in millibars) for August 2009 shows a low pressure system over the Beaufort and Chuckchi seas, and high pressure over Greenland, which led to faster ice loss in the Beaufort Sea and a slower decline in the Kara and Laptev seas and the central Arctic.—Credits: From National Snow and Ice Data Center courtesy NOAA/ESRL Physical Sciences Division
High-resolution image

Studies by Mark Serreze, Masayo Ogi, and other researchers have shown that low-pressure patterns promote spreading of the ice pack, a process known as divergence. While ice divergence increases extent, it can also accelerate melt because there are more dark, open-water areas between the floes to absorb the sun’s energy, promoting melt on all sides of the floes. 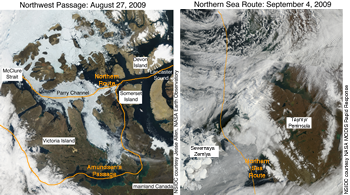 Sea routes in the Arctic

The Northwest Passage is not a single passage, but rather a number of possible routes through the channels of the Canadian Arctic Archipelago. Satellite images show that the shallow and narrow southern route, which Amundsen navigated in 1905, appeared to open briefly this August. This route was also open in 2007 and 2008. The deeper northern route, of great interest for potential commercial transport, was open in 2007 but is still blocked by ice this year.

On the other side of the Arctic, the Northern Sea Route is open along most of the route, except for a narrow band of ice between the islands of Severnaya Zemlya and the Siberian mainland. Ice tends to persist in this area because of winds that push ice into the constrained region. Even during the record low extent year of 2007, the area around Severnaya Zemlya remained clogged with ice.

Evidence based on satellite data should not be taken as proof of safe conditions for shipping—hazardous areas of ice may remain.

Three papers published in the past month have added important insight to our understanding of Arctic warming and sea ice decline. Elizabeth Hunke and Cecilia Bitz show that improved models can now reproduce the changes in sea ice extent and sea ice age that have occurred in the last 30 years. Ron Kwok and Drew Rothrock combine satellite data and submarine measurements to show an astonishing decline in sea ice thickness over the last 50 years. And Darrell Kaufman and colleagues show that recent warming has reversed a 2,000-year cooling trend in the Arctic, and that this cooling was what would be expected from slow changes in Earth’s orbit. The recent changes cannot be explained by these natural factors.