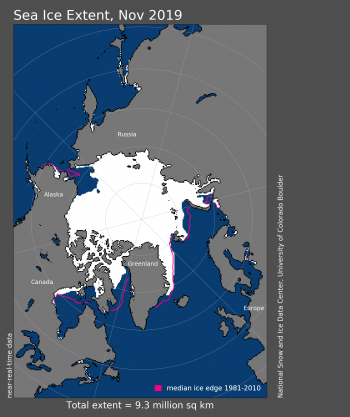 At the end of November and through the first week of December, daily extent was tracking third lowest in the satellite record, behind 2006 and 2016. Average ice extent for the month, however, finished second lowest in the passive microwave satellite record at 9.33 million square kilometers (3.60 million square miles). This was 670,000 square kilometers (259,000 square miles) above the 2016 record low for the month and 1.37 million square kilometers (529,000 square miles) below the 1981 to 2010 average. Regionally, extent remains well below average in the Chukchi Sea, as well as in Hudson Bay and Davis Strait. Extent is also below average in the Barents Sea, but not as pronounced as has been observed in recent years. Ice now extends to the shore along most of the Russian Arctic and along the coast of the Beaufort Sea. Extent is near average in the East Greenland Sea. 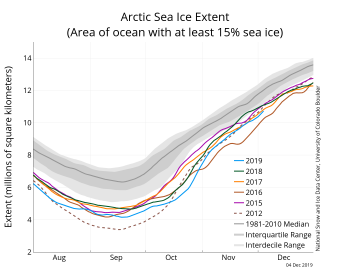 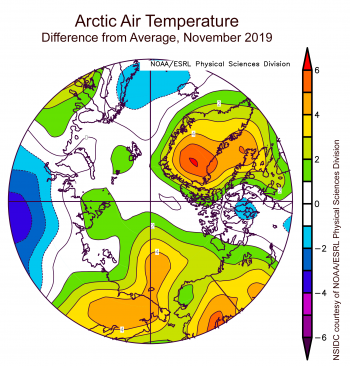 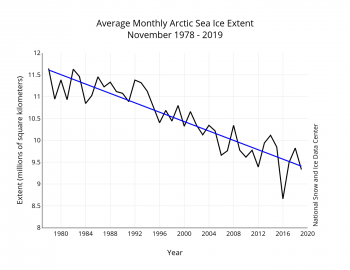 As assessed over the period of satellite observations, Arctic sea ice extent for November 2019 was 9.33 million square kilometers (3.60 million square miles), the second lowest in the satellite record. The linear rate of sea ice decline for November is 53,800 square kilometers (20,800 square miles) per year, or 5.02 percent per decade relative to the 1981 to 2010 average. 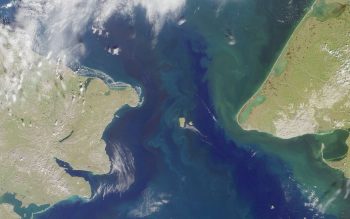 Figure 4. This Terra satellite image uses the multi-angle imaging spectroradiometer (MISR) instrument to visualize the Bering Strait, with the Chukchi Sea to the north. Russia is on the left, Alaska is on the right. The Strait is about 85 kilometers across (53 miles). Warm water from the Pacific Ocean enters the Arctic Ocean via the Bering Strait.

Recent work has shown that the transport of ocean heat into the Chukchi Sea through the Bering Strait strongly influences sea ice conditions in the region (Figure 4). This ocean heat transport, which is monitored by a buoy in the strait, depends on both the volume and temperature of this transported water. Recent work by C. Peralta‐Ferriz and R. Woodgate at the University of Washington in Seattle shows that variability in the volume inflow relates in considerable part to the strength of winds in the East Siberian Sea that act to raise or drop sea level in this area. A follow on paper by NSIDC scientists M. Serreze and A. P. Barrett, along with A. Crawford from Wooster College and R. Woodgate reveals that the winds in the East Siberian Sea that affect the Bering Strait inflow also relate to a broader atmospheric pattern of high versus low pressure over the central Arctic Ocean that influences September sea ice extent for the Arctic as a whole. Some recent large ocean heat transports through the Bering Strait are associated with high water temperatures, consistent with the persistence of open water in the Chukchi Sea into winter and early ice retreat in spring. The stubbornly slow freeze up in the Chukchi Sea this autumn may well reflect the effects of ocean heat transport. 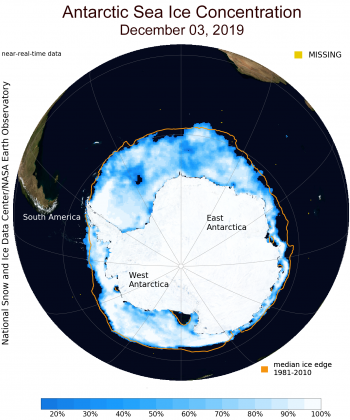