Following rapid ice loss in the first half of July, the pace of seasonal ice retreat slowed the rest of the month partly due to the return of a stormy weather pattern over the central Arctic Ocean. The timing of melt onset for 2013 was in general unremarkable. Ice extent remains below average on the Atlantic side of the Arctic, and near average in the Beaufort and Chukchi seas, and along the Eurasian coast. 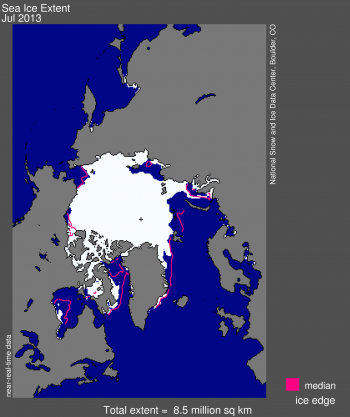 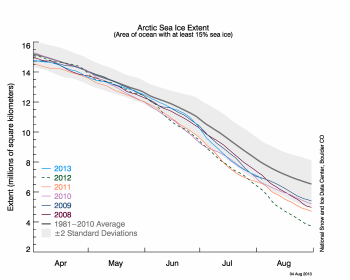 While sea ice extent retreated rapidly through the first two weeks of July when the weather was dominated by high pressure and clockwise winds over the central Arctic Ocean, the pace of ice loss for the last half of the month was slower. This was partly due to the return of a stormy pattern that brought more counterclockwise winds and cool conditions, and spread the ice out. This spreading of the ice, or ice divergence, can result in more dark open water areas between individual floes that enhance absorption of the sun’s energy, leading to more lateral and basal melting. However, the effects of cooler conditions and ice divergence on the overall ice extent depend in part on the thickness of the ice. Historically, stormy summers tended to end up with more ice than summers characterized by high pressure and few storms. As the ice cover has thinned, stormy conditions may actually help to remove more ice. 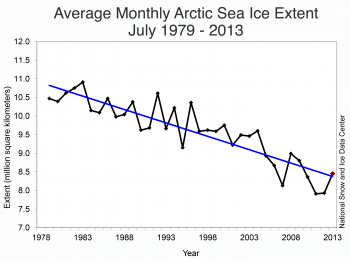 Summer is the stormiest season over the central Arctic Ocean, but the situation can vary greatly within a month (as has been the case for July 2013), from month to month, and year to year. The summer storms in this region can occasionally be quite strong and there has been some discussion that, like hurricanes, strong Arctic storms should be named, perhaps drawing on the Inuit language. Last August, a cyclone in the region attained a central pressure as low as 964 hPa, with attendant strong winds. As just discussed, summers characterized by stormy conditions tend to end up with more sea ice than summers characterized by high pressure. However, the effects of an individual strong storm can be complex. It appears that the August 2012 storm was attended by a modest acceleration in the pace of summer ice loss. While the middle of July 2013 also saw a storm over the central Arctic Ocean with a central pressure of 977 hPa, this year’s event has not led to a strong ice loss.

A note on melt ponds 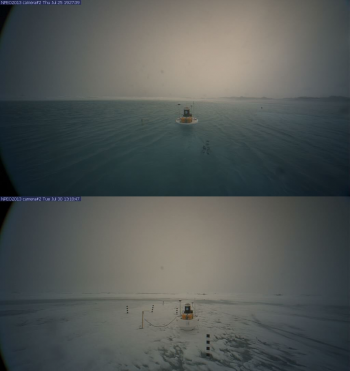 There have been confusion and misinformation on several Arctic- and climate-focused Web blogs regarding the presence of a lake at the North Pole, as viewed from the North Pole Webcam, which is part of the North Pole Environmental Observatory (NPEO). First, the webcam is not at the North Pole. Because of the drift of the ice, as of this week it is actually located at about 84 degrees North near the prime meridian. Second, the so-called lake is nothing more than a large summer melt pond atop the ice cover, and is not, as some have said, a hole or a polynya in the ice cover. While quite extensive by July 26, the pond appears to have largely disappeared by July 30, by draining off the sea perhaps through a fracture, followed by a dusting of snow. See the NPEO’s FAQ on the melt ponding this year. 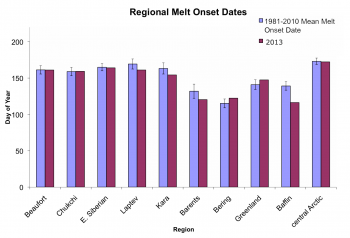 Figure 5. The graph above compares melt onset dates for sectors of the Arctic Ocean.

The same satellite passive microwave data that NSIDC uses to determine sea ice extent can also be used to determine the date of the onset of summer melt over the sea ice cover. Compared to the average over the period 1981 to 2010, the date of melt onset, as assessed for different sectors of the Arctic Ocean, was largely unremarkable. It was slightly earlier than average in some sectors but later than average in others.