Sea ice extent retreated fairly rapidly through the first two weeks of July as a high pressure cell moved into the central Arctic, bringing warmer temperatures over much of the Arctic Ocean. Ice extent remains below average on the Atlantic side of the Arctic, and is near average to locally above average in the Beaufort and Chukchi seas and along much of the Eurasian coast. 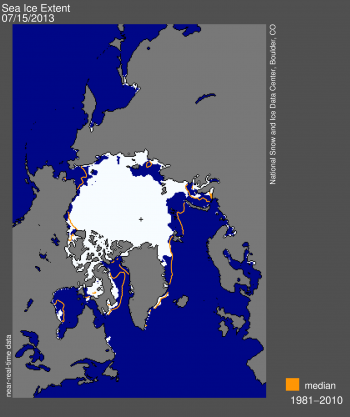 While the rate of Arctic sea ice loss is normally fastest during July, the warmest month of the year, ice loss was even faster than usual over the first two weeks of July 2013. As a result, on July 15 extent came within 540,000 square kilometers (208,000 square miles) of that seen in 2012 on the same date. The ice loss is dominated by retreat on the Atlantic side of the Arctic, including the East Greenland, Kara and Laptev seas, and Baffin Bay. In the Beaufort and Chukchi seas and much of the Eurasian coast, the ice cover remains fairly extensive, especially compared to recent summers. Compared to the 1981 to 2010 average, ice extent on July 15, 2013 was 1.06 million square kilometers (409,000 square miles) below average.

Figure 2. The graph above shows Arctic sea ice extent as of July 15, 2013, along with daily ice extent data for 2012, the record low year. 2013 is shown in blue, and 2012 in green. The gray area around the average line shows the two standard deviation range of the data. Sea Ice Index data. 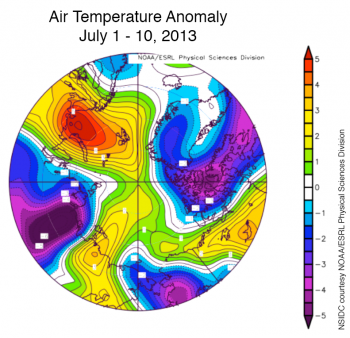 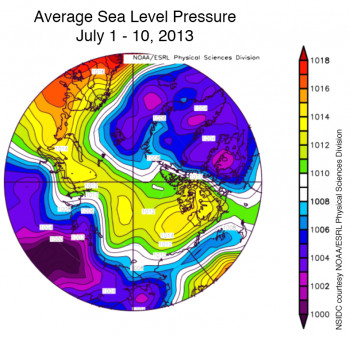 Figure 3b. This image of average sea level pressure from July 1 to 10, 2013 shows high pressure in the central Arctic.

Warmer conditions have been paired with a shift in the atmospheric circulation, with a high pressure cell at sea level pressure moving into the central Arctic, replacing then pattern of low pressure that dominated the month of June. This has helped to bring in warm air from the south over the Arctic Ocean. This pattern has also helped to create open water areas in the Laptev Sea because offshore winds push the ice away from shore. 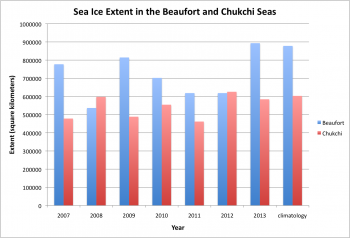 The slow retreat of sea ice in the Beaufort Sea has resulted in the most extensive ice cover seen there in the last seven summers (Figure 4). Ice extent also remains rather extensive in the Chukchi Sea, though other recent years have seen more ice at this same time of year, particularly in 2012, when Shell was forced to delay drilling operations and reduce the number of wells planned. Despite extensive ice cover, visible imagery from the Moderate Resolution Imaging Spectroradiometer (MODIS) satellite instrument shows melt is well underway.