Arctic sea ice extent maintained a steady, near-average pace of retreat through the first half of August, making it highly unlikely that a new record low minimum will be reached this year. Nevertheless, there are extensive areas of low concentration ice, even in regions close to the North Pole, atmospheric pressure and temperature patterns this summer have differed markedly from those experienced in 2012; cooler than average conditions have prevailed over much of the Arctic Ocean. By contrast, Antarctic sea ice is near a record maximum extent for mid-August. 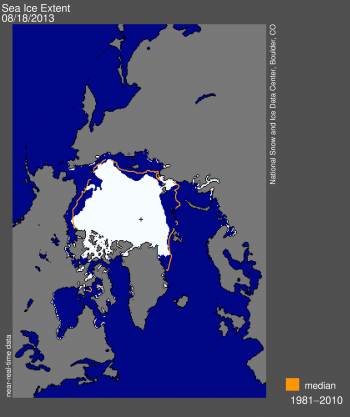 Sea ice retreat through the first half of August was near average, bringing the ice extent to 5.94 million square kilometers (2.30 million square miles). Sea ice extent continues to track well below average levels (average of 1981 to 2010), though remains within two standard deviations of the long-term mean. Retreat rates increased slightly in the western Beaufort Sea and Chukchi Sea, but ice cover remains extensive in those regions compared to 2012. Another major difference between ice extent during 2012 and this year is the much greater extent in the East Siberian Sea. Low ice extent in this region observed last year was in part attributed to the effects of the “Great Cyclone of 2012” (see previous post of August 14, 2012). On the eastern side of the Arctic near Europe and Greenland, the extent remains below average. 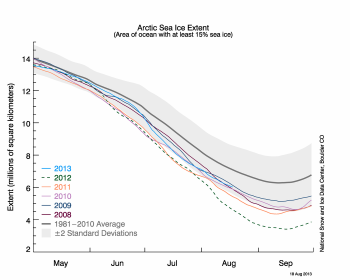 The sea ice retreat rate averaged from August 1 to 18 was near average at approximately 75,000 square kilometers (29,000 square miles) per day. However, satellite data show extensive low-concentration areas within the ice cover, which appear to have developed in response to the frequent passage of storm systems. These weather patterns also result in lower-than-average air temperatures over the Arctic. Temperatures in the central Arctic at the 925 hPa level have been 2 to 4 degrees Celsius (4 to 7 degrees Fahrenheit) below average since late July.

A bit thin on top 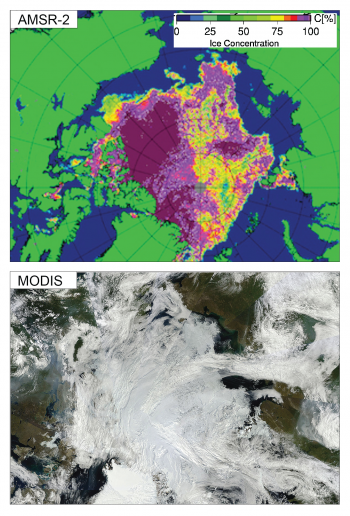 Figure 3. This composite shows an AMSR-2 sea ice concentration map (top) and a MODIS true-color composite image (bottom) of the Arctic for August 14, 2013. Clouds in the MODIS scene obscure some of the ice edges seen in the AMSR-2 data set.

Satellite data from the AMSR-2 instrument and MODIS show an unusually large expanse of low-concentration sea ice (20 to 80% cover) within our extent outline (15% or greater, using the SSM/I sensor) spanning much of the Russian side of the Arctic and extending to within a few degrees of the North Pole. A small area north of the Kara Sea has concentrations below 30%. This is likely in part a result of the dispersive effect of low-pressure systems that have migrated across the central Arctic over the past month. While some of the low concentrations recorded by AMSR-2 may be due to surface melt on sea ice, the MODIS image confirms that a large region is covered by isolated floes. The tendency towards a more open pack, with large areas of open water between ice floes, has increased in the past decade as the ice cover has thinned, as well as a tendency for formation of large polynyas (see ASINA posts for September 2006) and areas of pack detached from the main Arctic ice cover (such as mid-August 2012). The University of Washington’s Pan-Arctic Ice Ocean Modeling and Assimilation System (PIOMAS) model and other models of ice thickness continue to indicate thin ice cover this summer. 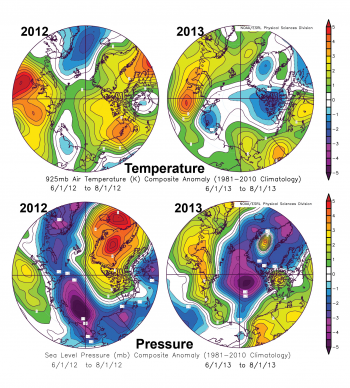 A comparison of average temperature and sea level pressure maps for June and July of 2012 (left diagrams) and 2013 (right diagrams) help us to understand why ice extent is higher in 2013. The pattern of unusually low pressure centered near the pole in 2013 has helped to spread the ice out and is consistent with generally cool conditions over much of the Arctic Ocean, inhibiting melt. By contrast, in the summer of 2012, a broad region of unusually high pressure centered over Greenland, in combination with below average pressure centered over the East Siberian and Chukchi seas, led to winds over the Beaufort Sea with a more southerly component than is usually the case, leading to warm conditions. That high pressure last year over Greenland also contributed to a record melt season for the Greenland ice sheet. Melt this year over the ice sheet has been more moderate, though still above rates seen in the 1990s. See our upcoming Greenland Today site post later this week.

Can’t get there from here 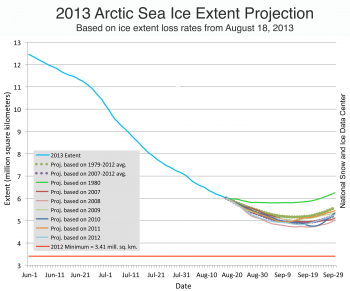 Figure 5. The graph above shows projections of ice extent from August 1 through September 30 based on observed retreat rates appended to the August 18, 2013 ice extent. None of the observed patterns of the past few years, or the mean loss rates, bring the ice extent below 4.0 million square kilometers (1.56 million square miles). Sea Ice Index data.

Projections of the likely minimum extent this year based on retreat rates from past years argue that it is highly unlikely that sea ice will surpass the record-setting low extent seen in 2012. With retreat rates similar to those of 2007 to 2012, the minimum extent would be near 5.0 million square kilometers (2.0 million square miles) in mid-September.

Record extent in the Antarctic 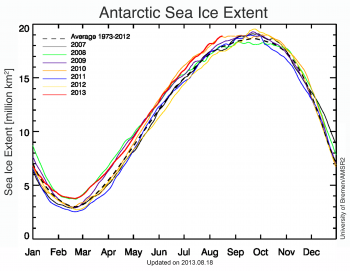 Antarctic sea ice extent for August 19 is 18.70 million square kilometers (7.22 million square miles), a record or near-record high level (August 19, 2010 was similarly high), led by unusually extensive ice in the Bellingshausen, Amundsen, and Ross seas, and in the western Indian Ocean sector. Climate conditions since June have been variable, but the most recent surge in ice growth has occurred during a period of unusually high pressure over the center of the continent, resulting in a slowing of the circumpolar winds, warm winter conditions for the central ice sheet areas (Vostok Station and Amundsen-Scott South Pole Station both had periods of spring-like -30s earlier in the month), and cold conditions in the Bellingshausen, allowing ice to grow extensively there.