Although ice extent appeared to reach a minimum on September 10, rising afterwards for three straight days, it has subsequently declined even further. NSIDC scientists are closely monitoring the ice extent and will provide another update on the data, as conditions develop.

Our season-end announcement in October will provide the final numbers for the minimum extent, as well as the monthly data for September, which scientists use for establishing long-term trends.

Arctic sea ice appears to have reached its annual minimum extent on 10 September. The minimum ice extent was the third-lowest in the satellite record, after 2007 and 2008, and continues the trend of decreasing summer sea ice. 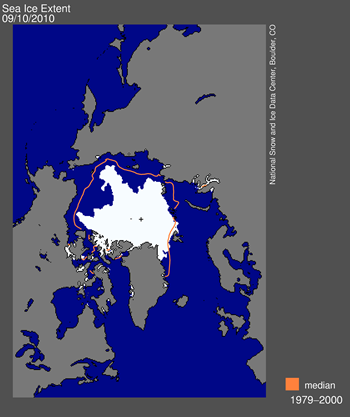 On September 10, 2010 sea ice extent dropped to 4.76 million square kilometers (1.84 million square miles). This appears to have been the lowest extent of the year; sea ice has now begun its annual cycle of growth. 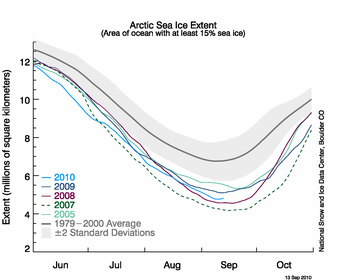 Despite a late start to the melt season, the ice extent declined rapidly thereafter, with record daily average ice loss rates for the Arctic as a whole for May and June. Assuming that we have indeed reached the seasonal minimum extent, 2010 would have the shortest melt season in the satellite record, spanning 163 days between the seasonal maximum and minimum ice extents. 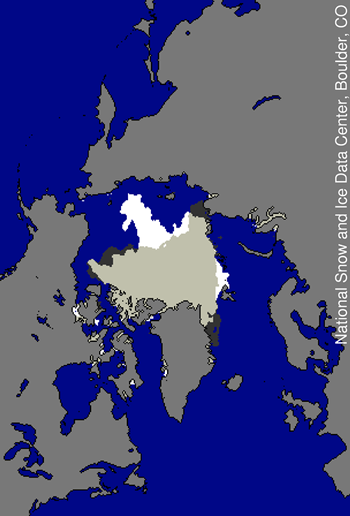 Figure 3. This image compares differences in ice-covered areas between September 10, 2010, the date of this year’s minimum, and September 16, 2007, the record low minimum extent. Light gray shading indicates the region where ice occurred in both 2007 and 2010, while white and dark gray areas show ice cover unique to 2010 and to 2007, respectively. Sea Ice Index data. About the data. —Credit: National Snow and Ice Data Center
High-resolution image

At the 2010 seasonal minimum, ice remained fairly extensive in the East Siberian Sea, compared to 2007, when this area was ice free. 2010 ended up having less ice than 2007 in the Beaufort Sea and in the East Greenland Sea. Both the Northwest Passage and Northern Sea Route (along the shores of Eurasia) were open at the 2010 sea ice minimum, whereas in 2007, ice blocked part of the Northern Sea Route. 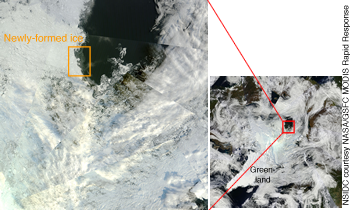 Visible imagery from the NASA Moderate Resolution Imaging Spectroradiometer (MODIS) confirms that freeze-up is starting in some parts of the Arctic. Growth of new ice is visible in the image from September 14, 2010 extending off the remaining ice pack in the northwestern part of the East Siberian Sea. The new ice formed within the past couple days. Extent may still be declining in other regions, primarily due to heat from ocean waters.

Because of the variability of sea ice at this time of year, the National Snow and Ice Data Center determines the minimum using a five-day running mean value. We have now seen four days of gains in extent. It is still possible that ice extent could fall slightly, because of either further melting or a contraction in the area of the pack due to the motion of the ice. For example, in 2005, the time series began to level out in early September, prompting speculation that we had reached the minimum. However, the sea ice contracted later in the season, again reducing sea ice extent and causing a further drop in the absolute minimum. When all the data for September are in, we will confirm the minimum ice extent for the season.