The Northwest Passage and the Northern Sea Route are largely free of ice, allowing the potential for a circumnavigation of the Arctic Ocean. At least two expeditions are attempting this feat, the Norwegian explorer Borge Ousland and the Peter I yacht from Russia. 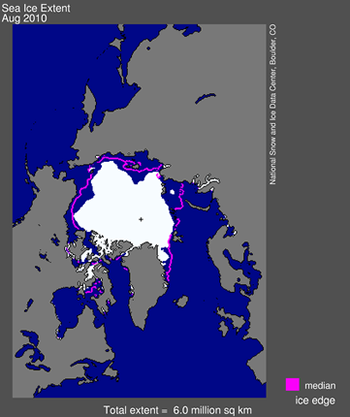 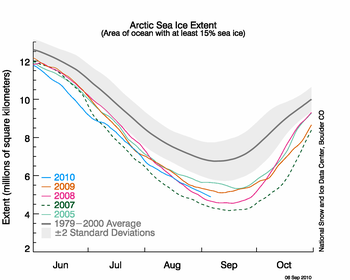 At the end of August, ice extent had fallen to the fourth lowest in the satellite record, behind the seasonal minima recorded for 2007, 2008, and 2009. On September 3, ice extent fell below the seasonal minimum for 2009 to claim third lowest on record, with perhaps one to two weeks left in the melt season. 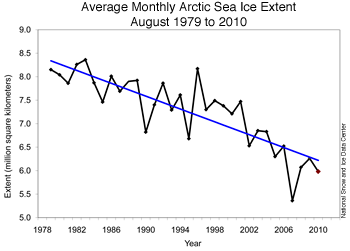 August 2010 compared to past years

Ice extent for August 2010 was the second lowest in the satellite record for the month. The linear rate of decline of August ice extent over the period 1979 to 2010 is now 8.9% per decade. 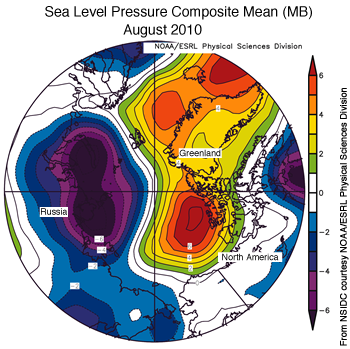 Figure 4. This map of sea level pressure for August 2010 shows a return of the dipole anomaly, which was present in June but not in July.—Credit: NSIDC courtesy NOAA/ESRL PSD
High-resolution image

Return of the dipole anomaly

In August, a pattern of higher than average pressure over the northern Beaufort Sea and lower than average pressure over the Siberian side of the Arctic replaced the stormy and cool weather conditions that persisted through July. This atmospheric pattern, known as the dipole anomaly, brought relatively warm southerly winds into the Beaufort and Chukchi seas, where air temperatures were 1 to 3 degrees Celsius (1.8 to 5.4 degrees Fahrenheit) above normal for the month of August. The warmth enhanced melt in the region, and southerly winds contributed to ice loss by pushing the ice edge northward. This pattern is similar to the pattern at the end of the 2007 melt season, but not as pronounced. Air temperatures this August were also 1 to 3 degrees Celsius (1.8 to 5.4 degrees Fahrenheit) below normal over the Barents and Kara Seas. 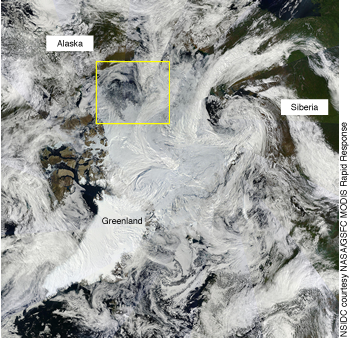 Rotten ice in the Beaufort and Chukchi seas 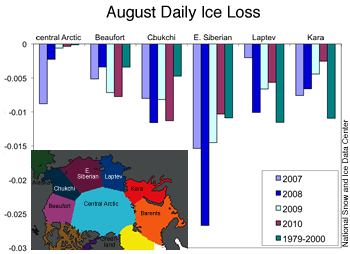 The rate of ice loss in the summer varies from region to region depending on local air and ocean temperatures and wind patterns. This August, the decline in ice extent was unusually fast in the Beaufort and Chukchi Sea, likely because of the rotten ice that melted out completely. In addition, southerly winds linked to the dipole anomaly pattern brought warmer air into the region and helped push the ice edge northward.

However, the loss rate in the East Siberian Sea and the Central Arctic was slower than any of the past three years, and was also fairly slow (slower than the 1979 to 2000 average rate) in the Laptev and Kara Seas. The reason for slow ice loss in the Kara Sea, however, is that there was already very little ice in that region at the beginning of August. Such year-to-year variations demonstrate the importance of weather conditions in determining regional ice loss.