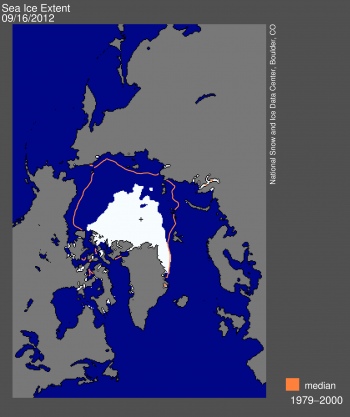 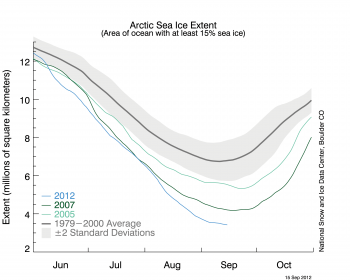 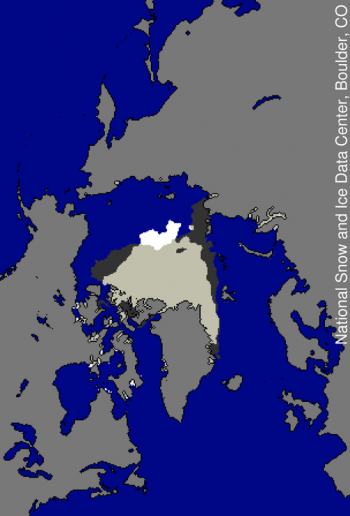 On September 17, Arctic sea ice extent was 3.41 million square kilometers. Within the next couple of days, we expect to announce that the minimum extent has been reached for the year. 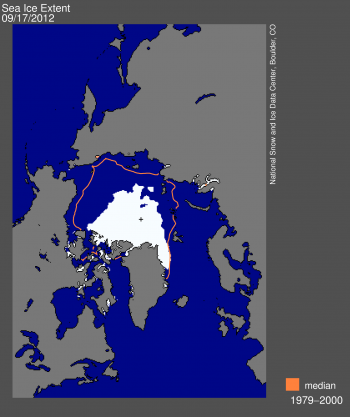 Sea ice extent for September 17 was 3.41 million square kilometers (1.32 million square miles). Weather conditions near the ice edge heavily influence the timing of the minimum, which has occurred as late as September 23. We are now five days past the 1979 to 2000 average minimum date of September 13. The decline has slowed in recent days and the minimum will likely be confirmed any day now.

The current extent is 760,000 square kilometers (293,000 square miles) below the previous record minimum extent in the satellite record (4.17 million square kilometers or 1.61 million square miles) which occurred on September 18, 2007. This difference is larger than the size of the state of Texas. The ice extent currently tracks nearly 50% below the 1979 to 2000 average minimum extent. 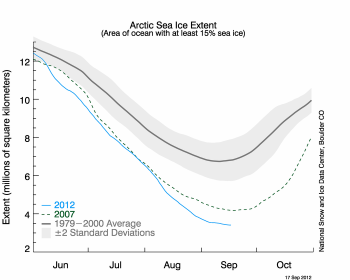 Figure 2. The graph above shows Arctic sea ice extent as of September 17, 2012, along with daily ice extent data for 2007. 2012 is shown in blue and 2007 in green. The gray area around the average line shows the two standard deviation range of the data. Sea Ice Index data.

Since September 1, extent declined 316,000 square kilometers (122,000 square miles), or 19,800 square kilometers (7,600 square miles) per day. Freeze up has begun over the high latitude Arctic areas, such as the North Pole, and extent has started to increase in the Beaufort Sea region. However, extent is still decreasing on the Atlantic side of the Arctic, leading to the continued overall decline in recent days. The Northern Sea Route along the coast of Siberia has been largely free of ice since mid August. This is in contrast with 2007, when a persistent tongue of ice reaching the coast of the Laptev Sea clogged the Northern Sea Route. 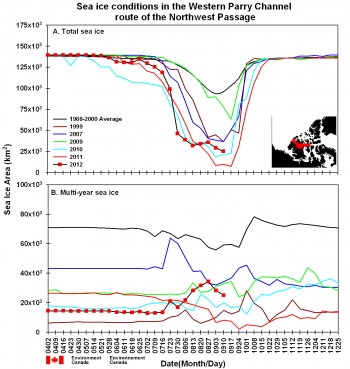 The situation in the Northwest Passage this year also contrasts with 2007. Both the narrow and shallow southern route used by the late polar explorer Roald Amundsen and the wide and deep northern route through the Parry Channel opened in 2007. This year only the southern route has opened. According to Stephen Howell of the Canadian Ice Service, rapid ice loss occurred in the Parry Channel in July. However, due in part to the August storm, a subsequent influx of multiyear ice from the north has kept at least some of the channel blocked.

These different patterns of ice loss in the sea routes between 2007 and 2012 highlight how a focus on overall total extent can overshadow regional aspects that have important implications. That 2007 was a record low extent at the time meant nothing to a ship trying to traverse the Northern Sea Route; likewise, the new record this year was meaningless to a ship trying to navigate through the Parry Channel.

Conditions in the Chukchi Sea, where Shell has started to drill for oil, provide another example. Shell’s operations were delayed in part because of greater than expected ice cover in the early summer. In the late summer, although passive microwave data showed that the Chukchi Sea was nearly ice-free, small floes of ice threatened Shell’s drilling platform, forcing the company to temporarily cease operations in the Arctic. 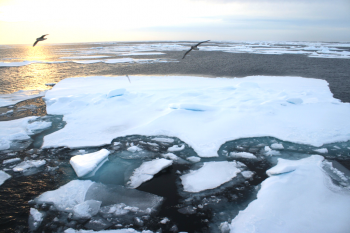 NSIDC scientist Julienne Stroeve has been traveling in the Arctic by ship, taking sea ice and temperature measurements on the Atlantic side of the Arctic Ocean. Her reports also show the regional variability of the ice cover. She reached the ice edge on September 10 at roughly 82 degrees North latitude, 15 degrees East longitude (essentially due north of Svalbard). Concentrations were quite high (around 90%) at the ice edge, but as the ship cruised north, concentration dropped to about 40% with considerable regions of open water.

Since entering the ice, Stroeve has encountered an average of up to 65% ice concentration primarily consisting of small floes (20 to 50 meters, or 66 to 164 feet) of mostly first-year ice. These floes are too small and thin to safely embark on to take measurements. However, the ship eventually found larger floes and Stroeve took ice thickness measurements indicating thicknessess of around 2 meters (6.5 feet). So far, air temperatures have remained above freezing and Stroeve has not observed any ice formation. The surface measurements taken by Stroeve and other scientists on board the ship are useful for validating satellite data and will provide more detail on the state of the sea ice cover. Stroeve sighted several polar bears, including a mother and her cub. 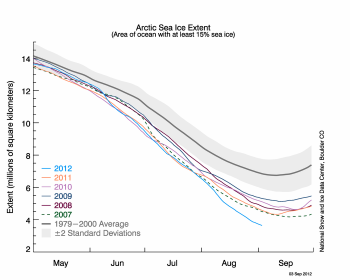 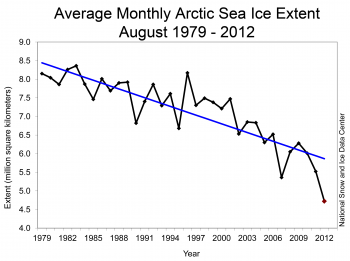 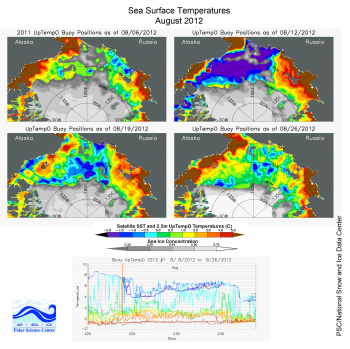 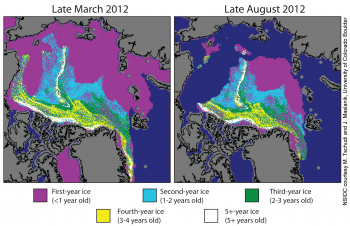