On September 18, Arctic sea ice reached its likely minimum extent for 2019. The minimum ice extent was effectively tied for second lowest in the satellite record, along with 2007 and 2016, reinforcing the long-term downward trend in Arctic ice extent. Sea ice extent will now begin its seasonal increase through autumn and winter. 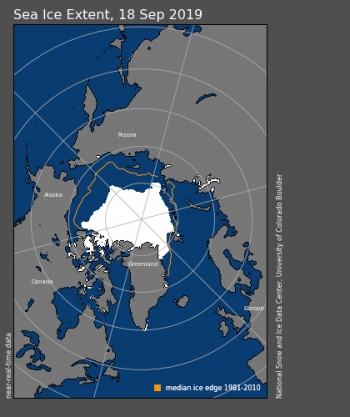 On September 18, 2019, sea ice extent dropped to 4.15 million square kilometers (1.60 million square miles), effectively tied for the second lowest minimum in the satellite record along with 2007 and 2016. This appears to be the lowest extent of the year. In response to the setting sun and falling temperatures, ice extent will begin increasing through autumn and winter. However, a shift in wind patterns or a period of late season melt could still push the ice extent lower.

This year’s minimum extent was effectively tied with 2007 and 2016 for second lowest, only behind 2012, which is the record minimum. The 13 lowest extents in the satellite era have all occurred in the last 13 years. 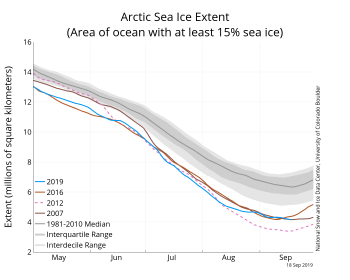 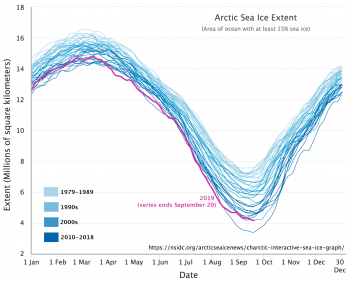 Figure 2b. This graph shows Arctic sea ice decline per decade, and includes the 2019 sea ice decline trajectory. The color scheme moves from lightest to darkest blue, from 1979 to 1989 and 2010 to 2018, respectively. 2019 is shown in magenta. This graphic is based on the Charctic Interactive Sea Ice Graph.