After declining rapidly through July, sea ice extent decline slowed during the first two weeks of August. A new record September minimum is highly unlikely. Our 2018 projection for the sea ice minimum extent falls between the fourth and ninth lowest in the 39-year satellite record. Two NSIDC scientists are studying ice and ocean conditions in the western Arctic aboard an icebreaker. 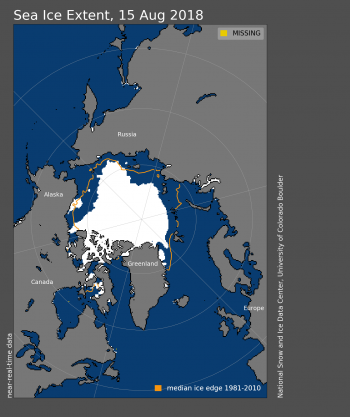 As of August 15, Arctic sea ice extent was 5.7 million square kilometers (2.2 million square miles). This is 1.58 million square kilometers (610,000 square miles) below the 1981 to 2010 average, but 868,000 square kilometers (335,000 square miles) above the record low at this time of year recorded in 2012. Ice retreated recently in the Kara, Laptev, and Beaufort Seas. The ice edge was relatively unchanged near Greenland and Svalbard, and in the East Siberian Sea. Much of the Northwest Passage through Canada remains choked with ice. The Northern Sea Route appears open, according to the Multisensor Analyzed Sea Ice Extent (MASIE) analysis, though ice is lingering near the coast in the East Siberian Sea. Scattered ice floes are likely present along the route. A large patch of sea ice, separated from the main pack, persists in the southern Beaufort Sea. Such patterns of ragged patchiness or large polynyas have been a more frequent feature of Arctic summers since 2006. 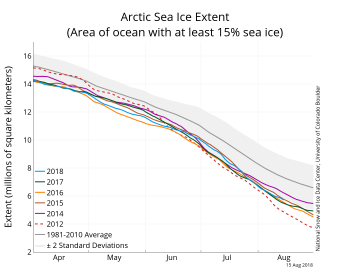 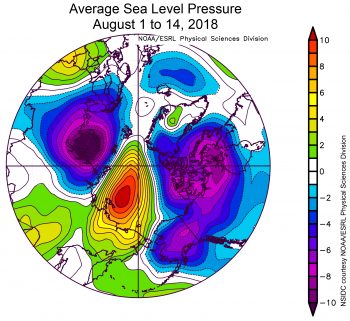 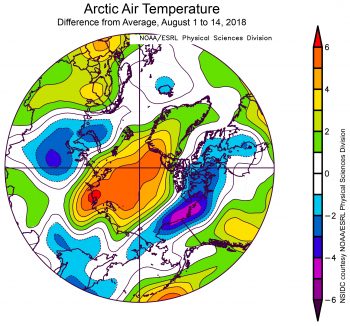 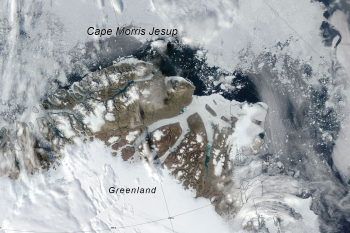 Figure 2d. This shows a true color composite image of Cape Morris Jesup off of northern Greenland, taken by the Moderate Resolution Imaging Spectroradiometer (MODIS) sensor on the NASA Terra satellite on August 13, 2018.

Through the first two weeks of August, ice extent declined at approximately 65,000 square kilometers (25,100 square miles) per day, slightly faster than the 1981 to 2010 average of 57,000 square kilometers (22,000 square miles) per day. Sea level pressure was above average over the central Arctic Ocean, a change from last month, flanked by areas of below-average pressure in the Kara Sea and northern Canada (Figure 2b). Temperatures at 925 hPa (about 2,500 feet altitude) were generally 1 to 5 degrees Celsius (2 to 9 degrees Fahrenheit) above average over much of the Arctic Ocean for this period, with the area just north of Greenland reaching 5 to 7 degrees Celsius (9 to 13 degrees Fahrenheit) above average (Figure 2c). Below average air temperatures persisted over the Kara Sea, 1 to 3 degrees Celsius (2 to 5 degrees Fahrenheit), and the Beaufort Sea, 1 to 5 degrees Celsius (2 to 9 degrees Fahrenheit). Another feature of note is the region of open water (Figure 2d) along the north coast of Greenland, around Cape Morris Jesup, which is visible on August 13 in Moderate Resolution Imaging Spectroradiometer (MODIS) Terra true color imagery from NASA WorldView. The region normally consists of thick, consolidated ice from a general pattern of on-shore ice motion. Even when winds blow offshore, the strength of the thick ice would hold in place along the coast. However, current ice conditions appear more broken up and likely thinner, and over the past couple of weeks, offshore winds have succeeded in pushing ice off of the coast. 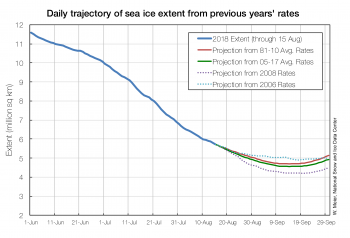 Sea ice up close and personal 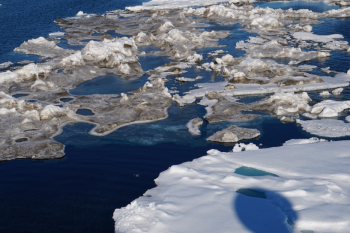 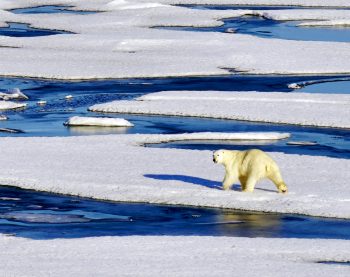 Figure 4b. The team’s first sighting of a polar bear.

Two NSIDC scientists are currently aboard the Korean icebreaker Araon as it travels through the Chukchi Sea. NSIDC scientist Julienne Stroeve wants to better understand how changes in the sea ice regime (e.g. ice thickness, snow depth, date of melt onset) influence the availability of sunlight under the ice, which plays a key role in phytoplankton blooms and grazing habits of zooplankton. Another objective is to quantify how layering of salty and fresh water in melt ponds evolves over time. To meet these objectives, the researchers will deploy several instrumented to measure seasonal snow accumulation, salinity, and temperature within selected salty and fresh melt ponds. A bio-optical buoy will measure the light and oxygen below the ice, and other buoys will measure the ice growth and melting on different types of ice floes.

As the icebreaker travels through the Arctic Ocean, NSIDC scientist Alia Khan is measuring the amount of sunlight that reaches the ice surface to assess the accuracy of incoming solar energy from weather models. Additionally, she is collecting atmospheric aerosol particles, such as smoke and dust, to measure their size distribution. On the ice, she will collect spectral reflectance measurements (reflectance of the surface in different solar energy wavelengths) of different ice types, such as thin first-year versus thick multiyear ice, snow-covered versus bare ice, and melt ponds. Lastly, she will collect snow and ice samples for analysis of black carbon and algal biomass. Black carbon comes from the incomplete combustion of biomass and fossil fuels. When the dark particles are deposited on snow and ice surfaces, the darker surface absorbs more solar radiation than the surrounding, lighter surface, reducing reflectance of solar energy and enhancing melt. The pigment of ice algae has a similar impact. Collecting these data will help scientists better understand the effects of ship traffic and long-range atmospheric transport that deposit black carbon on the sea ice.

The team left Nome, Alaska, on August 4, and is currently traveling eastwards between 74 and 75 degrees N and 167 degrees W. Before reaching the ice camp where the instruments will be deployed, the ship is retrieving and installing moorings. Ice conditions have been varied since the first sightings of sea ice occurred at 72 degrees 58 minutes N/168 degrees 18.2 minutes W. The first ice sighted mostly consisted of small multiyear ice remnants about 1 meter thick (3.3 feet) and less than 20 meters (66 feet) in size. Now the majority of the ice floes are thin, first-year ice floes between 50 to 200 meters (164 to 656 feet) in size, and 50 to 100 centimeters (1.6 to 3.3 feet) thick. While most of the ice is level ice, some large ridging has been observed. Almost all the ice floes have melt ponds, some discrete and some linked, especially on the thinner first-year ice. Most melt ponds have thaw holes. So far, the majority of melt ponds have a thin top ice layer as air temperatures are hovering around -3 degrees Celsius (27 degrees Fahrenheit). However, once the ship reached 179 degrees W, air temperatures approached 0 degrees Celsius (32 degrees Fahrenheit) and the melt ponds thawed. The most interesting feature thus far has been dirty ice in the midst of bright white ice (see Figure 4a). It is unclear if these dirty ice floes are a result of ice algae, dust, or soot deposits from this summer’s forest fires. The team has also been rewarded with sightings of polar bears (see Figure 4b).