Arctic sea ice extent declined at a slightly slower-than average pace in June. Despite the slow loss, warm conditions and winds from the south developed a large area of open water in the Laptev Sea. 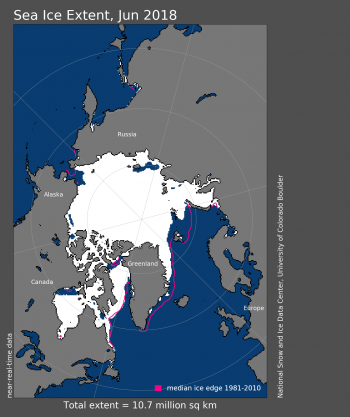 Extent at the end of June remained below average in the Chukchi Sea, but because of slow retreat through June in the region, extent in the Chukchi is now closer to average than was the case at the end of May. The Barents Sea and East Siberian Sea also have extents well below average at the end of June. Most of the ice in the Sea of Okhotsk has melted. Ice has been retreating in the west side of Hudson Bay where extent is below average. However, this is countered by above average extent in the eastern side of the bay. Notably, a large area of open water has developed in the Laptev Sea, leading to record low extents in that region during the first half of June. 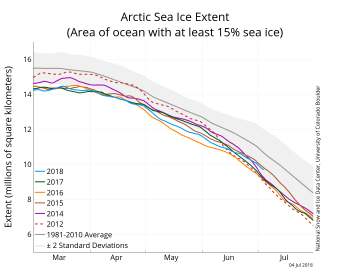 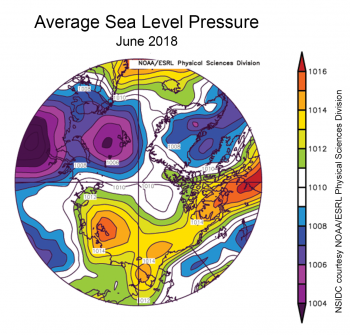 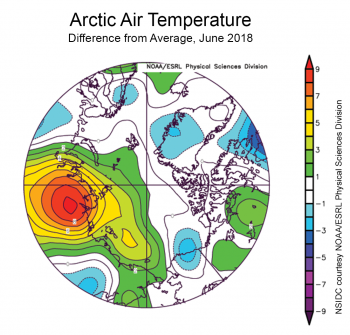 The temperature pattern is consistent with the early development of open water in the Laptev Sea. Extents in this area oscillated between slightly above and below the record low extent set in June 2014. Parts of the Laptev Sea opened as early as mid-April, likely due to winds transporting ice away from the fast ice zone (ice that is locked to the shoreline). While new ice formed in these open water areas, this ice was thin and prone to melting out once the summer melt season started.

Also of note was the passage of a strong cyclone in early June. This system moved into the Kara Sea on June 6, and reached a minimum central pressure of less than 970 hPa on June 7. By June 10, it had migrated into the Beaufort Sea. It dissipated on June 13. 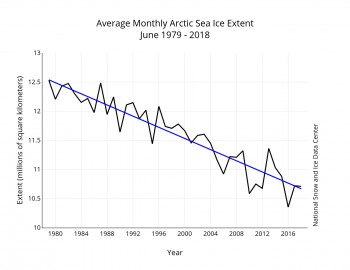 New insights into warming in the northern Barents Sea

An interesting feature of recent years is a region of unusually high winter air temperatures, or a winter hotspot, over the northern Barents Sea. Previous studies have provided evidence linking the hotspot to a halocline retreat, which is a retreat or weakening of the cold, fresh waters at the ocean surface that prevent ocean heat imported from the Atlantic from mixing upwards. A new paper by Lind et al. (2018) argues that the hotspot is driven by the lack of sea ice transport. Sea ice is mostly fresh water (low salinity) and less is being transported into that region. Hence the ocean surface becomes less fresh over the northern Barents Sea, allowing the warm Atlantic water to mix upwards. 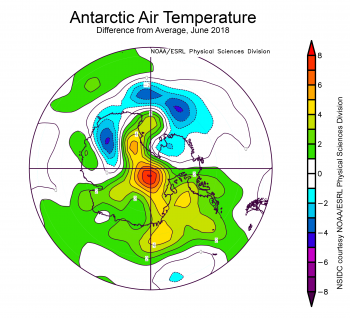 Sea ice expanded at a faster-than-average pace in June in the Southern Hemisphere, bringing Antarctic sea ice extent closer to typical ice extents for this time of year. This follows on the heels of a period of below-average ice extent since austral winter in 2016. Sea ice extent is near average in all sectors except the northeastern Weddell Sea, and a small area in the northern Davis Sea. Higher-than-average air temperatures prevailed in these regions, and cool conditions prevailed over the northern Ross Sea.

A new study in the Journal Nature found that reduced sea ice in the northwestern Weddell Sea and southern Bellingshausen Sea likely contributed to the weakening of major ice shelves prior to their disintegration in the 1990s and early 2000s. Loss of the sea ice buffer near Antarctica’s coast allows long-period ocean swell to flex ice shelves. Under ordinary conditions, this flexing has little effect. However, if the ice shelves have been pre-conditioned by seasonal melt-water flooding, the flexing by wave action in late summer can have a devastating effect. Minor flexure of the ice shelf plate allows water to infiltrate existing cracks and initiate fracturing of the ice.

Four major ice shelf break-up events in 1995 (Larsen A), 2002 (Larsen B), and 2008 and 2009 (Wilkins) all occurred after multiple weeks where no sea ice was present near the ice shelf fronts to dampen ocean swell. In the case of the Larsen A and B events, the loss of the ice shelves initiated a significant acceleration of the tributary glaciers. The study demonstrates that sea ice—a component of the cryosphere that is very sensitive to changing climate and ocean—has an important protective effect on the Antarctic ice sheet.