The sun has set over the central Arctic Ocean and Arctic sea ice extent is now increasing. Sea ice extent in Antarctica appears to have passed its seasonal maximum. The peak Antarctic value recorded so far of over 20 million square kilometers (7.7 million square miles) sets a new record over the period of satellite observations. 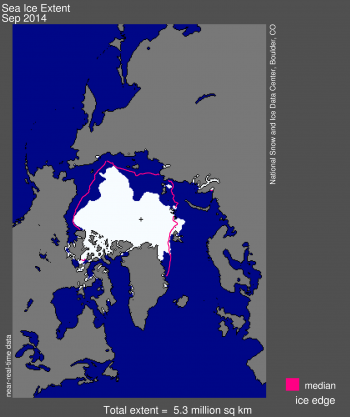 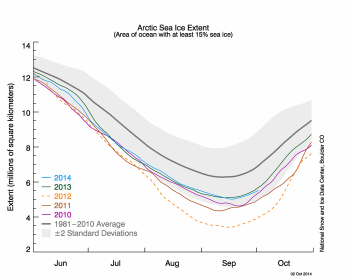 Because ice extent falls through the first part of September and rises in the latter part, statistics on the average daily rate of ice loss or gain through the month are largely meaningless. More relevant is the total ice loss through the melt season. Between the seasonal maximum extent that occurred on March 21, 2014 and the September 17 minimum, the Arctic Ocean lost a total of 9.89 million square kilometers (3.82 million square miles) of ice, which is the 9th largest in the satellite record, but the least amount of seasonal loss since 2006. This year’s loss was 1.92 million square kilometers 741,000 square miles) less than the total loss that occurred in 2012. 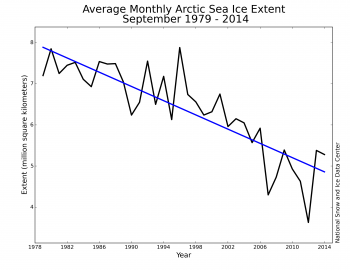 Weather conditions prevailing over the summer of 2014 were unremarkable. Compared to the long term (1981 to 2010) climatology, sea level pressure over the period June through August was higher than average over much of the central Arctic Ocean, the Atlantic sector of the Arctic, and Greenland. While air temperatures at the 925 hPa level (approximately 3000 feet altitude) were slightly above average over part of the central Arctic Ocean, they were below average over the Kara Sea and just north of Alaska. The summer of 2013, which is now the 7th lowest ice extent in the satellite record, was also generally unremarkable in terms of temperature. Both of these years contrast sharply with 2012, which saw unusually warm conditions across the Arctic Ocean. The one significant weather pattern over the summer was a larger than normal pressure gradient over the Laptev Sea that drove southerly winds, brought warmer air, and helped drive sea ice northward. This led to the tongue of open water that reached to within 5 degrees latitude of the pole. However, this pressure gradient was not particularly extreme so thinner ice cover in the area was also a significant contributor to the open water near the pole. Sea surface temperatures may also have played a role, as we discussed in a previous post.

The distribution of sea ice age at the time of the minimum provides some insights into the summer evolution of the ice cover. For ice that is three years and older, the distribution is similar to recent years, with most of this ice along the northern coast of Greenland and northwestern coast of the Canadian Archipelago. Through the winter, older ice moved across the Beaufort and Chukchi seas due to the typical clockwise circulation of the Beaufort Gyre. Similar to recent summers, much of this ice melted away, though this year it lasted through most of the summer, contributing to the relatively late development of open water along the Alaskan coast.

One notable feature this year compared to last year is that a tongue of second-year ice (ice that is 1 to 2 years old) persisted north and east of the East Siberian Sea. This likely helped limit the loss of ice in this region and kept the ice edge much farther southward than in the neighboring Laptev Sea to the east. The predominance of thinner first-year ice in the Laptev region, along with persistent southerly winds, led to seasonal retreat of the ice edge to north of 85 degrees North latitude. 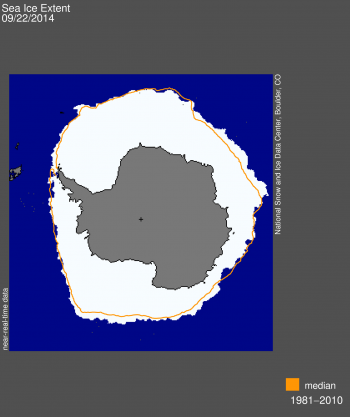 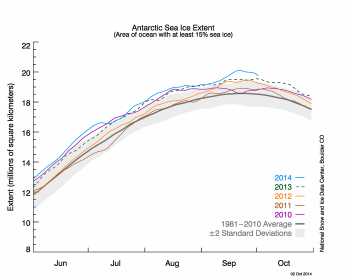 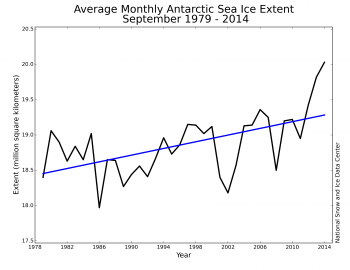 As we reported in our Arctic minimum announcement, sea ice in Antarctica has remained at satellite-era record high daily levels for most of 2014. On September 22, 2014, Antarctic ice extent increased to 20.11 million square kilometers (7.76 million square miles). This was the likely maximum extent for the year.

A comparison of ice extent (Figure 6a) with ice concentration trends (Figure 7) illustrates that the areas of unusual ice growth are in the same places that have been showing ongoing trends of increased ice extent. This suggests that wind patterns play a significant role in the recent rapid growth in Antarctic ice extent. However, another possible reason is that recent ice sheet melt, caused by warmer, deep ocean water reaching the coastline and melting deeper ice, is making the surface water slightly less dense. While the change in saltiness is too small to significantly affect the freezing temperature, the increase in slightly less dense water surrounding Antarctica inhibits mixing, creating conditions that favor ice growth (as we discussed in our July 17 post).

Figure 8a. This image series shows Antarctic sea ice concentration from September 1 to September 30, 2014. Click on the image to view the animated image series. Data are from the AMSR2 satellite instrument.

The period between September 10 and September 22 saw very rapid late-season ice growth in Antarctica, pushing the total sea ice extent upward by nearly 60,000 square kilometers per day (23,000 square miles). An animation of Antarctic sea ice concentrations from AMSR2 satellite data shows that a pulse of increased sea ice growth in several areas, but especially in the northern Weddell Sea, was the cause of the rapid rise in extent. A look at the weather for mid-September in the south indicates that a band of southerly winds swept from west to east across the northern Weddell Sea, favoring both ice growth and ice advection to the north.

For the mid-winter period, climate patterns for 2014 evolved in a similar way to 2013, as discussed in previous posts and in a paper led by our colleague, Phillip Reid. Sea ice growth in the Ross, Amundsen, and Bellingshausen seas for the austral winter of 2014 was favored by moderately strong low pressure anomalies in the Amundsen Sea, the northern Weddell Sea, and the central Indian Ocean region in mid-winter (late July and August). But at the period of the sea ice maximum, higher pressures over the continent reduced the intensity of westerly winds, and resulted in cooler southerly winds over the Weddell Sea and the Amundsen Sea. This helped to create the very large ice extent values seen in September. The Antarctic sea ice maximum period, as described above, had a further push from southerly winds over the far southern Atlantic (northernmost Weddell Sea) and Indian Ocean regions.

Last year, a vessel became trapped in ice south of Australia in an incident that highlighted the need for better local ice forecasts. The International Ice Charting Working Group will meet later this month in Punta Arenas, Chile. Members will work on improving the collective capability of ice services to provide ice information in the interests of marine safety.