In the Antarctic, sea ice extent has hit record lows through most of the growth season. Starting in early August, sea ice began expanding rapidly, exemplifying the strong degree of variability in Southern Hemisphere sea ice. As such it is too early to assume that the maximum has been reached as storms may still expand or compact the extended ice edge. The maximum for Antarctic sea ice typically occurs in late September or early October. 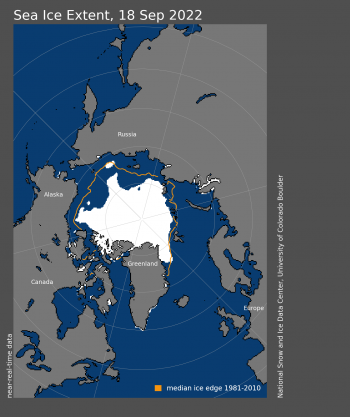 On September 18, sea ice reached its annual minimum extent of 4.67 million square kilometers (1.80 million square miles) (Figure 1), tying for tenth lowest with 2018 and 2017. In response to the setting sun and falling temperatures, ice extent has begun expanding and will continue through autumn and winter. However, a shift in wind patterns or a period of late season melt could still push the ice extent lower. 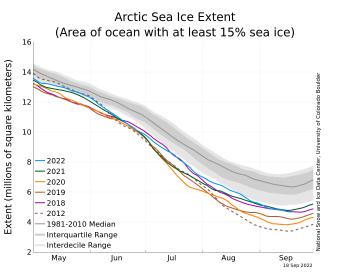 In the 44-year-satellite record, 16 of the lowest minimums have all occurred in the last 16 years.

The overall, downward trend in the minimum extent from 1979 to 2022 is 12.6 percent per decade relative to the 1981 to 2010 average. The loss of sea ice is about 78,500 square kilometers (30,300 square miles) per year, equivalent to losing the size of the state of South Carolina or the country of Austria annually.