Contrasting with the fairly slow start to the melt season in May, June saw the ice retreat at a faster than average rate. On July 2, Arctic sea ice extent was at the same level recorded in 2012 and 2016. In 2012, September sea ice extent reached the lowest in the satellite record. As a new feature to Arctic Sea Ice News and Analysis, NSIDC now provides a daily updated map of ice concentration in addition to the daily map of ice extent. 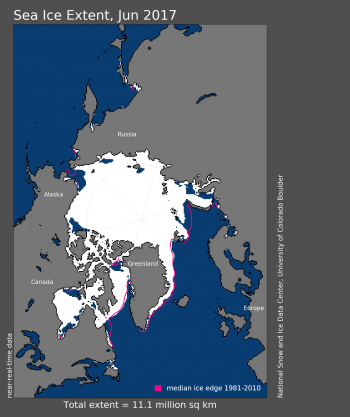 Continuing the pattern seen in May, sea ice extent at the end of the month remained below average in the Chukchi Sea and in the Barents Sea. Ice extent was at average levels in the Greenland Sea. Areas of low concentration ice have developed along the ice edge and coastal seas.

Based on imagery from the Moderate Resolution Imaging Spectroradiometer (MODIS) aboard the NASA Terra and Aqua satellites, summer melt ponds atop the ice cover were somewhat slow to develop. However, there is now widespread melt pond coverage in the Canadian Archipelago and the Laptev and East Siberian Seas. Data from the Advanced Microwave Scanning Radiometer 2 (AMSR-2) instrument analyzed by the University of Bremen, as well as MODIS imagery, indicate that melt ponds have also developed over the Central Arctic Ocean. Researchers in Dease Strait in Northern Canada have observed melt ponds forming about two weeks earlier than average. Melt ponds are important as they decrease the albedo or reflectivity of the ice surface, which hastens further melt. 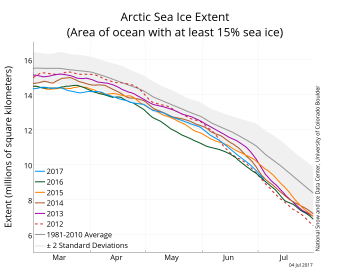 June air temperatures were modestly above average (1 to 3 degrees Celsius or 2 to 5 degrees Fahrenheit) in a band spanning the Arctic Ocean roughly centered along the date line and the prime meridian. This contrasts with below-average temperatures over the eastern Beaufort Sea and Canadian Arctic Archipelago and the Barents and Laptev Seas (1 to 3 degrees Celsius, 2 to 5 degrees Fahrenheit). Atmospheric pressures at sea level were below-average over the Kara Sea and extending north of the Laptev Sea. 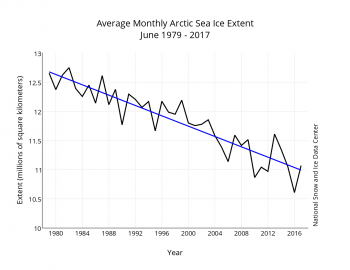 Figure 4. This figure shows that sea ice thicknesses for May 2017 were below the 2000 to 2015 average over most of the Arctic Ocean (areas in blue) except for the region north and west of the Svalbard archipelago (areas in red).

The University of Washington Seattle Pan-Arctic Ice Ocean Modeling and Assimilation System (PIOMAS) regularly produces maps of ice thickness anomalies (departures from the long-term average). PIOMAS is based on a coupled ice-ocean model that is driven by data from an atmospheric reanalysis, and also assimilates data on observed ocean conditions and ice thickness (e.g., from NASA IceBridge). The PIOMAS analysis suggests that, relative to the average over the period 2000 to 2015, ice thickness for May 2017 (when the melt season was just beginning) was below average over most of the Arctic Ocean, especially in the Chukchi Sea and north of the Canadian Arctic Archipelago. A small region with above-average ice thickness is depicted over the Atlantic side of the Arctic north and west of the Svalbard Archipelago, and in the Greenland Sea. Starting the melt season with below-average ice thickness raises the likelihood of having especially low September ice extent. 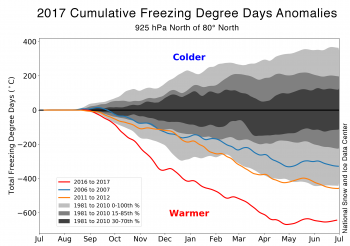 Figure 5. The figure shows departures from average in cumulate freezing degree days, extending from July 1 for a given year through July 1 of the next year, along with the range, 15th through 85th percentile and 30th to 70th percentile values over the base period 1981 through 2010.

Anomalies (departures from the average) in cumulative FDD illustrate the coldness of a given period relative to the long-term average (1981 to 2010). Figure 5 shows that most of the period from July 2016 to July 2017 was extremely mild and was milder (less cold) than both 2006 to 2007 and 2011 to 2012. September of both 2007 and 2012 ended up with very low September sea ice extent. This is consistent with below-average ice thickness seen in the PIOMAS data. Although conditions cooled in May and June, this likely had little impact on ice thickness. This is because ice in the Arctic reaches its maximum thickness earlier in the season during March or April. As noted earlier, ice retreated at a fast rate throughout June. This is likely linked to a thinner than average ice cover as seen in the PIOMAS analysis.

A slight decrease in the rate of sea ice growth at the end of June brought Antarctic sea ice extent back to daily record lows. Sea ice extent in the Bellingshausen, eastern Amundsen, and western Ross Seas was below average.

Our post on December 2016 ice conditions highlighted a precipitous drop in Antarctic sea ice extent in the Weddell and Ross Sea sectors during September, October, and November of 2016. A recent study by John Turner and colleagues links this pattern of sea ice decline to a series of strong storms, marked by long periods of warm winds from the north. These changing weather conditions are associated with large shifts in the Southern Annual Mode index (SAM index).