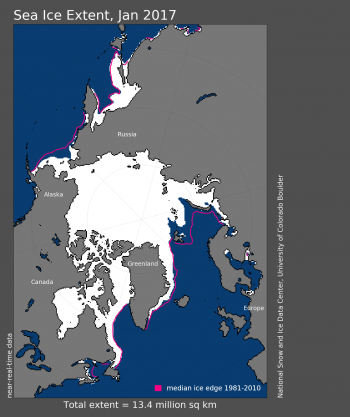 Ice growth stalled during the second week of the month, and the ice edge retreated within the Kara and Barents Seas, and within the Sea of Okhotsk. After January 16, extent increased at a more rapid pace, but the rate of ice growth was still below average for January as a whole. For a few days towards the end of the month, the extent was slightly greater than recorded in 2006, a year which also saw many record low days in January, but by the 30th it was tracking below 2006. Through most of January the ice edge remained north of the Svalbard Archipelago, largely due to the inflow of warm Atlantic water along the western part of the archipelago. However, by the end of January, some ice was found to the northeast and northwest of Svalbard. At the end of January, ice extent remained well below average within the Kara, Barents, and Bering Seas. 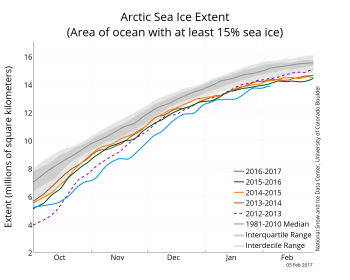 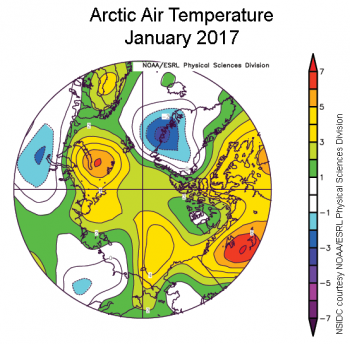 Figure 2b. The plot shows Arctic air temperature difference from average, in degrees Celsius, for January 2017.

Atmospheric circulation over the Arctic during the first three weeks of January was characterized by a broad area of below average sea level pressure extending over almost the entire Arctic Ocean. Higher-than-average sea level pressure dominated over the Gulf of Alaska and the North Atlantic Ocean south of Iceland. This set up warm southerly winds from both the northern North Atlantic and the Bering Strait areas, helping to explain the high January air temperatures over the Arctic Ocean. According to the analysis of NASA scientist Richard Cullather, the winter of 2015 to 2016 was the warmest ever recorded in the Arctic in the satellite data record. Whether the winter of 2016 to 2017 will end up warmer remains to be seen; conditions are typically highly variable. For example, during the last week of January, the area of low pressure shifted towards the Siberian side of the Arctic. In the northern Laptev Sea, pressures fell to more than 20 hPa below the 1981 to 2010 average. This was associated with a shift towards cooler conditions over the Arctic Ocean, which may explain why ice extent towards the end of the month rose above levels recorded in 2006. 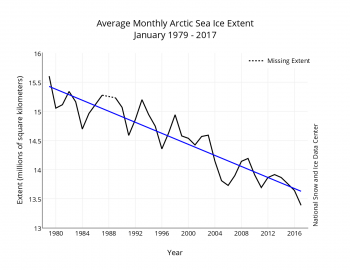 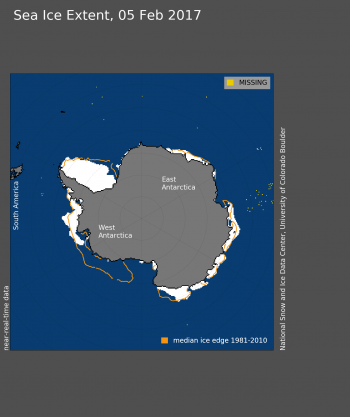 Figure 4. Antarctic sea ice extent for February 5, 2017 shows the Amundsen Sea nearly free of ice. The orange line shows the 1981 to 2010 median extent for that day. Sea Ice Index data. About the data

Extent is tracking at records low levels in the Southern Hemisphere, where it is currently summer. As shown in this plot for February 5, this is primarily due to low ice extent within the Amundsen Sea, where only a few scattered patches of ice remain. By contrast, extent in the Weddell Sea is now only slightly below average. This pattern is consistent with persistent above average air temperatures off western Antarctica.