Throughout August, Arctic sea ice extent continued to track two or more standard deviations below the long-term average. The month saw two very strong storms enter the central Arctic Ocean from along the Siberian coast. In the Antarctic, ice extent remained near average. 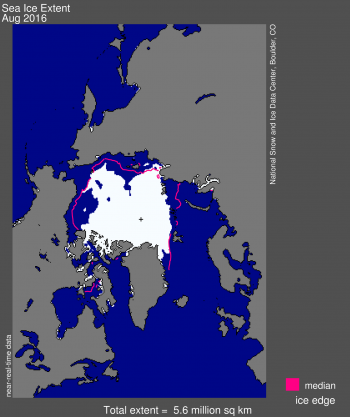 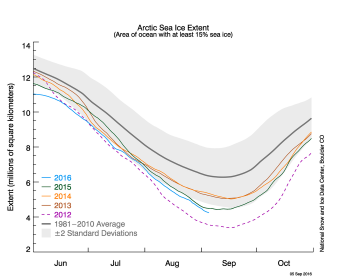 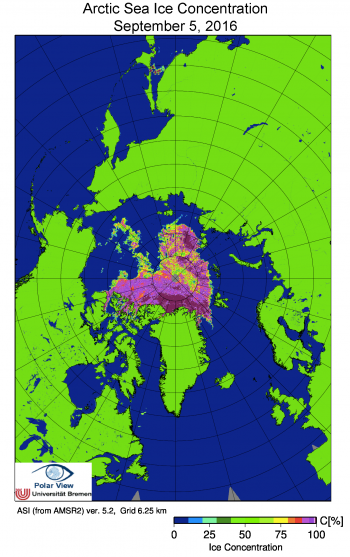 Figure 2b. The map shows Arctic sea ice concentration from the AMSR2 satellite instrument for September 5, 2016. Light blues and greens in ocean areas indicate areas of low ice concentration. The grey circle at the North Pole indicates where the satellite does not collect data, due to its orbit.

Air temperatures at the 925 hPa level were 1 to 3 degrees Celsius (2 to 5 degrees Fahrenheit) below average for a large area stretching from the northern Kara Sea, through the Laptev Sea, and into north-central Eurasia. Temperatures elsewhere over the Arctic Ocean were near average. Reflecting the generally stormy pattern through the month, sea level pressures were well below average (as much as 10 hPa) over the central and eastern Arctic Ocean. Two very strong cyclones entered the central Arctic Ocean in August from along the Siberian coast, bringing strong winds. On August 16, the central pressure of the first cyclone dropped to 968 hPa, nearly rivaling the storm in early August 2012 that attained a minimum central pressure of 966 hPa. On 22 August, the second storm started moving to the central Arctic Ocean along a similar track, and on August 23, attained a central pressure of 970 hPa.

Past studies have shown that stormy summers tend to end up with more sea ice at the end of the melt season than summers with high pressure over the central Arctic Ocean, primarily because stormy summers are both fairly cool and the wind pattern tends to spread the ice out. However, the impact of strong individual storms may be different—the 2012 event appears to have temporarily boosted ice loss by breaking up the ice cover, with the wave action tending to mix warmer waters from below to hasten melt. It may also be that, as the ice cover thins, its response to storms is changing.

It indeed appears that the August 2016 storms helped to break up the ice and spread it out, contributing to the development of several large embayments and polynyas. Some of this ice divergence likely led to fragmented ice being transported into warmer ocean waters, hastening melt. Whether warmer waters from below were mixed upwards to hasten melt remains to be determined, but as discussed below, these storms were associated with very high wave heights. 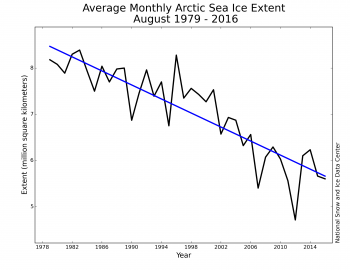 Arctic sea ice extent averaged for August 2016 was the fourth lowest in the satellite data record. Through 2016, the linear rate of decline for August is 10.4 percent per decade.

Large waves are common at high latitudes; 10-meter wave heights (33 feet) are not unusual for the Nordic Seas, and 15-meter wave heights (49 feet) can occur in the high latitudes of the Southern Ocean. However, large waves are a relatively new feature of the western Arctic Ocean. The height of waves is in part determined by surface wind speed, as well as the fetch (distance over open water that the wind can travel) and the duration of a wind event. A moderate sea ice cover damps ocean waves by absorbing and dispersing the wave energy through jostling of the ice floes against one another. A dense ice pack cover acts as a shield between the ocean and the surface wind, preventing wave formation.

In the latter half of the twentieth century, 4 to 6 meter waves (13 to 20 feet) rarely occurred in the western Arctic Ocean, but with more open water they have become more frequent, especially when strong storms enter the Arctic Ocean in late summer or early autumn. During the first of the two August cyclones discussed above, waves up to 5.9 meters (19 feet) were predicted. This occurred during the early part of the cyclone’s lifecycle (1800 UTC August 14), in the eastern Kara Sea. Further east, north of the New Siberian Islands, wave heights were estimated as high as 4.3 meters (14 feet) late on August 15. In this region, the waves were directly incident on the ice edge. In response, the ice edge retreated following the 4.3 meter waves on August 15. 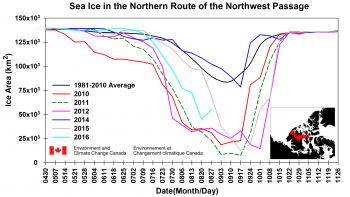 Figure 5. The time series shows total sea ice area for selected years and the 1981-2010 average within the northern route of the Northwest Passage. The cyan line shows 2016 and other colors show ice conditions in different years. Data are from the Canadian Ice Service.

The Northwest Passage refers to the fabled shortcut between the Atlantic and Pacific through the Canadian Archipelago. However, it is not one route. There is a northern, deep-water route through the Parry Channel, entered from the west through the M’Clure Strait and a shallower southern route, known as Amundsen’s route. Sea ice in the Parry Channel route has shown a sharp decline since the middle of July, but the channel is still not entirely ice free. Considerable ice remains in the western (M’Clure Strait) region and there are lesser amounts in the eastern regions. This is mostly (~80 percent) multiyear ice. Low ice years in the Parry Channel are typically the result of early summer breakup associated with high sea level pressure over the Beaufort Sea and Canada Basin that displace the Arctic Ocean pack ice away from the western entrance. Conversely, low sea level pressure anomalies over the Beaufort Sea and Canada Basin keep the Arctic Ocean pack ice up against the western entrance. This has been the case for much of the 2016 melt season. The southern (Amundsen’s) route is open but it is still uncertain whether the northern route will open in the coming weeks.

Even during mild ice years, thick multiyear ice is typically advected into these routes during the summer months. Multiyear ice is a significant obstacle for ships. Nevertheless, taking advantage of mild sea ice conditions, the 68,000-ton Crystal Serenity set sail from Anchorage, Alaska on August 16 for its 32-day journey through the Northwest Passage via Amundsen’s route. This is the largest ship thus far to navigate the Northwest Passage and is accompanied by an icebreaker ship and two helicopters. The ship sailed through the Northwest Passage in less than three weeks—52 times faster than Amundsen’s nearly three-year voyage.

On the other side of the Arctic, the Northern Sea Route appears mostly ice free.