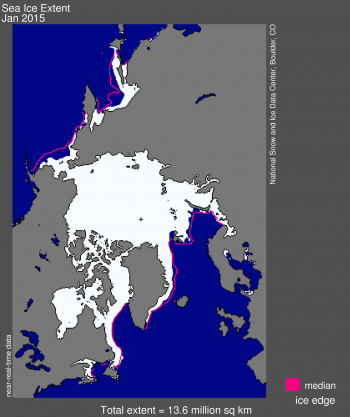 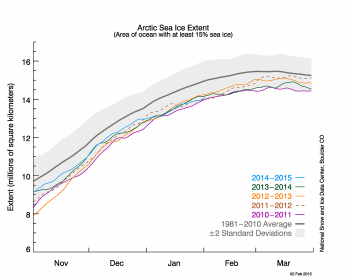 During most of January, the Arctic Oscillation (AO) was in a strongly positive phase. When the AO is in a positive phase, sea level pressure in the Arctic is particularly low, and sea level pressure is relatively high in the middle latitudes of the Northern Hemisphere. Variability in Arctic sea ice conditions is strongly influenced by the phase of the AO. Typically, during the positive phase of the AO, surface winds push ice away from the shores of Siberia, leading to the formation of more young, thin ice that is prone to melting out in summer. The positive phase also tends to increase the transport of thick, multiyear ice out of the Arctic through Fram Strait.

Air temperatures (at the 925 millibar level, about 3,000 feet above the surface) were mostly above average over most of the Arctic Ocean, with positive anomalies of 4 to 6 degrees Celsius (7 to 11 degrees Fahrenheit) over the Chukchi and Bering seas on the Pacific side of the Arctic, and also over the East Greenland Sea on the Atlantic side. 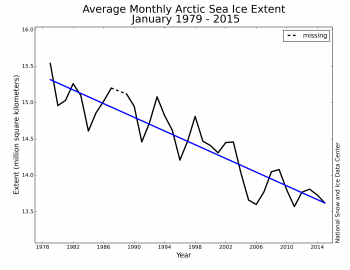 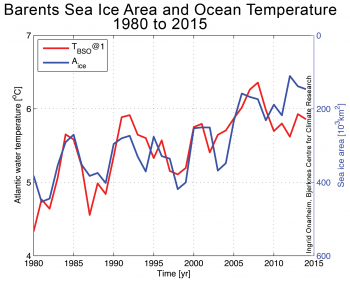 Variations in winter ice extent in the Barents Sea are well correlated with variations in overall Arctic sea ice extent, as assessed over the satellite record. This winter is an exception. Sea ice extent in the Barents Sea is fairly high compared to recent years, while it is low for the Arctic as a whole. According to colleagues at the University of Bergen, this is due to a reduced overall inflow of Atlantic waters. A maximum in the ocean heat transport occurred in the mid 2000s, yet since then, the inflow has in general lessened, both along the Norwegian coast, through the Fram Strait, and through the Barents Sea Opening between Norway and Bear Island. Variations in Atlantic inflow is a focus of ongoing research at the Bjerknes Centre in Bergen, as well as in other research centers in Europe. 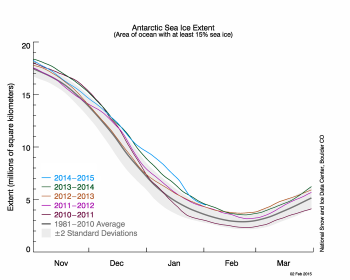 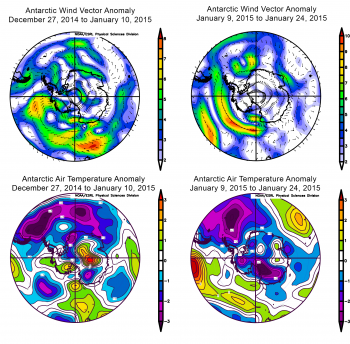 Weather conditions during late December and January help to explain these changes. In the northern Weddell Sea, southerly winds (more so than average) and cool conditions relative to the 1981 to 2010 average prevailed for late December and all of January, and sea ice there remained high relative to long-term averages for the month. For the northern Ross Sea, air temperatures at the 925 hPa level have been slightly above average for the entire period, but winds in this area shifted during January, from southerly (pushing ice outward) to northwesterly. The combination of northerly winds and slightly warm conditions seems to have reduced the ice extent anomaly significantly in this sector.

Schauer, U. and A. Beszczynska-Möller. 2009. Problems with estimation and interpretation of oceanic heat transport – conceptual remarks for the case of Fram Strait in the Arctic Ocean, Ocean Sci., 5, 487–494.