Arctic sea ice extent is well below average, and large areas of low concentration ice are observed in the Beaufort Sea and along the Siberian coast. However, it is highly unlikely to set a record low at the end of this year’s melt season. Antarctic sea ice extent remains at record highs. 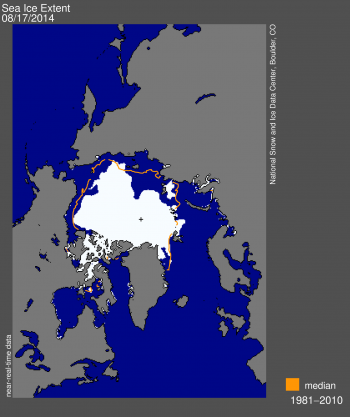 Sea ice declined at slightly slower than average rates through the first part of August. By mid-August, extent was similar to this time last year, which makes it unlikely that this year’s minimum extent will approach the record low level observed in September 2012. On August 17, sea ice extent was 1.03 million square kilometers (398,000 square miles) below the 1981 to 2010 long-term average and 1.42 million square kilometers (548,000 square miles) above that observed in 2012 on the same date. Ice extent remains below average everywhere, except near Franz Joseph Land and in the northern part of the Barents Sea. Extent is particularly low in the Laptev Sea where open water now extends to about 85 degrees latitude, less than 560 kilometers (350 miles) from the North Pole. This is the one region of the Arctic where ice loss has been exceptional in 2014 compared to recent summers. Ice extent is also very low in the East Greenland Sea, possibly as a result of reduced ice transport through Fram Strait. 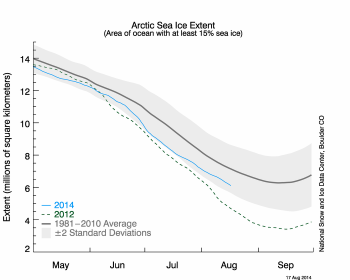 The first part of August was dominated by anomalously low sea level pressure over the Kara Sea, combined with anomalously high pressure over the central Arctic Ocean and Greenland, as well as the Beaufort and Chukchi seas. This led to warm air advection from the south over the East Siberian and Chukchi seas and extending into the central Arctic Ocean, with air temperatures at the 925 millibar height being nearly 8 degrees Celsius (14 degrees Fahrenheit) higher than average off the coast of Siberia near the New Siberian Islands. Sea ice concentrations in this region dropped compared to the beginning of August, and the waters along the coast of eastern Siberia are now mostly ice free. Ice concentrations are also low in the Beaufort Sea. Ice has continued to break up in the Kara Sea where it has been slow to melt out this summer. Nevertheless, air temperatures in the Kara Sea remain lower than average by 2 to 4 degrees Celsius (4 to 7 degrees Fahrenheit). As of mid-August, sea ice extent remains on track to end up somewhere between the sixth and the tenth lowest sea ice minimum. 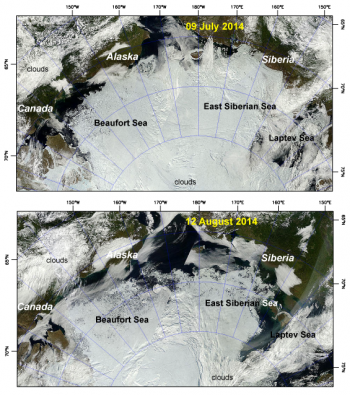 Figure 3. This image shows true-color composites of the Arctic for July 9, 2014 and August 12, 2014 from the NASA Moderate Resolution Imaging Spectroradiometer (MODIS).

Visible satellite imagery from NASA’s Moderate Resolution Imaging Spectroradiometer (MODIS) reveal a diffuse ice cover in the Beaufort Sea, as well as in areas of the Laptev and East Siberian seas. Despite low ice concentrations, ice extent is right at the long-term average for the region, in stark contrast to 2012 when the ice edge had already retreated to north of 75 degrees latitude. Ice remains extensive in the Northwest Passage through the channels of the Canadian Arctic Archipelago. On the Eurasian side, the Northern Sea Route is mostly open except that some ice still blocks Vilkitsky Strait, the narrow strait between the Siberian coast and the islands of Severnya Zemlya separating the Kara and Laptev seas. 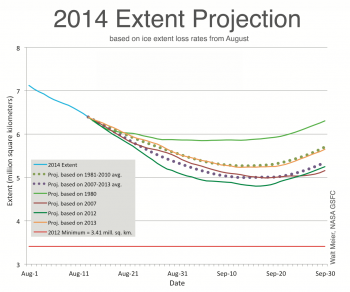 Figure 4. The graph above shows projections of ice extent from August 1 through September 30 based on previous years’ observed retreat rates appended to the August 12, 2014 ice extent. Sea Ice Index data. About the data

During August, sea ice extent declines more slowly as the sun starts to set in the Arctic and the sea ice minimum approaches. Thus, the window is closing on potential ice loss through the remaining summer. A simple way to estimate how much ice loss may occur during the rest of the summer is to extrapolate daily ice loss, using rates of ice loss from previous years. The approach provides a reasonable bracket on possible scenarios through September. Using the 1980 rate of ice loss yields the highest potential minimum this year, because the end of summer rate of ice loss in 1980 was very slow. The lowest potential minimum is estimated using the 2012 rate of ice loss, as there was rapid ice loss in 2012. No scenario suggests a minimum near the record low year of 2012. Most likely this year’s minimum will be between 5.0 and 5.5 million square kilometers (1.9 and 2.1 million square miles). 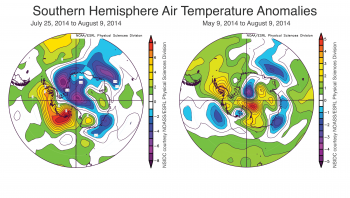 Antarctic sea ice remains at a daily record high, and 1.19 million square kilometers (459,000 square miles) above the 1981 to 2010 average. Sea ice extent is now higher than average nearly everywhere around the continent, except for a portion of the northwestern Weddell Sea. This has occurred despite the fact that air temperatures at the 925 hPa level in the Ross and western Amundsen Sea have been much higher than average, by up to 8 degrees Celsius (14 degrees Fahrenheit), for the past two weeks. Longer term, the preceding three months (mid-May to mid-August) have been slightly warmer than average over most of the Antarctic sea ice areas. This supports the idea that the record or near record high Antarctic ice extents of 2014 have been driven by wind patterns and ocean conditions as discussed in our July post.

Arctic sea ice extent declined at a fairly rapid rate through the first three weeks of July, but the loss rate then slowed due to a shift in weather patterns. In Antarctica, the advance of sea ice nearly halted for about a week in early July, and then resumed. At the end of the month, Antarctic extent was at or near a record high for this time of year. 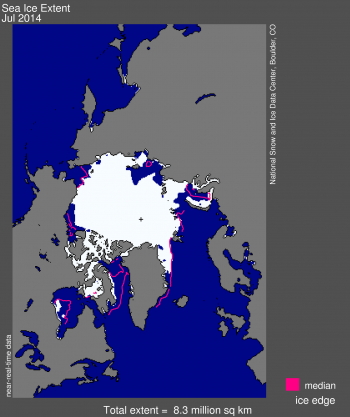 Ice extent is below average in nearly all sectors of the Arctic. Open water continued to grow in the Laptev and Beaufort Seas, reaching well north of 80oN in the Laptev Sea. By the end of the month, the Alaskan Coast was essentially free of ice except for small patches of very diffuse ice off Barrow. The Barents Sea, Hudson Bay, and Baffin Bay/Davis Strait are now essentially ice free. Large areas of low concentration ice in the central Beaufort Sea are likely to melt out in coming weeks. The Northwest Passage through the channels of the Canadian Arctic Archipelago remains choked with ice. Parts of the Northern Sea Route are still difficult to traverse because of high-concentration, near-shore ice between the Laptev and East Siberian seas and also north of the Taymyr Peninsula. 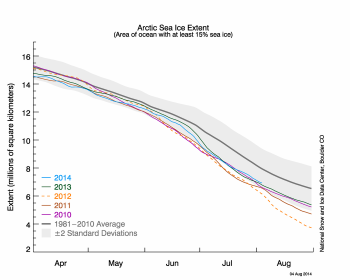 The slower ice loss later in the month reflects a shift in weather patterns. For much of the month, high pressure at sea level dominated the central Arctic Ocean and the Barents Sea. However, this pattern broke down and was replaced by lower-than-average pressure over the central Arctic Ocean. A low pressure pattern tends to bring cool conditions and the counterclockwise winds associated with this pattern also tend to spread the ice out. 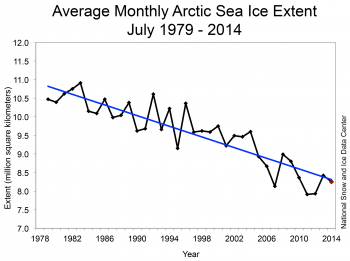 More news on the Antarctic 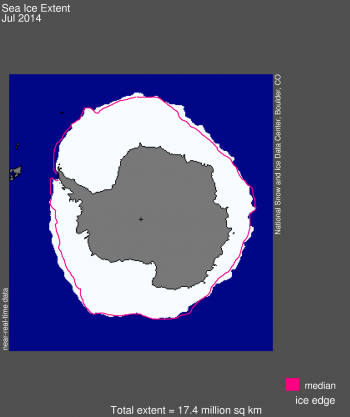 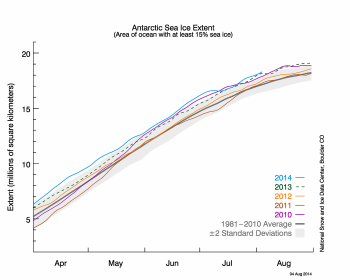 In our previous post, we noted that on July 1, Antarctic sea ice extent was growing rapidly, and could surpass the September 2013 record high extent (over the period of satellite observations). During early July, the advance of Antarctic sea ice extent nearly halted, but toward the end of the month, there was another period of rapid ice growth. Maximum extent is usually reached in September or October, at the end of the austral winter.

Many readers may be familiar with NSIDC’s Charctic interactive sea ice graph that allows one to plot daily Arctic ice extent for any year in the satellite record (1979 to present) and make quick comparisons with average conditions and between different years. NSIDC has recently added an Antarctic option to Charctic. We have done so in response to growing interest in Antarctic sea ice conditions and the very different behavior of Arctic and Antarctic sea ice. Just go to the Charctic site and click the button marked “Antarctic.”

The paper studied the Bootstrap algorithm, which has been used in several published reports of Antarctic trends, including the last two IPCC Assessment Reports. These reports suggested that the Antarctic sea ice extent shifted from a small, statistically insignificant upward trend in the early 2000s to a more substantial, and statistically significant upward trend in recent years. (NSIDC uses a different algorithm, called NASA Team, to estimate sea ice extent.)

The paper found that following an update to the algorithm in 2007, using the newer Version 2 of the Bootstrap algorithm produced Antarctic sea ice extent trends that were approximately two times larger than those derived using Version 1. Closer examination of the data showed a noticeable step change in extent at the point of transition to a new satellite sensor in 1991. This step change appeared to be related to an error in calibration between the sensors, rather than actually being an abrupt shift in Antarctic sea ice.

Using the newer version of the algorithm, Antarctic extent trends agree much more closely with the trends from the NASA Team algorithm used by NSIDC. Regardless, the expansion in Antarctic sea ice is confirmed by other groups using different techniques.