For the Arctic as a whole, ice growth for November was faster than average. However, the Kara and Barents seas remained largely ice free, contributing to above-average air temperatures in these regions. 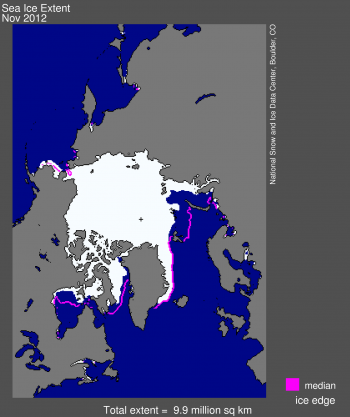 By the end of the month, the central Arctic Ocean had almost completely frozen over. However, the Barents and Kara seas remained largely ice free. Extent remained below normal in the Baffin Bay and Hudson Bay, but ice extent in the Bering Sea by the end of the month was greater than average, continuing a pattern seen in recent years. Extent in the Bering Sea was at record high levels last winter. 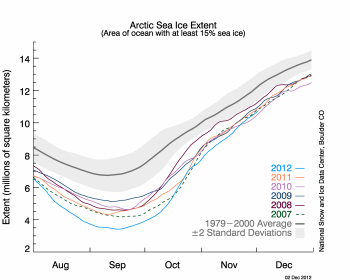 Extent can increase quickly during November because there is little solar energy and the ocean is rapidly losing the heat that it gained in summer. For the Arctic as a whole, ice growth for November 2012 was faster than average, increasing at an average rate of 98,600 square kilometers (38,100 square miles) per day. After remaining lower than levels observed in 2007 for most of the month, by November 30 ice extent matched or exceeded extent seen in 2007, 2006, and 2010. 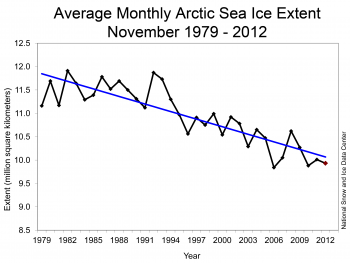 Average sea ice extent for November 2012 was the third lowest in the satellite record. This marks only the third year in the satellite record that November extent was below 10 million square kilometers (3.86 million square miles). Through 2012, the linear rate of decline for November Arctic ice extent is -4.8% per decade relative to the 1979 to 2000 average. 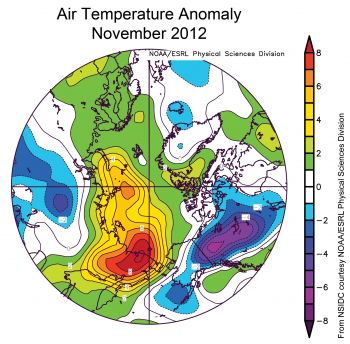 Figure 4. This image shows air temperature anomalies at the 925 hPa level averaged for November 2012, compared to averages over the period 1981 to 2010. Temperatures were above average over the East Siberian, Barents, and Kara seas.

November air temperatures at the 925 hPa level (approximately 3,000 feet) were above average over most of the Arctic Ocean. Notably, temperatures in the Barents and Kara seas were up to 6 degrees Celsius (11 degrees Fahrenheit) higher than average. This reflects in part the lingering open water in the regions, allowing strong upward transfers of heat from the ocean to the atmosphere. Unusually strong winds from the south contributed to the warmth and also helped keep the region ice free.

More striking were the unusually warm conditions over the ice-covered East Siberian Sea, where temperatures were 6 degrees Celsius (11 degrees Fahrenheit) above average. This appears to be due to persistent high pressure over the Bering Strait. Southerly winds on the west side of the high-pressure zone brought warm air into the East Siberian region. Colder, northerly winds on the east side of the high-pressure zone help explain the higher-than-average extent in the Bering Sea.