Sea ice extent in late winter can go up and down very quickly, getting pushed together or dispersed by strong winds. Ice extent usually reaches its annual maximum sometime in late February or March, but the exact date varies widely from year to year. 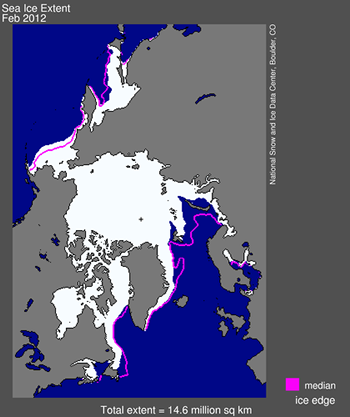 Continuing the pattern established in January, conditions differed greatly between the Atlantic and Pacific sides of the Arctic. On the Atlantic side, especially in the Barents Sea, air temperatures were higher than average and ice extent was unusually low. February ice extent for the Barents Sea was the lowest in the satellite record.  Air temperatures over the Laptev, Kara and Barents seas ranged from 4 to 8 degrees Celsius (7 to 14 degrees Fahrenheit) above average at the 925 hectopascal (hPa ) level (about 3000 feet above sea level).  In contrast, on the Pacific side, February ice extent in the Bering Sea was the second highest in the satellite record, paired with air temperatures that were 3 to 5 degrees Celsius (5 to 9 degrees Fahrenheit) below average at the 925 hPa level. 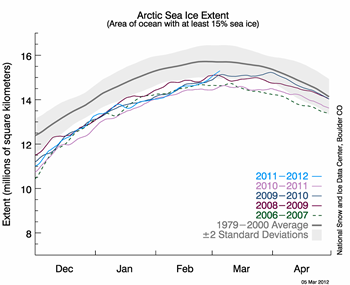 The graph above shows daily Arctic sea ice extent as of March 5, 2012, along with the ice extents for the previous four years. 2011 is shown in light blue, 2010 is in pink, 2009 in dark blue, 2008 is in purple, and 2007, the year with the record low minimum, is dashed green. The gray area around the average line shows the two standard deviation range of the data. Sea Ice Index data.

At the end of February, ice extent rose sharply. Data from the NSIDC Multisensor Analyzed Sea Ice Extent (MASIE) showed that the rise came mainly from the Bering Sea and Baffin Bay. In the Bering Sea and Baffin Bay, winds pushed the ice extent southward. Ice growth in the Kara Sea also contributed to the rise in ice extent. In the Kara Sea, westerly winds that had been keeping the area ice-free shifted, allowing the open water areas to freeze over. During late winter, ice extent can change quickly as winds push extensive ice cover together, or spread out ice floes over a greater area. 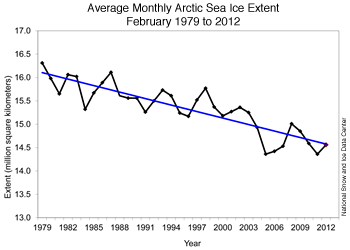 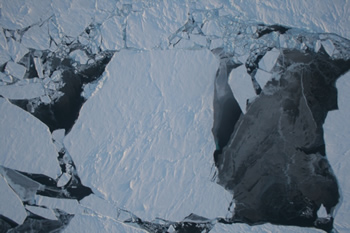 This photograph of sea ice near Greenland was taken on March 18, 2011 from the NASA P3 aircraft. The IceBridge mission is collecting data on ice thickness, an important measure of the health of sea ice.

IceBridge thickness data
Measuring ice thickness is critical to assessing the overall health of Arctic sea ice. The passive microwave data that NSIDC presents here provide only ice extent, a two-dimensional measure of ice cover. But ice can vary in thickness from a few centimeters to several meters, and scientists want to know if the ice pack is thinning overall as well as declining in extent. A new study by NASA scientist Ron Kwok compared ice thickness data collected by airplanes during the ongoing Operation IceBridge with thickness data from the NASA Ice, Cloud and Land Elevation Satellite (ICESat), which ended its mission in 2009. IceBridge is an airborne data-collection mission that started in 2009, in order to bridge the data gap between the first ICESat and ICESat-2, which is scheduled to launch in 2016.

Kwok found good agreement between simultaneous IceBridge and ICESat freeboard measurements made in 2009. Freeboard is the elevation of sea ice above the ocean surface, and provides a measure of ice thickness. These results show that IceBridge measurements will be able to bridge the gap between the ICESat and ICESat-2 satellite missions and add to other ice thickness data from the European Space Association (ESA) Cryosat-2. Satellite measurements of ice thickness provide a third dimension of information on the changing sea ice cover, helping scientists to more accurately assess the amount of sea ice in the Arctic.

Data collected by the IceBridge mission is archived and distributed by the NSIDC IceBridge Data program.

These images show the general effects of the positive phase (left) and negative phase (right) of the NAO. Red dots show the location of harp seal breeding grounds.

Regional ice conditions and harp seals
Many animals rely on sea ice as part of their habitat. Harp seals, for example, give birth to and care for their young on floes of sea ice. Recent research by David Johnston and colleagues at Duke University showed that harp seals in the northwest Atlantic have higher mortality rates during years when the North Atlantic Oscillation (NAO) is in its negative phase, a pattern that favors low ice cover in the Labrador Sea and Gulf of St. Lawrence, where harp seals breed.

This winter, the NAO has mostly been in a positive phase and ice conditions in the Labrador Sea and Gulf of St. Lawrence have been at near-normal levels. However, in recent years, ice conditions in the region have been very low. The study showed a longer-term decline in sea ice cover of up to 6% per decade across all North Atlantic harp seal breeding grounds since 1979. While harp seals are well-suited to deal with natural short-term shifts in ice conditions, they may not be able to adapt to the combined effects of both short-term variability and long-term climate change.