On March 18, 2012, Arctic sea ice extent reached its annual maximum extent, marking the beginning of the melt season for Northern Hemisphere sea ice. This year’s maximum extent was the ninth lowest in the satellite record. 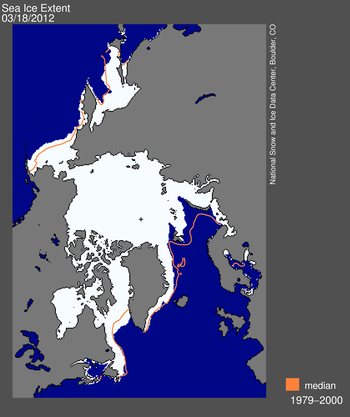 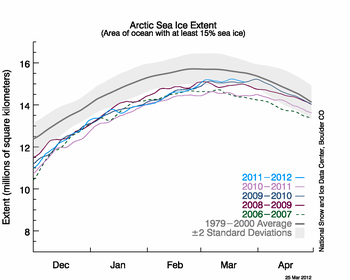 Conditions in context
As of March 23, ice extent has declined for five days. However, there is still a chance that the ice extent could expand again. Sea ice extent in February and March tends to be quite variable, because ice near the edge is thin and often quite dispersed. The thin ice is highly sensitive to weather, moving or melting quickly in response to changing winds and temperatures, and it often oscillates near the maximum extent for several days or weeks, as it has done this year.

Arctic sea ice extent is declining in winter as well as in summer months, although the decline is not as steep in the winter months. At the beginning of April, NSIDC scientists will release a full analysis of winter conditions, along with monthly data for March. For more information about the maximum extent and what it means, see the NSIDC Icelights post, the Arctic sea ice maximum.