Early in March, Arctic sea ice appeared to reach a maximum extent. However, after a short decline, the ice continued to grow. By the end of March, total extent approached 1979 to 2000 average levels for this time of year. The late-season growth was driven mainly by cold weather and winds from the north over the Bering and Barents Seas. Meanwhile, temperatures over the central Arctic Ocean remained above normal and the winter ice cover remained young and thin compared to earlier years. 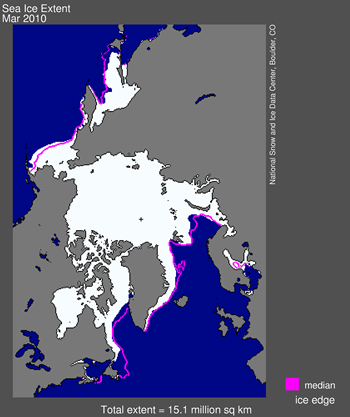 Ice extent was above normal in the Bering Sea and Baltic Sea, but remained below normal over much of the Atlantic sector of the Arctic, including the Baffin Bay, and the Canadian Maritime Provinces seaboard. Extent in other regions was near average. 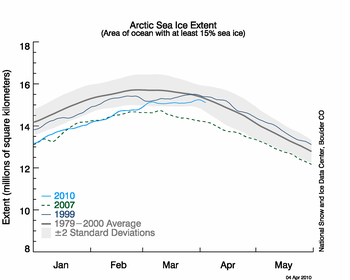 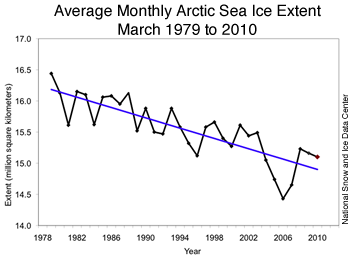 March 2010 compared to past years 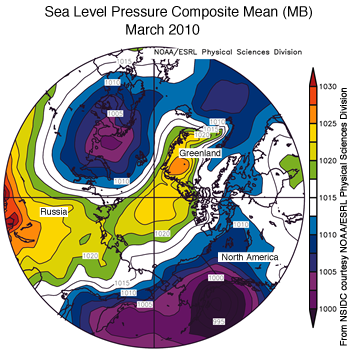 Figure 4. The map of sea level pressure (in millibars) for March 2010 shows high pressure over the central Arctic (areas in yellow and orange) and areas of low pressure over the Bering and Barents seas (areas in blue and purple). The low pressure systems over the Bering and Barents seas have helped to push the ice edge southward. —Credit: National Snow and Ice Data Center courtesy NOAA/ESRL Physical Sciences Division
High-resolution image

The maximum Arctic sea ice extent may occur as early as mid-February to as late as the last week of March. As sea ice extent approaches the seasonal maximum, extent can vary quite a bit from day to day because the thin, new ice at the edge of the pack is sensitive to local wind and temperature patterns. This March, low atmospheric pressure systems persisted over the Gulf of Alaska and north of Scandinavia. These pressure patterns led to unusually cold conditions and persistent northerly winds in the Bering and Barents Seas, which pushed the ice edge southward in these two regions. 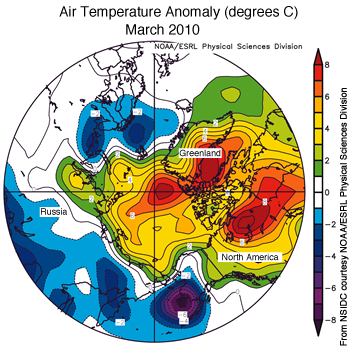 Figure 5. This map of air temperature anomalies for March 2010, at the 925 millibar level (roughly 1,000 meters or 3,000 feet above the surface), shows warmer than usual temperatures over most of the Arctic Ocean, but colder than usual temperatures in the Bering and Barents seas, where sea ice extent is above normal. Areas in orange and red correspond to positive (warm) anomalies. Areas in blue and purple correspond to negative (cool) anomalies. —Credit: National Snow and Ice Data Center courtesy NOAA/ESRL Physical Sciences Division
High-resolution image

Meanwhile, elsewhere in the Arctic 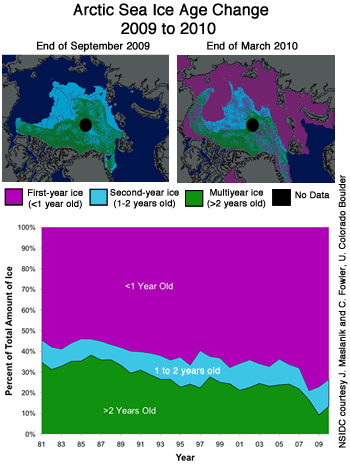 Figure 6. These images show the change in ice age from fall 2009 to spring 2010. The negative Arctic Oscillation this winter slowed the export of older ice out of the Arctic. As a result, the percentage of ice older than two years was greater at the end of March 2010 than over the past few years. —Credit: National Snow and Ice Data Center courtesy J. Maslanik and C. Fowler, CU Boulder
High-resolution image

The late date of the maximum extent, though of special interest this year, is unlikely to have an impact on summer ice extent. The ice that formed late in the season is thin, and will melt quickly when temperatures rise.

Scientists often use ice age data as a way to infer ice thickness—one of the most important factors influencing end-of-summer ice extent. Although the Arctic has much less thick, multiyear ice than it did during the 1980s and 1990s, this winter has seen some replenishment: the Arctic lost less ice the past two summers compared to 2007, and the strong negative Arctic Oscillation this winter prevented as much ice from moving out of the Arctic. The larger amount of multiyear ice could help more ice to survive the summer melt season. However, this replenishment consists primarily of younger, two- to three-year-old multiyear ice; the oldest, and thickest multiyear ice has continued to decline. Although thickness plays an important role in ice melt, summer ice conditions will also depend strongly on weather patterns through the melt season.

At the moment there are no Arctic-wide satellite measurements of ice thickness, because of the end of the NASA Ice, Cloud, and Land Elevation Satellite (ICESat) mission last October. NASA has mounted an airborne sensor campaign called IceBridge to fill this observational gap.