Arctic sea ice extent has begun its seasonal decline towards the September minimum. Ice extent through the winter was similar to that of recent years, but lower than the 1979 to 2000 average. More importantly, the melt season has begun with a substantial amount of thin first-year ice, which is vulnerable to summer melt. 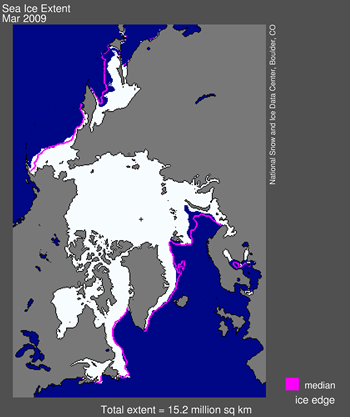 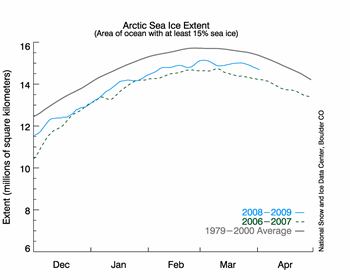 At the end of last summer’s melt season, extensive areas of open
water froze up quickly, once air temperatures cooled in
the fall. By February 28, ice extent had reached its annual maximum.
Although the maximum ice extent occurred slightly earlier than usual, ice extent remained close to the maximum level through much
of March. 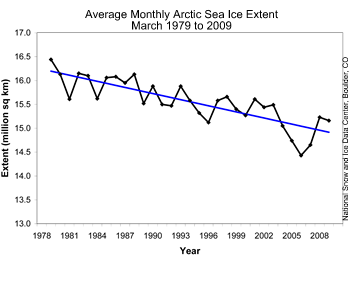 March 2009 compared to past Marches

Including March 2009, the past six years have all had ice extent substantially lower than normal. The linear trend indicates that for the month of March, ice extent is declining by 2.7% per decade, an average of 43,000 square kilometers (16,000 square miles) of ice per year. 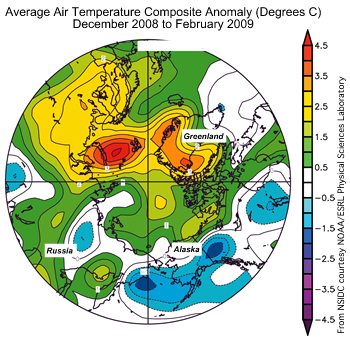 Overall, it was a fairly warm winter in the Arctic. Air temperatures over the Arctic Ocean were an average of 1 to 2 degrees Celsius (1.8 to 3.6 degrees Fahrenheit) above normal, with notable regional variations. The Barents Sea region was over 4 degrees Celsius (7.2 degrees Fahrenheit) warmer than average this winter. This warmth probably stemmed from unusually low sea ice extent in the region throughout much of the winter, which allowed the ocean to pump heat into the atmosphere. The Bering Sea, in contrast, experienced a cool winter, with temperatures 1 to 2 degrees Celsius (1.8 to 3.6 degrees Fahrenheit) below average. The cooler conditions were consistent with the above-average sea ice extent in the Bering Sea through much of the winter. 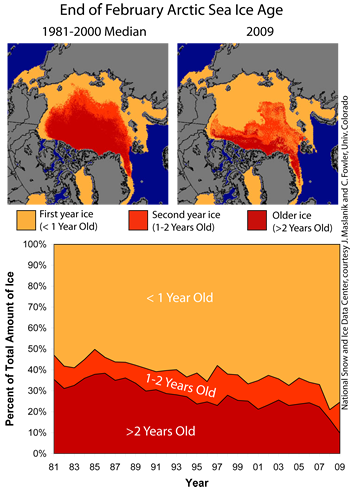 How vulnerable is the ice cover as we go into the summer melt season? To answer this question, scientists also need information about ice thickness. Indications of winter ice thickness, commonly derived from ice age estimates, reveal that the ice is thinner than average, suggesting that it is more susceptible to melting away during the coming summer.

As the melt season begins, the Arctic Ocean is covered mostly by first-year ice, which formed this winter, and second-year ice, which formed during the winter of 2007 to 2008. First-year ice in particular is thinner and more prone to melting away than thicker, older, multi-year ice. This year, ice older than two years accounted for less than 10% of the ice cover at the end of February. From 1981 through 2000, such older ice made up an average of 30% of the total sea ice cover at this time of the year.

While ice older than two years reached record lows, the fraction of second-year sea ice increased compared to last winter. Some of this second-year ice will survive the summer melt season to replenish the Arctic’s store of older ice; however, in recent years less young ice has made it through the summer. To restore the amount of older ice to pre-2000 levels, large amounts of this young ice would need to endure through summer for several years in a row.