After reaching its minimum extent on September 19, Arctic sea ice grew rapidly through the first half of October before slowing down late in the month. Even with that rapid growth, ice extent for October was the third lowest for that month in the satellite record. Air temperatures in the Arctic were higher than normal. 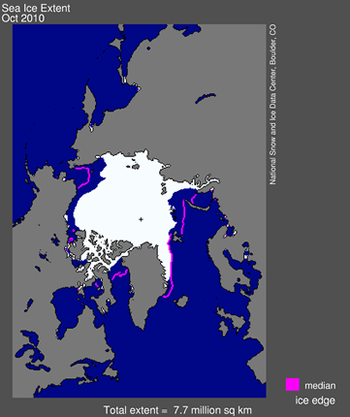 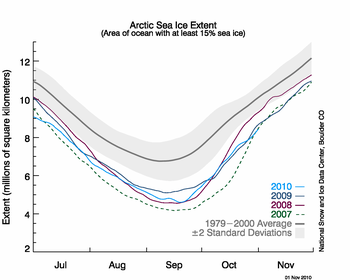 Following the minimum ice extent on September 19, the ice cover quickly expanded as polar darkness returned to the Arctic and air temperatures dropped. Ice grew at an average daily rate for the month of October of 92,700 kilometers per day (35,800 square miles per day). This was similar to the growth rate in 2009, but slower than the growth rate following the 2007 and 2008 minimum ice extents. It was slightly faster than the 1979 to 2000 average rate of 82,200 square kilometers (31,700 square miles) per day. 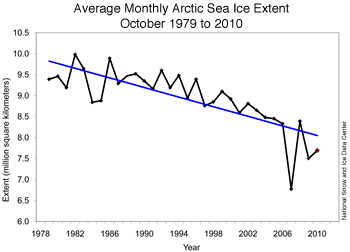 October 2010 compared to past years

Even with the rapid ice growth at the beginning of the month, October 2010 had the third-lowest ice extent for the month in the satellite record. The linear trend for October steepened slightly from -5.9% per decade to -6.2% per decade. 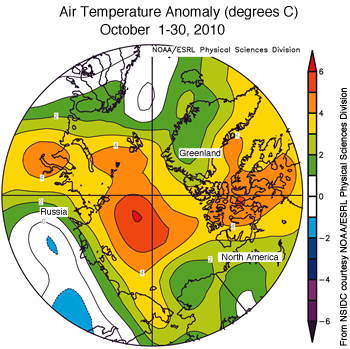 Figure 4. This map of Arctic air temperature anomalies shows warmer-than-usual conditions over much of the Arctic Ocean through the month of October.—Credit: NSIDC courtesy NOAA/ESRL PSD
High-resolution image

While air temperatures were below freezing over much of the Arctic in October, they were 4 to 6 degrees Celsius (7 to 10 degrees Fahrenheit) higher than normal. The warm conditions resulted partly from regions of open water releasing heat to the atmosphere, and in part from an atmospheric circulation pattern that brought warm air from lower latitudes to the Arctic.

As noted in previous posts, open water in summer absorbs heat from the sun that would normally be reflected back to space by the bright sea ice cover. In order for the ocean to refreeze in autumn, it must first release the heat accumulated during summer in these open water areas to the atmosphere. While the unusually warm temperatures tend to be focused over areas of open water, winds can move this heat around, warming other regions of the Arctic. 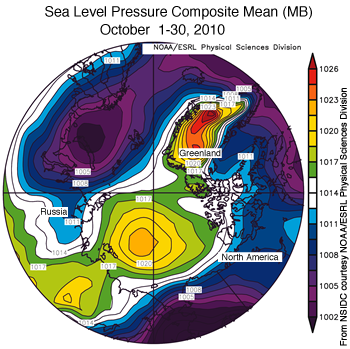 Figure 5. The map of sea level pressure for October 1 to 30, 2010, shows a high-pressure system cenetered over the Beaufort and Chukchi sea and Greenland, and low pressure over the Kara and Barents seas. This pattern tends to bring warm air from lower latitudes into the Arctic.—Credit: National Snow and Ice Data Center courtesy NOAA/ESRL PSD
High-resolution image

In addition to the effects from open water, weather patterns also contributed to warm conditions in some areas. For most of October, a high-pressure system sat over the Beaufort and Chukchi seas and Greenland, while unusually low pressure dominated the Kara and Barents seas. This pattern resembles the atmospheric pattern observed in October 2009, bringing warm air from lower latitudes to warm the Arctic.

The warming effects of open water, caused by the loss of summer sea ice cover, could add another twist to the warmer Arctic weather trends lately seen in the Arctic. NOAA researcher James Overland recently noted connections between warmer air temperatures in the lower Arctic atmosphere and atmospheric circulation at lower latitudes, in the 2010 NOAA Arctic Report Card.