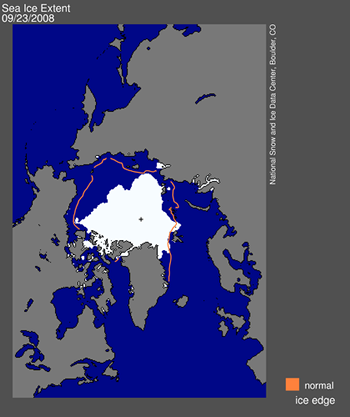 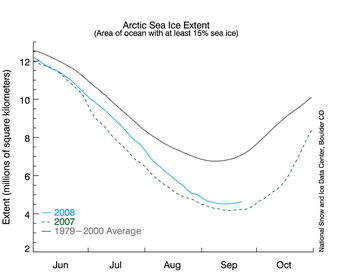 Arctic sea ice extent, after reaching its seasonal minimum last week, has begun its annual cyclical increase in response to autumn cooling. The ice will grow over the cold, dark winter months and reach its maximum annual extent sometime next March.

During the intervening time, NSIDC will continue to provide updates on conditions. Also, note that as the season of ice growth progresses, NSIDC will slide the x-axis in Figure 2 to focus on the five-month window around the most current month. In our January entry, we will include a calendar-based full-year timeseries showing January 2008 through December 2008 extent compared to 2007 and to the 1979 to 2000 average. 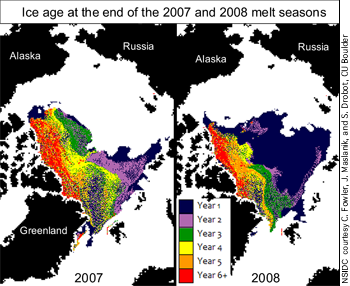 Perhaps the most interesting aspect of the 2008 melt season was the higher-than-average retention of first-year sea ice (see earlier entries, including April 7).  Relatively thin first-year ice is more prone to melting out completely than older, thicker ice. However, more of this year’s first-year ice survived the melt season than is typical. Sea ice age maps from Sheldon Drobot, our colleague at the University of Colorado at Boulder, show that much more first-year ice survived in 2008 than in 2007. This is one of the reasons that 2008 did not break last year’s record-low minimum.

One cause of the high first-year ice survival rate was that this summer was cooler than in 2007. Lower temperatures slowed the melt rate in the early part of the season. While conditions in August favored rapid ice loss, they were not enough to make up for this early-season “cushion.” Furthermore, much of this year’s first-year ice was located at higher latitudes than in 2007, covering even the geographic North Pole. Regions that are far north have lower melt rates because they receive less solar energy than more southerly regions. 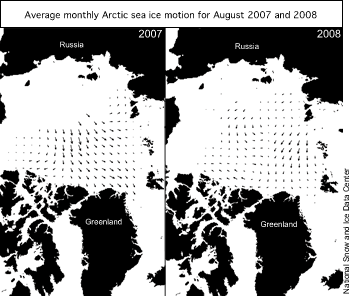 Sea ice motion also helps determine how the ice will fare each melt season. In 2007, a strong northward sea ice motion at the end of the melt season pushed ice floes together, compacting the ice. The tightly packed ice and high temperatures worked together to create a record-low extent.

This year, the wind patterns were different, leading to a less compacted ice cover. This, paired with slower summer melt, helped keep the overall extent larger.