After reaching its seasonal maximum on February 25, the beginning of the melt season was interrupted by late-season periods of ice growth, largely in the Bering Sea, Davis Strait and around Labrador. Near the end of March, extent rose to within about 83,000 square kilometers (32,000 square miles) of the February 25 value. The monthly average Arctic sea ice extent for March was the lowest in the satellite record. 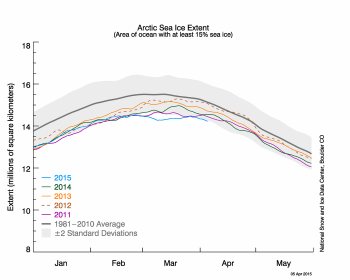 The change in total Arctic sea ice extent for March is typically quite small. It tends to increase slightly during the first part of the month, reach the seasonal maximum, and then decline over the remainder of the month. Following the seasonal maximum recorded on February 25, this year instead saw a small decline over the first part of March, and then an increase, due largely to periods of late ice growth in the Bering Sea, Davis Strait and around Labrador. On March 26, extent had climbed to within 83,000 square kilometers (32,000 square miles) of the seasonal maximum recorded on February 25. Despite this late-season ice growth, analysts at the Alaska Ice Program report in their April 3 post that ice in the Bering Sea was very broken up. 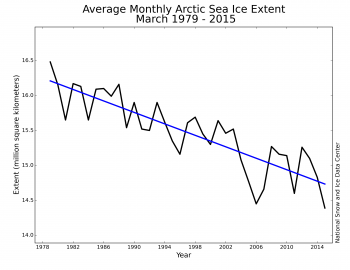 The monthly average Arctic sea ice extent for March was the lowest in the satellite record. Through 2015, the linear rate of decline for March extent is 2.6% per decade.

Overview of the winter season 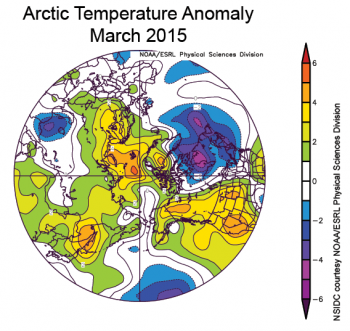 As discussed in our previous post, the winter of 2014/2015 was characterized by an unusual pattern of atmospheric circulation, with the jet stream lying well north of its usual location over Eurasia and the North Pacific, and then plunging southwards over eastern North America. This pattern was associated with unusually warm conditions extending across northern Eurasia, the Bering Sea and Sea of Okhotsk, Alaska and into the western part of the United States, contrasting with cold and snowy conditions over the eastern half of the United States. The record low seasonal maximum in ice extent recorded on February 25, 2015 was largely due to low extent in the unusually warm Bering Sea and Sea of Okhotsk. This pattern of atmospheric circulation and temperatures largely continued through March.

Recent work by Dennis Hartmann of the University of Washington suggests that this unusual jet stream pattern was driven, at least in part, by a particular configuration of sea surface temperatures over the tropical Pacific known as the North Pacific Mode, or NPM. The NPM pattern consists of above-average sea surface temperatures in the western Tropical Pacific that extend north and east towards the California coast and across the far northern Pacific Ocean. While the better-known El-Nino-Southern Oscillation (ENSO) pattern has been in a neutral state for the past few winters, the NPM has been in an extreme positive state since the summer of 2013. 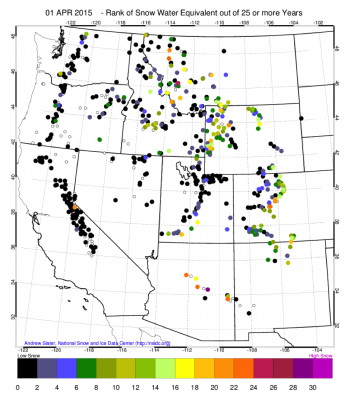 Figure 5. This map shows the rank of snow water equivalent measured at SNOTEL sites across the western U.S. A rank of 1 (black dots) corresponds to the lowest SWE in the SNOTEL record; a rank of 31 (magenta dots) is the highest.

Typically, the snowpack peaks around April 1. As seen in Figure 5, the April 1 snowpack over most of the western United States is far below average. At many sites, snow water equivalent is at historic lows for this time of year. Conditions are somewhat better along the Front Range of Colorado and in Arizona, Wyoming and Montana.

The cause of these warm conditions is familiar to people living in mountainous regions: a foehn or chinook wind, in which air flows up and over a steep mountain ridge. On the windward side, moisture is wrung out of the air mass in the form of rain or snow. As the air descends on the leeward (downwind) side, it compresses and warms.

This airflow pattern is a key part of the climate conditions that led to past ice shelf disintegrations in the region, such as the dramatic break-up of the Larsen B Ice Shelf in 2002. Air pressure patterns during the event indicated a near-stationary high pressure center in the Drake Passage north of the Antarctic Peninsula, and a strong area of low pressure at the base of the Peninsula, favoring the foehn pattern. Events like this have been recorded by a network of sensors installed by the National Science Foundation LARISSA project.  This network recorded temperatures as high as 16.9° Celsius (62.4° Fahrenheit), westerly winds up to 23 meters per second (45 miles per hour), and a ~100 hour period of temperatures above freezing over the Larsen B area. A recent publication by a colleague at the Scripps Institute of Oceanography describes the impact of foehn or chinook patterns on ice shelf and sea ice stability in the region, making use of the network of Automated Meteorology-Ice-Geophysics Observing Systems (AMIGOS) and other weather sensors in the region.