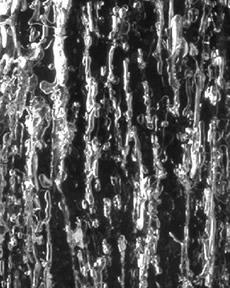 A photograph in natural light of the vertically oriented pores in congelation ice.

Ted Maksym, United States Naval Academy
conglomeric cryogenic fabric
a distinct soil micromorphology, resulting from the effects of freezing and thawing processes, in which coarser soil particles form compound arrangements.
consolidated pack ice
pack ice in which the floes are frozen together; ice cover 10/10ths.
construction methods in permafrost
special design and construction procedures required when engineering works are undertaken in permafrost areas.
constructive metamorphism
snow metamorphism that adds molecules to sharpen the comers and edges of an ice crystal.
continuous permafrost
geographic area in which permafrost occurs everywhere beneath the exposed land surface with the exception of widely scattered sites, such as newly deposited unconsolidated sediments that have just been exposed to the freezing climate; mean annual soil surface temperatures are typically below -5 degrees Celsius (23 degrees Fahrenheit).
continuous permafrost zone
the major subdivision of a permafrost region in which permafrost occurs everywhere beneath the exposed land surface with the exception of widely scattered sites.
convection
the transport of energy resulting from the concerted movement of molecules in coherent groups; contrasts with conduction in which energy is transported by the random motions of molecules; atmospheric convection is nearly always turbulent and results in the vertical transport and mixing of atmospheric properties.
convection cloud
cumuliform cloud which forms in the atmosphere as a result of convection; such clouds are also called clouds of vertical development, a cloud that has its base in the low height range but extends upward into the middle or high altitudes.
coriolis force
apparent force, due to the rotation of the earth, which acts normal to, and to the right of the velocity of a moving particle in the northern hemisphere, the movement of the particle being considered relative to that of the earth.
cornice
an overhanging accumulation of ice and wind-blown snow, characteristically found on the edge of a ridge or cliff face.
crack
any fracture or rift in floating ice not sufficiently wide to be described as a lead.
creep
a way that snow or ice can move by deforming its internal structure.
creep of frozen ground
the slow deformation (or time-dependent shear strain) that results from long-term application of a stress too small to produce failure in the frozen material.
creep strength
the failure strength of a material at a given strain rate or after a given period under deviatoric stress.
crevasse
open fissure in the glacier surface.
Image 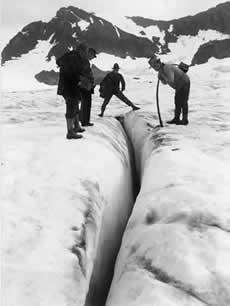 Explorers examine a crevasse on Lyman Glacier in 1916.

United States Forest Service., archived at the World Data Center for Glaciology, Boulder, CO
crevasse hoar
a kind of hoarfrost; ice crystals that develop by sublimation in glacial crevasses and in other cavities with cooled space and calm, still conditions under which water vapor can accumulate; physical origin is similar to depth hoar.
crust
a hard snow surface lying upon a softer layer; crust may be formed by sun, rain or wind, and is described as breakable crust or unbreakable crust, depending upon whether it wil break under the weight of a turning skier.
crust-like cryostructure
the cryostructure of a frozen deposit of angular blocks that are coated with ice, whereas large spaces between the blocks are not filled with ice.
cryoconite
A deposit of dust and soot, often bound by microbial mats, that is formed on melting glaciers and ice sheets. The deposits are often found in pothole-like pockets on the ice surface.