All
A B C D E F G H I J K L M N O P R S T U V W Y Z
buried ice
ice formed or deposited on the ground surface and later covered by sediments.
Buys Ballots Law
Meterological law which states that if you are standing with your back to the wind in the Northern Hemisphere, low pressure will be on your left, and high pressure will be on your right. Ballot was a 19th century Dutch climatalogist.
calve
break off from a larger ice shelf or ice sheet into the water.
calving
process by which ice breaks off a glacier's terminus; usually the term is reserved for tidewater glaciers or glaciers that end in lakes, but it can refer to ice that falls from hanging glaciers.
Image 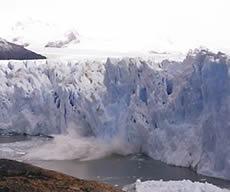 Martyn Clark
calving glacier
glacier that loses material by calving, usually a glacier that terminates in sea, lake, or river water.
carbon sink
A reservoir of carbon dioxide that is increasing in size.
catchment glacier
a semipermanent mass of firn formed by drifted snow behind obstructions or in the ground; also called a snowdrift glacier or a drift glacier.
cave ice
ice formed in a closed or open cave.
chattermarks
striations or marks left on the surface of exposed bedrock caused by the advance and retreat of glacier ice.
Image 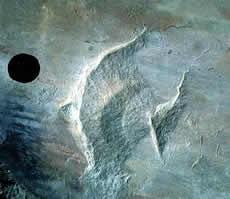 Close up of chatter marks, Mt. Sirius, Antarctica. Lens cap in the photo is five centimeters across.

Tom Lowell, University of Cincinnati
chinook
a warm wind blowing down an incline; a kind of katabatic wind.
circumpolar vortex
the large-scale cyclonic circulation in the middle and upper troposphere centered generally in the polar region; also called polar vortex.
cirque
bowl shape or amphitheater usually sculpted out of the mountain terrain by a cirque glacier.
Image 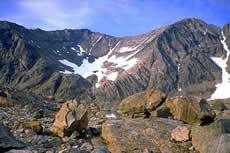 Cirque on Cirque Mountain in the Torngat Mountains, Newfoundland, Canada.

Hazen Russel, Natural Resources Canada, copyright Terrain Sciences Division, Geological Survey of Canada
cirque glacier
glacier that resides in basins or amphitheaters near ridge crests; most cirque glaciers have a characteristic circular shape, with their width as wide or wider than their length.
cirrocumulus
a principal high-level cloud type (cloud genus), appearing as a thin, white patch or layer of cloud without shading, composed of very small elements in the form of grains, ripples, etc., merged or separated, and more or less regularly arranged; most of the elements have an apparent width of less than 1 degree.
cirrostratus
a principal high-level cloud type (cloud genus), appearing as a transparent, whitish cloud veil of fibrous (hair-like) or smooth appearance, totally or partially covering the sky, and often producing halo phenomena, either partial or complete.
cirrus
a principal high-level cloud type (cloud genus), appearing as detached clouds in the form of white, delicate filaments or white or mostly white patches or narrow bands; these clouds have a fibrous (hair-like) appearance, or a silky sheen, or both; because cirrus elements are too narrow, they do not produce a complete circular halo.
clear sky
sky with a total cloud cover of less than one okta (or one-tenth in the united states).
climate
synthesis of weather conditions in a given area, characterized by long-term statistics (mean values, variances, probabilities of extreme values, etc.) of the meteorological elements in that area; polar climate (arctic climate) is generally the climate of a geographical polar region, most commonly taken to be a climate which is too cold to support the growth of trees.
climate change
a study dealing with variations in climate on many different time scales from decades to millions of years, and the possible causes of such variations; (1) in the most general sense, the term climate change encompasses all forms of climatic inconstancy (that is, any differences between long-term statistics of the meteorological elements calculated for different periods but relating to the same area) regardless of their statistical nature or physical causes; climate change may result from such factors as changes in solar activity, long-period changes in the earth's orbital elements (eccentricity, obliquity of the ecliptic, precession of equinoxes), natural internal processes of the climate system, or anthropogenic forcing (for example, increasing atmospheric concentrations of carbon dioxide and other greenhouse gases) (2) the term climate change is often used in a more restricted sense, to denote a significant change (such as a change having important economic, environmental and social effects) in the mean values of a meteorological element (in particular temperature or amount of precipitation) in the course of a certain period of time, where the means are taken over periods of the order of a decade or longer.
climate model
representation of the climate system based on the mathematical equations governing the behavior of the various components of the system and including treatment of key physical processes and interactions, cast in a form suitable for numerical approximation with computers.