Explorer on Skillet Glacier in 1936. Bergschrund is visible as the dark band of ice in the background.

bergy bit
large chunk of glacier ice (a very small iceberg) floating in the sea; bergy bits are usually less than 5 meters (15 feet) in size and are generally spawned from disintegrating icebergs.
Bermuda high
the semipermanent subtropical high over the North Atlantic Ocean, especially when it is located over the western part of the ocean; the same high over the eastern part of the Atlantic is called the Azores high; on mean charts of sea level pressure, this high is one of the primary centers of action in northern latitudes.
beset
situation of a vessel surrounded by ice and unable to move.
bight
an extensive crescent-shaped indentation in the ice edge, formed either by wind or current.
blind lead
a lead closed off on all sides within the ice pack.
blizzard
winds of at least 35 miles per hour along with considerable falling and/or blowing snow reducing visibility to less than one-quarter mile for a period of at least three hours (extremely cold temperatures are often associated with dangerous blizzard conditions, but are not a formal part of the modern definition).
block field
a surficial layer of angular shattered rocks formed in either modern or pleistocene periglacial environments.
blow hole
opening through a snow bridge into a crevasse or system of crevasses which are otherwise sealed by snow bridges; a snowdrift usuallly forms on the lee side.
blowing snow
an ensemble of snow particles raised by the wind to moderate or great heights above the ground; the horizontal visibility at eye level is generally very poor.
bora
a cold wind blowing down an incline; a kind of katabatic wind.
boreal forest
the forested region that adjoins the tundra along the arctic tree line, which has two main divisions: its northern portion is a belt of taiga or boreal woodland, while its southern portion is a belt of true forest, mainly conifers but with some hardwoods; on its southern boundary the boreal forest passes into mixed forest or parkland, prairie, or steppe, depending on the rainfall.
bottom bergs
icebergs that originate from near the bottom of a glacier; the color is usually black from trapped rock material or dark blue because of old, coarse, bubble-free ice; they sit low in the water due to the weight of the embedded rocks.
bottom temperature of snow cover
temperature measured at the base of the snow cover during mid- to late-winter (February/March).
branched-valley glacier
glacier that has one or more tributary glaciers that flow into it; distinguished from a simple valley glacier that has only a single tributary glacier.
Image 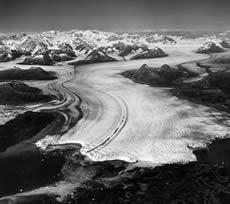 United States Geological Survey. Archived at the World Data Center for Glaciology, Boulder, CO
brash ice
accumulation of floating ice made up of fragments not more than 2 meters (6.6 feet) across, the wreckage of other forms of ice.
brine
small droplets of highly saline water that form in pockets between ice crystals, as sea ice forms and expels salt into the underlying ocean water.
BTS method
method to predict the presence or absence of permafrost in a mountain area, using measurements of the bottom temperature of snow cover mid- to late-winter.
bummocks
smooth hills of ice that form on the bottom of sea ice from eroding keels, particularly during the summer melt.
buoy weather station
a buoy, either fixed or floating, which carries instruments for sensing various meteorological elements and for transmitting the data by radio.