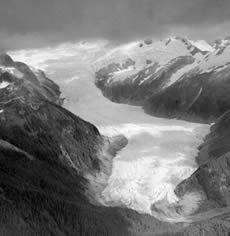 Muddy River Glacier carves its way through forested mountains near Frederick Sound in southeast Alaska. Typical of mountain glaciers, it is constrained on all sides by mountainous terrain.

U. S. Navy. Archived at the World Data Center for Glaciology, Boulder, CO
alpine layers
annual accumulations of snow and dust on a glacier.
altitudinal limit of permafrost
the lowest altitude at which mountain permafrost occurs in a given highland area outside the general permafrost region.
altitudinal zonation of permafrost
the vertical subdivision of an area of mountain permafrost into permafrost zones, based on the proportion of the ground that is perennially cryotic.
altocumulus
a principal middle level cloud type (cloud genus), white or gray, or both white and gray, which occurs as a layer or patch with a wave aspect, the elements of which appear as laminae, rounded masses, rolls, etc; these elements usually are sharply outlined, but they may become partly fibrous or diffuse; they may or may not be merged, and they generally have shadowed parts; most of the regularly arranged altocumulus elements have an apparent width of 1 - 5 degrees.
altostratus
a principal middle level cloud type (cloud genus) in the form of a grayish (gray) or bluish cloud sheet or layer of striated, fibrous, or uniform appearance, totally or partly covering the sky; the layer has parts thin enough to reveal the position of the sun; halo phenomena do not usually occur.
anabatic wind
any wind blowing up a steep incline or mountain; the opposite of katabatic wind.
analysis
in synoptic meteorology, a detailed study of the state of the atmosphere over a particular region based on the actual observations.
anchor ice
submerged ice which is attached to the bottom.
anemometer
an instrument which measures wind speed or wind speed and direction; a cup anemometer measures the wind speed from the speed of rotation of a windmill which consist of 3 or 4 hemispherical or conical cups, each fixed to the ends of horizontal arms attached to a vertical axis; a byram anemometer is a variety of the cup anemometer; a counting anemometer has cups or a fan whose rotation is transmitted to a technical counter which integrates directly the air movement speed; a hand anemometer is small portable anemometer held at arm's length by an observer making a wind speed measurement; a pressure tube anemometer (dines anemometer) is an instrument which derives wind speed from measurements of the dynamic wind pressures - wind blowing into a tube develops a pressure greater than the static pressure, while wind blowing across a tube develops a pressure less than the static, this pressure difference is proportional to the square of the wind speed.
anemorumbograph
a Russian anemograph (recording anemometer) which is equipped with a device to record the wind direction in addition to wind speed.
anemorumbometer
a Russian anemometer combined with a vane to determine the wind direction.
aneroid barometer
an instrument for measuring atmospheric pressure; it is constructed on the following principles: an aneroid capsule (vidie capsule, which is a thin, disk-shaped box or capsule, usually metallic) is partially evacuated of gas, and is restrained from collapsing by an external or internal spring; the deflection of the spring will be nearly proportional to the difference between the internal and external pressures; magnification of the spring deflection is obtained both by connecting capsules in series and by mechanical linkages.
anomaly
deviation of a meteorological quantity value in a given region from the normal (mean) value for the same period.
antarctic circle
the line of latitude 66° 34′ S (often taken as 66.5° S); along this line the sun does not set on the day of the summer solstice, and does not rise on the day of the winter solstice.
antarctic polar front
also known as the antarctic convergence; the southern front of the antarctic circumpolar current that separates the antarctic zone in the south from the polar frontal zone in the north; taken by many to delineate the actual northern boundary of the antarctic zone; characterized by sea surface temperatures near 5°6° C and a salinity minimum of 33.834.0 psu produced by high rainfall.
antarctic zone
the region between the antarctic circle (66° 34′ S) and the South Pole; climatically, the limit of the zone may be set at about 60° S, poleward of which the prevailing westerly winds give place to easterly or variable winds; over most of this region the average temperature does not rise above 0°C (32°F) even in summer.
anti-icing
the prevention of ice accumulation of aircraft, ships and other objects; the most common measures are heating or applying a dressing by brush or spray to weaken adhesion and facilitate removal.
anti-syngenetic ice wedge
an ice wedge that grows progressively downwards into a receding slope, in a direction normal (perpendicular) to the surface.